Moving this post to the head of the list, I present a recently expanded sampling of what this blog has been about. Occasional rant aside, it's been my goal to let people into the operating room, and into the life and thoughts of a surgeon; to share my take on some surgical conditions, and sometimes just to get a laugh. Memorable Patients : I've told stories about people who made a big impression here , (the most stool I've ever seen in a belly) here , (when my partner got sick) here , (she killed her caregiver, and almost killed herself) here , (thirteen years old, and I couldn't save her) here (until the end, she kept bringing me food) here , (kidney cancer in his pancreas, and he kept on truckin') here , (bleeding so fast, I could hear it) here , (no stomach, kept eating steak) here , (breast-heart connection?) here , (an extreme test of faith) and here . (a screw-up in a great guy) Series On Diseases, Organs, And Conditions: Breast Cancer on
95 comments
Read more 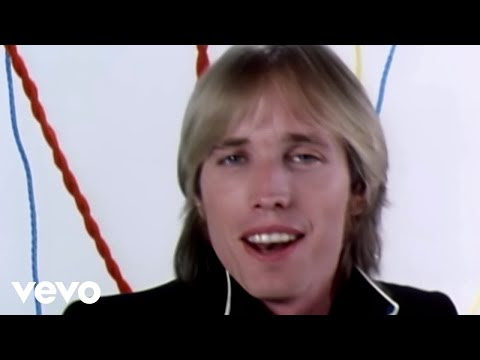  1 Because of what is, I sent this in before final election results. Perhaps they’ll be known, sometime.  No matter what, and as nice as the prospect of returning to honest, competent governance is, Trumpism is far from vanquished. Sixty-some-million voters considered Trump’s ceaseless torrent of lies, inciting hatred for fellow citizens, taking credit for things he didn’t do, refusing to admit failures, his and his family’s cashing in on his office, his racism and encouragement of white supremacists, kidnapping and putting children in cages, no plans for the next four years other than more lying and grift, and said, “More, please.”  The question of how that’s possible was answered, succinctly, by Madison Cawthorn, twenty-five-year-old, newly-elected US Representative from North Carolina. Having previously boasted that he’d crossed off a bucket-list item by visiting Hitler’s home in Berchtesgarden, and claimed that Cory Booker “wants to ruin white males,” his first action after his
Post a Comment
Read more

I'm Hardly A Poet, And This Here Will Show It 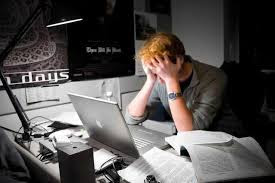 Rather than writing my usual tome, I’ll end twenty-twen with a post-Christmas poem. There’s no point pretending it’s been a good year, As several things became perfectly clear:  No longer a nation that’s in it together,  We won’t be till Trumpists can face up to whether, They’ll re-value truth and can end their reliance, On people who’ve told them that such things as science, Are kidnapping, cannibal, liberals’ lies. So it’s perfectly fine to go out for supplies, With a face that’s defiantly, proudly unmasked. For Americans’ “freedom” means not being asked, To consider your neighbors and act within reason, Not now and not ever, not even this season, In which we’re reminded that sacrifice still, Is a virtue worth holding. But few of them will. To those who are willing to follow the rules, We’re glad you consider masks worthwhile tools. But unlike that reindeer’s whose schnozz they say glows, Your mask won’t do harm if it covers your nose. And maybe those saying they’ll not take the va
Post a Comment
Read more

This Is Who They Are 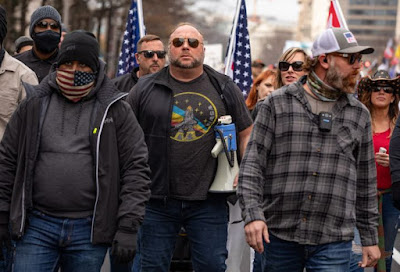 Featured guest at last week’s pro-Trump, “Stop the Steal,” Proud Boils rally in D.C., Reich-wing radio hero Alex Jones had this to say: “ We will never back down to the satanic pedophile globalist new world order and their walking-dead reanimated corpse Joe Biden. And we will never recognize him. So I don’t know who’s going to the White House in 38 days, but I sure know this: Joe Biden is a globalist, and Joe Biden will be removed one way or another. ” “One way or another.” Subtle as an NDA for a prostitute. And the armed and strutting delusionists cheered. After hearing much the same from Mike “I beg your pardon” Flynn, Trump’s first-born National Security Adviser and current Qanon acolyte (only the best people), the engorged deplorables roved through D.C., burning BLM flags and other displays from Black churches. “Very fine people,” Trump once called them. “Stand back and stand by,” he’d signaled. For this moment, evidently. It’d be wrong to suggest that everyone who buys into or
Post a Comment
Read more 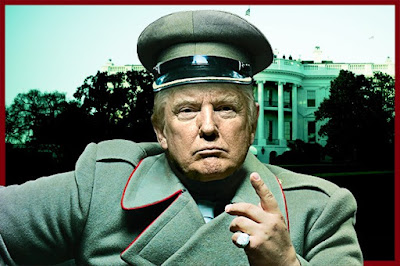 Science confirms consistent neurophysiological and psychological differences between conservatives and liberals. How they react to threats. Their reliance on the observable and their response to presented facts. Evolutionary biologists have theories, but it’s intuitive that, in addition to rationalists, primitive societies benefitted from people who don’t need no damn proof to react to perceived threats. Noises. Shadows. Gut feelings. It could avoid becoming a meal. Who knows why such brains remain in circulation? Individuals are safer now. More often than not, there’s time to think, evaluate. Threats from saber-tooth tigers (or, if you believe certain preachers, dinosaurs) are uncommon. Yet, having out-survived their benefit to society, such paranoid, no-need-for-facts people persist. Mysteriously, these evolutionary throwbacks appear to reside mostly in today’s retro-exceptional United States, and only in one political party. A few days ago, reporters asked every Republican member of
Post a Comment
Read more

Fraud. It's Everywhere, I Tell You! 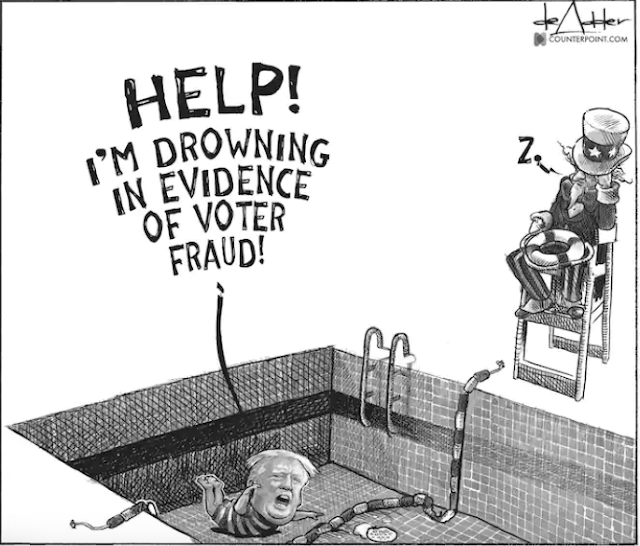 So much has befallen us during a brief columnar break, it’s hard to choose where to resume. But let’s go with Trump, about whose disregard for and danger to our country there’s no longer doubt. Maybe he believes his own lie that, but for a massive, super-coordinated plot, involving both parties in several states, undetectably faked ballots, highly selective voting machines, and secrets kept by thousands of people, he won the election. Fraud so carefully constructed that its very invisibility, repeated denial by Republican election officials and now, even Attorney Generally-compliant Barr, PROVES its existence. Once and always the conman, Trump has raised over $170 million by flooding gullible supporters with pleas to help “save” the election, set up so he can use most of it however he wants. Delusion or deception, out more he rants, in more he rakes. Millions of planted, nurtured, and harvested Republicans believe. Maybe even Rudy, whose embarrassing act has been serially thrown out of
Post a Comment
Read more 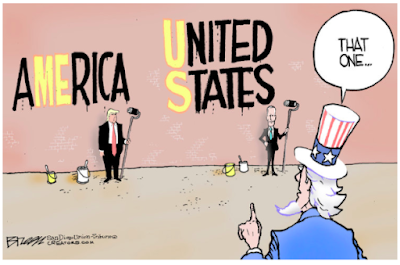 Some consider my “tinyurls” annoying, and hardly anyone checks them. Just this once, though, before discussing Trump’s and Republicans’ claims about a fraudulent election, it’d be helpful if readers were to see this .   Also helpful is Lindsey Graham on the subject: “If Republicans don’t challenge and change the U.S. election system, there will never be another Republican president elected again.”  Okay, thanks. Now we understand. Because it always has been, this is about minority Republicans maintaining power. And because it never has been, it’s not about what’s best for the country. Not even in this extraordinary time, when there’s so much more at stake; namely, our physical, economic, and social health; and the livability of this overheating planet. Foxians accuse Democrats of hypocrisy in urging Republicans to give Biden a chance when they didn’t for Trump. Well, there’s a difference. From the moment he entered politics, Trump trafficked in division and untruth. He encouraged vi
Post a Comment
Read more 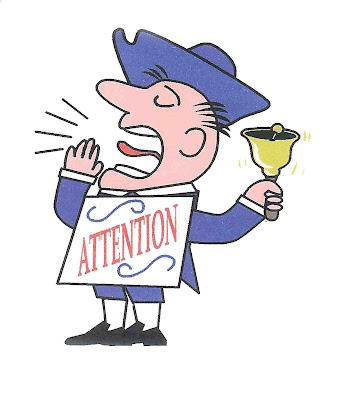 Well, I've done it. I've just created a new blog, which will become the place for my rants. Surgeonsblog, if it ever revives, will revert to what it once was -- a place for insights and information about surgery and surgeons. My new blog is where I'll froth and foam. It's called "Cutting Through The Crap." You can find it here . There (and on this post), readers can comment if they so choose. I hope people will find their way to the new place; and I hope there'll eventually be reasons to return here as well.
25 comments
Read more

August 27, 2009
In a comment on my previous post, a series of slides is recommended. I like the cartoon above even better. In simplicity there can be great truths.
20 comments
Read more 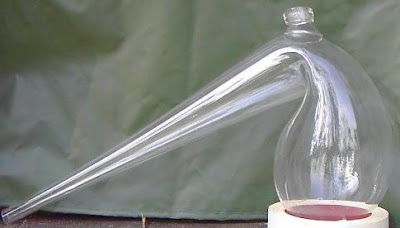 Sooner or later, in any discussion of health care reform (to the extent that screaming and fear-mongering can be gotten past and actual thoughts exchanged), the issue of tort reform is raised. On that subject I'm of two or more minds. Neither a student of the various proposals nor particularly well-versed on the veracity of claims and counter claims about tortophobia adding to costs of medical care, I can only speak based on personal experience. Which is why I'm multi-minded. I've seen good and bad. I don't think I altered my practice style to avoid malpractice suits, but I can see why people would. The central issue is this: there's a difference between malpractice and adverse outcomes . Most certainly, the one leads to the other; but the other does not imply the one. Were that distinction properly made and encoded in the law, the rest of the issue would become moot. If malpractice suits were about bad care -- actual errors, poorly thought-out diagnoses or treatm
25 comments
Read more
More posts