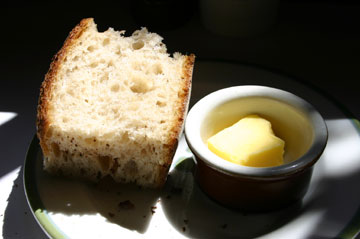 Hernia repair is surgical bread and butter. It's so much so that "hernia equivalent" has been used to measure surgical work: how does the difficulty of an operation compare to that of a hernia; how many "hernia equivalents" does the average surgeon do in a week; how many should she? And when attempts have been made to quantify surgical difficulty in terms of relative reimbursement, hernia repair is often the base unit. If a hernia is worth "X" bucks, then a colon resection is worth 2.3 "X" bucks. Or something scientific like that. Repairing hernias, evidently, is the essence, the mother's milk, the calling card of the general surgeon. Ridding the world of ruptures is what separates the surgical sheep from the surgical goats. Is that why it's an intern's case?

Other than removing various lumps and bumps, fixing a hernia is generally the first crack an intern gets at "doing" an operation. It's a good example of how it works: a good teacher can take you through an operation -- sometimes even making you feel as if you actually did it -- without your having the slightest understanding of what you've just done. I could pick up some tissue with a forceps in each hand, holding it in such a way that there's no place you can cut other than what I'm showing you. I can use my fingers or a retractor or two to expose an area -- and only that area -- in such a way that you'd know the next move if you hadn't the faintest idea on your own. Cutting the hernia sac away from the rest of the spermatic cord can, with a large hernia, get sort of confusing: dissecting off the blood vessels to the testicle, and the vas deferens, one can get a little lost if one isn't very experienced. But by holding this, peeling away that, the knowledgeable assistant can keep everyone above water. Plus, basic as it is, there are a few tricks of surgical technique that can be imparted which have crossover to other kinds of dissection. It's a thrill at each end of the knife. As an intern, just using the tools and gaining experience in handling various tissues -- how to turn the needle holder as you place a suture, how tight to tie, millions of little things that need learning -- is exhilarating even as it's frightening. Don't want to look like an idiot, don't want my hands to be shaking, do want to be able to answer the inevitable questions about groin anatomy. (Hint to would-be surgeons: forget about the so-called "conjoined tendon:" you really don't understand hernia repair until you understand the transversalis fascia.) As a teacher, imparting the pearls of wisdom, and realizing that you understand it well enough to teach it is a thrill of its own. (It's possible, of course, to learn an inferior method, based on incomplete understanding, and to teach the same ad infinitum. Sadly, it happens.)

"Hernia equivalent" sounds so pejorative. To a young surgeon looking ahead, the hope is to have a practice more exciting than one consisting primarily of hernia repairs. Myself included. But I always found them pleasing to do: each is a little different from the last -- some quite challenging. And except for the emergencies -- the strangulations -- most hernia repairs are low-key, done in a surgery center, with the stresses of the day insulated and few. Time to talk casually with the crew, or with the patient when when done under local. Tidy, fun, clear-cut, appreciated. Nothing wrong with that. And with time, I evolved my own way of doing them, using a little common sense, maybe some creativity, which afforded me the satisfaction of predictably happy patients. There were days when I did six or more at a time, in my four-hour block of time at my favorite surgery center. Nice days, those.

I'd guess that if you were about to have an operation, you'd like to think that everything about it has already been figured out: that there's no need for improvement; that you've entered the operating room in the jet age, and not as the cousin of a Wright brother. Maybe it's like buying a stereo, or an HDTV. Next year's version will always be better. There was a time when a bottle of whiskey and a leather strap was state-of-the-art for anesthesia. Likewise, there are many operations that in my lifetime as a surgeon have changed so much as to be nearly unrecognizable. Hernia repair is certainly among them. My apologies to those people who needed repair a couple of decades ago. Sorry about the recurrence, or the extra time off work. On the other hand, contrary to the perception of some that surgeons are a bunch of tight-ass, my-way-or-the-highway sort of people, it does show that, like actual human beings, we are constantly in search of better ways. After all, we get hernias, too.
Posted by Sid Schwab at 7:37 AM

Interesting...I learn a bit more about various aspects of "the other side of the relationship" every time you post.

My surgical observation day is scheduled for this month. I am comepletely looking forward to it, in large part because of reading your book and blog. Here's hoping I can keep my blood well circulated and not pass out under the warm rebreathed air beneath my mask...lol.
I am, however, under no false impression that the surgeon I will be following will be in the mood for a nursing student gaping over his shoulder.

Hey, Sid, it's my birthday, and my wonderful husband just gave me a copy of your book!

alexandra: glad to hear it

intelinurse: most surgeons (certainly me) really enjoy having students looking in. It makes us feel really smart.

Sid - my husband got a good chuckle out of that when I told him. :)

I'm more than halfway through; we went on a camping trip this weekend and I was reading a chapter here and there when I could. (I spent a fair amount of time in folding recliners....)

I really like the hernia blog you wrote. 1. My husband is now an intern in general surgery =) 2.I'm starting a gensurg spouse social club - to help others/spouses get a clue on what really happens. So, ur blog helps explain a lot =)