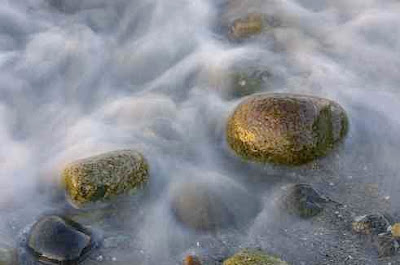 If you can imagine squeezing pink cotton candy, and if in your mind you can make it not sticky or sweet-smelling, you may have an idea of what a lung feels like. It's the coolest thing.

I found myself inside the chest more frequently in training than in practice, but it still happened often enough (almost always to work on the esophagus) to refresh my senses -- that airy texture; spongy and light. The way it conforms to a touch and molds itself, like a memory foam mattress; except in the case of the lung, the imprint becomes purple. And stays that way until the next breath.

When operating in the chest, not on the lung, we frequently impose upon the anesthesia person to use a special split breathing tube that can inflate one lung at a time, allowing the deflation of the one in the side of the chest in which one is working. It gets it out of the way very nicely. As it collapses (we may speed the process by pressing on it) the color of coral is replaced by that purple as it shrinks, leaving pink pockets here and there, looking empty and irregular. Later, watching the reinflation is the witnessing of a magical metamorphosis.

(Let me say here: a normal lung is fairy-tale pink, baby-cheek smooth -- a soft pillow and puffy. Clean, inspiring (pun intended), and as described, sadly rare. Even if a non-smoker, any city-dweller picks up enough crud from the air to deposit black spots throughout, changing that bubble-gum beauty into charcoal-pocked travesty. In a smoker: well, let's not even imagine it today. It's the opposite of beauty in the way steel wool is the opposite of creme brulee.)

It's when the critical part of the operation is over and the lung gets re-filled that the real thrill happens. Slowly and irregularly the lung expands, like a beaten fighter staggering to his feet, arms and legs not quite responding. Here and there the pink appears, pushing the purple crevices outward nearly randomly, erasing them, like strawberry milkshake bubbling up, filling them one by one, here, then there. As the anesthetist gives the breathing bag an extra long and extra forceful squeeze, you watch as the lung pops its way full: it's the opposite of crackling bubble-wrap. "OK, that's it," you say, and the breathing gets reverted to mechanical and regular. You can't resist touching the lung again, as it strains stiffly between the ribs; it both repels the touch and gives way, then refills the spot. If there were a soundtrack to the expansion, it would be like that of a wave receding over a gravelly shore.
Posted by Sid Schwab at 9:30 PM

man oh man was that a beautiful lung article! thank you, thank you. you captured the beauty and the privilege of it. i have to find a way to watch some surgeries in person. . but i know i wouldn't be close enough. . . i know the only thing that would satisfy me would be to assist. ah well, next lifetime.

your story reminded me a little of my median nerve release surgery. my hand surgeon told me that once he clipped the carpal ligaments (i THINK that's what he clipped), i could see the nerve "pink up" as the constriction was lifted and blood flow augmented. by damn, he was right- - well, not "pink" up, but whatever color betadine turns when there is more blood flow in the structure it's been swabbed on to.

thanks for a lovely, inspiring (hey! you started it!) post. :)

I mostly lurk here but I wanted to tell you that I love the posts where you make it clear how much you loved doing certain surgeries. This one was beautiful and in a weird way so was the amputation one. I hope I never need another surgery but if I do, I hope my surgeon loves what he's doing. Carver

In a high school physiology class taught by an inspired woman named Jean Hill, she demonstrated blood before and after oxygenation by bubbling oxygen through blood I assume she got from the stock yards. It was amazing.

When I was an animal control officer, I sometimes had to collect an animal that had died when struck and dragged by a vehicle. If it were fresh, the long smear that created would start out purple with extremity blood and end up so bright it was nearly "hunter orange" with lung blood. Gruesome, but aesthetically intense.

For those of us who don't know what our innards look like, you're a wonderful literary photographer.

One of the reasons I decided not to go into surgery was that, while assisting during abdominal surgeries, I would get incredibly hungry. It's not that the smells of an open abdomen are, shall we say, appetizing -- at all.
But taking it as some primordial tendency toward cannibalism, maybe foreseeing Hannibal Lector (who knows), I decided this was not a good thing.

Or is it Hall of Shame?

Greg: Naw, definitely fame. Or should I say "Gnaw?"

Absolutely cool. I've seen live lung from a safe, non-sterile distance and through the screen during VATS, but my only tactile experience has been heavy, wet, dusky structures (ie, cadaver)--the opposite of your description. Even with such a gross anatomy description (ha!), one could easily tell the smokers from the non-smokers (and yes, all were mottled). The dankness of the formalin-preserved decay still didn't stop certain students from leaving the lab for their smoke break...

Speaking from the other side of the ether screen, I love giving one-lung anesthesia, and watching what you guys do during these cases. It's a thrill for me to to reinflate the collapsed lung, although I enjoy watching it collapse too. Good description, too - I like to call it the snap, crackle, pop of reinflation.

I've never actually squeezed the lung, although I'd like to give it a try. That, and lyse abdominal adhesions - that looks like so much fun, too.

Surgery is truly an amazing occupation and calling.