Yugoslavs, Urine, and Me 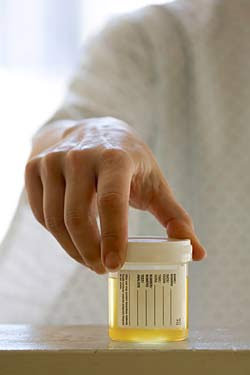 As the summer of my second year in med school approached, an announcement was posted (on a bulletin board I had previously made infamous, but that's another story) advertising need for a student who spoke Serbo-Croatian, to spend a summer in Yugoslavia helping on a research project. Since it was a requirement of graduation that we engage in some form of research, and since my fluency (at the time) in Russian was as close as they could come, I got the job, and off to Yugoslavia I went.

There's a mysterious illness over there. In very specific spots in several Balkan countries are pockets of a devastating kidney disease, known as the Balkan Nephropathy, or the Balkan Endemic Nephropathy, BEN. In many villages lots of people have died of it, young. Because of his expertise in streptococcal kidney disease, a professor at my med school had been asked to look into that possibility, and although he'd long since disproved any connection with strep, a lab remained in a small Bosnian town and a couple of our docs continued the school's involvement. So there I was.

Bijelina (pronounced "bYELL eenuh") is in the northeastern corner of Bosnia, near the junction of the Sava and Drina rivers. Of very mixed ethnicity, with churches and mosques cohabiting the place in peace (years later the city was "ethically cleansed," a scene of many crimes during the implosion of the country), in the late sixties Bijelina seemed to have a foot in each century. Horses and carts outnumbered cars, the central park was full of people at night, with smells of grilled meats and sounds of bands mixing magically in the muggy night air. The park was very near the little hospital in which I lived in a tiny room near the lab. Every night I walked the park, eating raznjici (razNEEchee, with a trill of the "r") and cevapcici (chuhVAHPcheechee) and drinking rich strawberry or cherry juices, or chewy dark beer, talking to folks in my mixture of Russian and local phrases. Dobr dahn. Lahku noch. Preeyatnuh. In the morning I'd go to the lab where a pretty young tech made Turkish coffee thick as paste, sweet, and strong enough to grate away any remnant of sleep.

With a Yugoslav medical student, I drove an old Land Rover every day to a tiny farm village, Velina Selo, where many people had contracted the disease. There, all the farming was done by horse-drawn wooden plow; the homes were huts of sun-dried mud bricks, most with a well, one or two with a single light-bulb, all with a grape-arbor for shade and a fence keeping the chickens in. And, always, a barrel of fermenting plums, for making the ubiquitous and painfully raw slivovic. In the village was a beautiful brass still, on a wooden cart, pulled from home to home by an elderly man who, in return for a piece of the action, distilled the festering and fly-fed mash into the brandy. I had more than one round, still warm, fresh from the still, aged in the time it took to bend my elbow. And no, it doesn't cause the disease. Not that one, anyway.

Our job was to gather information from each villager: where they farmed, from what source did they get their water. What did they eat in the fields, how often did they get food or water from outside the village. Other questions I don't remember. While my fellow student asked the questions in Serbo-Croatian, I wrote down the answers -- I could understand enough to do so without the need for translation. Then we collected urine samples from everyone, later to be analyzed for protein content and distribution of albumin and globulins: electrophorectic patterns had been correlated to early signs of the disease. And we made maps of drinking water as related to protein patterns.

I had an additional project. Because it had been noted that many children in the endemic areas had an unusual pattern of albumin in their urine, the question had been raised whether this was just a form of exercise proteinuria (heavy exertion is known to cause spillage of albumin into urine) or whether it was a marker for this (or some other) disease. So I put together a bicycle race. Gathering urine samples before and after the event, I organized a couple dozen young kids to race a few kilometers on their bikes, with the winner to get a few dinars (a hundred, I think. Or was it a thousand?), with everyone else to get some, too. Exercise, it turns out, produces the same pattern in them as it does in you and me, which answered -- to my satisfaction, anyway -- the question. (A paper was published that included my results, but not my name. PW Hall, whose name is included, was my supervisor, back in the USA most of the time.) Forty years later, the meaning, the cause, the solution remain elusive (although there's recent suggestion of connection with a chemical from local vegetation.)

The villagers were extremely grateful that we were there trying to help. They vied with each other for the privilege of feeding us. Every noon we'd find ourselves sitting under another arbor while chickens pecked our shoelaces, kids came from the fields bearing fresh vegetables and watermelons, and the mom produced an invariably amazing meal from within her meager home. Spicy chicken, stews, bread from heaven, salads, and pastries that belied their simple source. It was embarrassing, really, the effort that was made to please us. I doubt it was every-day fare we were being offered.

Each day we visited several homes, covering the entire village over the summer. Knowing our expected schedule for the next day, farmers would interrupt their work to be there. They were particularly excited that I was an American. Sleeves were pulled back, tattoos from the German prisoner-of-war camps were shown to me, with the words, quietly, looking into my eyes, many times, "It was Americans soldiers who freed me."
Posted by Sid Schwab at 6:50 AM

Did anyone do studies of albumin and renal function in domestic livestock in the area? I'd be interested in learning what domesticated poultry (chicken, ducks and geese) and cattle, goats and sheep linkages there are, given that most animals are slaughtered at young ages: adolescent or young adult, thus possible masking renal failure or sub-catastrophic signs of renal disease. Did the affected population consume organ meats?

Were parasitic organisms ruled out as causative or associative factors?

Was the affected population living in close proximity to livestock?

I love the bicycle race as framework for baseline function. That's ingenious! And fun!

No wonder the locals took such good care of you - you respected the language, the culture, provided genuine care and good humor, to boot!

AS to this: "It was embarrassing, really, the effort that was made to please us. I doubt it was every-day fare we were being offered."

You weren't an "everyday" visitor. :)

Small world! I was there with the US Army in 98 - attached to the Russian Airborne Brigade in Uglevic, just down the road from Bijelina. Bijelina was where we'd go to party in the evenings (being attached to the Russians, our alcohol consupmtion rules were a little.... relaxed). I spoke pretty good Russian also, and was suprised how well I could understand Serbian.

Dr. Bean, you should've gotten his book a while ago! It was a very good read, and I just loaned it to a classmate who is interested in becoming a surgeon.

Just last week I bought a secondhand book by a New Zealand Surgeon named Lindsay Rogers who details his experiences helping the Yugoslav partisans during the Second world war.

It's called Guerilla Surgeon
http://www.amazon.com/Guerilla-Surgeon-Surgeons-Experiences-Partisans/dp/B0014RZU30/ref=sr_1_4?ie=UTF8&s=books&qid=1208756270&sr=8-4.
I thought I should mention it just in case you felt like checking it out. I haven't read it yet, so I can't tell you if it's any good.

It's stories like these that make me want to get involved in international medicine! Thanks for sharing it with us.

I got excited when you mentioned the Drina - a Macedonian friend of mine recently lent me "The Bridge on the Drina" by Ivo Andric, which recounts the story of a Balkan town from Ottoman times up into the 20th century. Your description of the villagers in your town resonates with Andric's collection of stories. If you haven't already read it I highly recommend it!

gf: thanks for the recommendation! I'll check it out.

Very nice story, evokes many memories...I'm a young medical doctor currently living in NYC, hence familiar with both the disease and Bjeljina. I'm very glad you've experienced such great hospitality and respect. They must have liked you.

And I liked them, very much.