We are fortunate to live in a house perched on the edge of Puget Sound, on a high bank, looking north. Whidbey Island is in our view, as is Mount Baker, and the waters leading toward Deception Pass. Craning our necks a little, we can also see the Olympic Mountains. Winter or Summer, clear or storming, the view constantly changes. 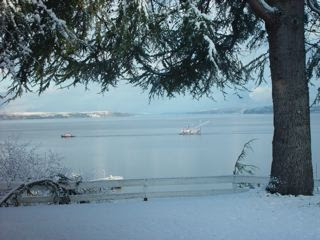 Sometimes the waters are flat and reflect the clouds (as in the title picture of this blog); sometimes winds blast down from the North, pushing waves and froth in our direction, and driving boats to struggle their way back to harbor. Tugs go by. We can hear them. Sometimes it's Navy ships, including an aircraft carrier once or twice a year; decked with planes and sailors in their whites. There's a pair of big red and white tugs, double-ended and always brilliantly clean, of the large ocean-going type that I see often. Many more, including one or two that are so tiny as to seem useless -- except that they aren't -- chuggle the waters, too. One is lugging a flotilla of logs as I type: it's churning the water behind it into a fine froth, struggling. The log raft is a hundred yards long, at least. When the weather gets a little warmer, the rafts will sport hitchhikers; dozens of sea lions fatly sunning a free ride into town. Seals for some reason (maybe they're unwelcome) seem only to swim by, never taking a ride. Our windows are open in the summer, and the barking often wakes us up. If the birds haven't.

When I was working, most days I left home in the dark, and returned in the darker. Although this house (which we've remodeled in one of our more successful creative endeavors) 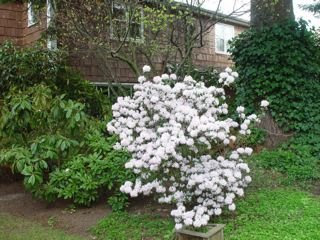 and its view were as much a part of what attracted me here as my wife's family and the job itself, it's not been until fairly recently that I've been able to enjoy it as much as I now do. I've seen seals catch salmon and flip them up vertical, then slug them down their gullets in one slide, disappointing the seagulls hanging by. Regularly in view are bald eagles, flying right at eye level just off our bank; sometimes with prey in their talons, their screech no longer surprising, but still thrilling. Cats need to be careful. The eagles nest about fifty yards away in a dead tree; we've watched babies pop their heads up, fledge, fly away. Juveniles have perched in our cedar tree, right outside the window.

Ferries are within view, on both sides of their route, leaving more or less at the same time from each dock, occasionally having to divert around tugs or the Navy. We used to walk down on Sunday mornings and take a ride over and back for breakfast, just for the view it affords of the water and mountains. Visitors got the same routine.

I mention all this only because a few moments ago there were gray whales spouting out there. They're usually -- as they were today -- far enough away that you don't get a great view: spouts, sometimes a bit of a back. Once, though, one came right to the bank and stayed for a while, blast-breathing right in front of the house. Orca pods, half dozen or more in a group, go by once in a while. Whale sightings aren't real common from right here, so it's a treat when it happens. Nothing much to do with surgery, really, other than that it's in the obverse that I now have time to observe.

[I guess I should add that as of a year or so ago, there's now a huge industrial pier in front of our house, the pile-driving for which intruded on our peace and rattled our house for many months, and on top of which there was just added an enormous crane that wheels out and back to the warning sound of a siren. When at the end of the dock it looms red-eyed (two big lights) into our view. So nothing's perfect. But really, I still can't complain.]
Posted by Sid Schwab at 1:56 PM

Richard J. Rodriguez has also been posting about Whales off Whidbey and
More
Whale News at his Bitter End blog. I am glad you got to seem them. One of the highlights of my life was visiting the calving grounds at Laguna San Ignacio on the Pacific coast of Baja California and haveing an up close encounter with a young whale.

I'm right there with you, Dr. Schwab! I can almost hear, see and smell the fauna and flora, and the sea spray is misting my eyes - or are those tears? Thanks so much for sharing this!

@ Ross: Thanks for the links. Dave Neiwert at Orcinus also writes about the magnificent mammals and politics with a similar view as Dr. Schwab's vista.

ross: thanks for that! Funny thing is, in the twenty five years we've lived here, I just found out about the regularity of the viewing off Whidbey, around the corner from our view. We plan to take a ferry ride and drive to Langley, where we've been often but never to look at whales, and never at peak season...

Where's Milton when you need him? Paradise Found. It was there all along.

I was a resident - on call Thursday, flew out Friday on the red-eye, drove up to the area after arriving on Saturday (he didn't tell me there were high BRIDGES to get there - I'm extremely phobic about bridges!), watched the wedding Sunday afternoon, flew back Sunday night on the redeye to start call on Monday morning. I don't remember much about that weekend, except the bridges. ;)

Later, we took our kids to the area for a family vacation. My kids loved it.

er's mom: I just went back and linked the words "Deception Pass" to a picture, including the bridge. My wife doesn't much like crossing that bridge, either.

So nice to read this. My family's from Whidbey Island. My grandpa managed the Game Farm there until it moved down to Centralia. I just made it to the island for the first time last summer, saw the house my dad was born in, family plots, my granddad's name carved in the wet cement sidewalk in 1942. And the gray whale skeleton hanging from the Coupeville wharf warehouse. Like the rest of my family, I grew up on the Sound, too. Can't wait to get back up there.

You're living the dream, Dr. Schwab!

I love Puget Sound. When I was in undergrad, I did a five-week marine biology field course on Whidbey island. I loved it, from walking down to Fort Casey, and taking the ferry over to Port Townsend (great ice cream), to tidepooling around the region, it was a wonderful course. Thanks for the memories!

I've been reading your blog for ages (love it), but I had no idea we were almost neighbors -- I live on Whidbey. I don't particularly care to cross that bridge either!

OH...Dr SCHWAB! What a BEAUTIFUL view! I LOVED this post! You are so very blessed to witness and be surrounded by these things.

I would love to see whales, seals and bald eagles. Shoot...I'd be thrilled with the view!

About 5 years ago, my friend's son loves the pacific nw and left a high paying job with AT&T to move out there. He was single and so had the freedom to do it. However after living out there for a little over a year he had to return back east because he couldn't get work. He said either he was over qualified or they hired locally. he would have stayed out there permanently if it had worked out.

I know what you mean by constantly changing view. We live in a valley and have a view of the mountains across the fields. it changes by season (fall and winter my favorite) and you can see the weather moving in, fog, rain, snow and sometimes you can't even see the mountains. I also know why they sing "purple mountains majesty" in America The Beautiful. Of course...you would laugh at what we call mountains because they are ant hills compared to what magnificent mountains you have out there. Still since this Jersey girl grew up at the flat seashore... she is still wowed by these mountains. :)

Ha! If I ever went out west someone would probably have to remind me to close my dropped jaw because i would be in such awe of the beauty out your way.

Also...my beginning this comment with "OH..Dr SCHWAB!" is a compliment because some people in my life have pointed out to me that I always begin my compliment with "OH...(insert name)!" when I really admire something or someone.

Thanks for sharing this. I even called my husband over to see your view. :)

P.S. can you swim right from your property?

Have to walk a little trail to get down to sea level, and the water's pretty cold. We used to take a little rubber raft and catch crabs. Swimming is for the younger and more cold-tolerant.

WOW...you have an awesome piece of property!

well, the trail is not on our property and it's intermittently closed. And there's railroad tracks to cross...

When in Langley be sure to eat at the French bakery next to the grocery store. I rather like the town, been there several times on my sailboat. Despite the tiny marina there is always room for one more.

I'm getting queasy just thinking about that bridge. Thanks for the link!

Dr. Schwab,
I sent this post to my mom in Hillsboro, Oregon and she really thought it was beautiful!