Quick to the Cut 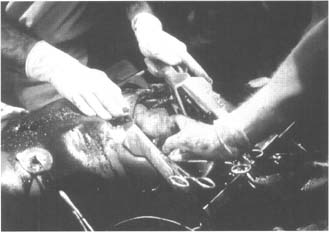 The following is from my book. It might lead to some posts on trauma issues. Meanwhile, it's a passage I like, and it's handy:

Real men open chests in the emergency room. Every surgical resident wants to do it; it’s exciting, dramatic, life-saving, and a little bit showy. We’d do it for any of several reasons, especially when there’s massive bleeding in the belly: getting a clamp on the aorta via the chest can slow the leak of blood into the abdomen, without getting into a mess before you’re in the operating room. Opening a belly in the emergency room for any reason—but especially for bleeding—would be disastrous. Because the belly wall compresses bleeding to some extent, pressure drops precipitously when you open and take away that compression, and you need all the resources of an OR to handle it. More exciting, chests also get cracked for heart massage. When the heart is empty from exsanguination, pushing on the chest from the outside does no good, so we’d open chests directly to squeeze the heart until we could get the tank filled back up with blood and IV fluids. The desire to do it could be hard to resist. I stood watching, on one occasion, as the team was tuning up a
victim of multiple gunshot wounds. He was semi-conscious, struggling and mumbling, fighting back reflexively at the efforts to help. Just after I turned away to call the OR and the attending, the patient hollered out in pain. Having heard the nurse announce the blood pressure had dropped to zero, the ER resident had started a slash in the chest.
“Holy shit!” I shouted as I turned back to the scene. “What are you doing?”
“Zero blood pressure. Gotta open the chest,” he said, getting pumped up for the glory.
“Jesus Christ, man, the guy is awake!”
Reaching across the gurney, I fended off the attack before the scapel made it all the way in, leaving the resident to his own thoughts as we took the victim upstairs. No pulse, no blood pressure— the combination was often a ticket into the chest. But, c’mon, not in someone still talking and moving around! After a routine save in the operating room, stopping some bleeding, closing some holes, the man recovered without a problem. A couple of days after the surgery I casually asked him what he recalled about his time in the ER. Nothing.


There’s a trick to emergency thoracotomy (opening the chest): ribs spread apart with difficulty, even in the OR. In an emergency, you cut between the ribs and toward the front, then turn the knife upward, making the shape of a hockey stick. To the side of the sternum, the ribs are all cartilage and cut easily. Slicing vertically through three or four cartilages makes an ugly scar, but it works: you can flip up the front of the chest like a trapdoor and get where you want to go. The most dramatic reason for thoracotomy in the ER, which we all wanted like a notch on a gun, is a stab wound to the heart (gunshots were rarely salvageable). It may not happen right away: a small stab allows blood to leak into the pericardium beat by beat, and as the pressure builds up it compresses the heart gradually (tamponade, as you’ve learned). Showing the typical sign of bulging neck veins as the blood backs up into the vena cava, the patient might fade away slowly. There could be time to get to the OR before opening the chest, maybe by sucking some blood out of the pericardium with a needle stuck in through the chest wall. With no time, you open in the ER.


If surgeons have a God-complex, this could be why: split open a chest, slice into the pericardium, stick your finger into a hole in the heart, and the patient may wake up with your hand buried in him half-way to the elbow. I did that once. The patient gave a thumbs-up to his friends as we wheeled him to the OR, the hole in his heart sucking on my finger like a hungry baby. At SFGH there were no cardiac surgeons, no pump techs. But it was self-selecting: a heart injury that might need bypass would have never made it to the OR. The ones that did could be fixed directly, by us. Holding the heart in your hand, compressing the hole with your thumb, enough also to dampen the beats as you place sutures on either side, timing your moves with the beating, aiming to avoid the coronary arteries—that’s pretty cool. (Could it be cooler than scooping stool out of an abdomen?) When you place sutures into the heart muscle, it fires off a string of crazed beats, trying to jump out of your hand, not knowing you’re there to help.
Posted by Sid Schwab at 8:15 PM

this is way too graphic, but totally amazing.

Enjoyed reading it in the book, and enjoyed rereading it here!

I've watched and written about a few cracked chests in the trauma bay, but I've yet to see anyone do it the way you described and mentioned in a comment to on of my earlier posts... All of our trauma surgeons still slice between two ribs, and crank open the spreaders..

Either way, its cool to watch!

I just discovered your blog and couldn't stop reading! Your comment about those speaking with authority (about various medical procedures as well as any subject) and not being correct hit the nail on the head for my recent experiences as a relatively new veterinarian. I've watched many vets (older and younger) do bizarre things in surgery and swear that it is protocol and when I simply ask why (so that I and my patients may benefit from some new trick....) they get all huffy. I will say that the mentors that I admire are those that question everything. Also it's somehow comforting to know that there is a human surgeon putting into writing a lot of the same thoughts I have every day during surgery! There is no substitute for experience in any field. There is a lot to be learned from your blog about life in general.... thanks for sharing your thoughts with the world. -Charlotte

And thank you for your kind words and for finding my blog.