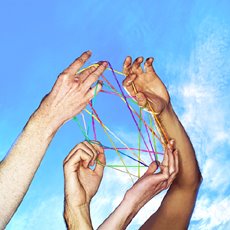 One of my more naked screw-ups during training occurred when I was Chief Resident, and in the blink of an eye (quite literally) it took me from feeling like God's gift to surgery to certainty that I was the village idiot. (Turns out that form of rapid decompression continues more or less weekly throughout the career of any busy surgeon. Nevertheless, this was as deflating as hearing "That all you got?" from Scarlett Johansson.)

I'd seen a man in the clinic who'd had several operations for fistula-in-ano, recurring within a short time on every occasion. Brilliant surgeon that I was, I considered the possibility that he was one of the less common victims, having a connection from skin to colon, well above the anal area from which fistulas most commonly arise. So I ordered a barium enema. Sure enough, I got a call from the radiologist telling me there was a fistula between skin and sigmoid colon. Hot damn! Not only could I demonstrate my acumen to my attending, I'd be doing a very cool case: sigmoid colectomy was then and remains now one of my favorite operations. Got the man all worked up and prepped and a few days later, there I was in the OR, making a nice little lower midline incision. Figuring on finding some inflammatory process in the colon, I expected a possibly tough operation, but I felt up to it. So I was surprised to see that the man's colon was soft and pink and normal as the day he was born. No fistula, no how. Ooops.

My attending, having confidence in me, had had me start the case unattended, so I called him into the room to convey the news. "Where are the XRays?" he asked. Well, er, for some reason they weren't in the OR. "Did you look at them yourself?" he asked, voice a little tighter and higher than with the first question. Like a goddamn idiot, for no reason that would ever hold water, I hadn't. I'd been so excited to hear the confirmation of my brilliant diagnosis that I didn't bother to go down to the XRay department and have a look myself. The arrival of the films in the OR was met with steely silence by my attending, and horror by me, as even I could tell the so-called fistula was an artifact: spilled barium from the procedure, masquerading in at least one view as a tract from colon to skin. Idiot radiology resident had made the wrong call; idiot surgery resident hadn't gone to check it out.

Lesson: confer with the radiologist. Look at all your films yourself, most especially when the situation is unusual. Sit down side by side with the radiopod and go over the details. I can tell you I NEVER failed to do that again. (Incidentally, the man had a "horseshoe fistula," which had never been properly unroofed and cleaned out. My attending took over: propped the man's legs up and back and carved away most of the skin of the man's hindmost, until his sorry little anus looked like a tiny island in the seas of Hades. I was numb-struck at the carnage, but damned if it didn't eventually completely heal, and fixed the problem. (It was, however, I'd say in retrospect, a bit more than the poor man needed; maybe my attending was too pissed at me to slow down.)

Which brings me to the point of the post: as I've said previously, the best outcomes occur when docs work collaboratively. And that implies, among other things, that the people involved 1) know what they're doing, 2) like the idea of collaboration, and 3) can do it in a collegial fashion. For example, when I ordered a radiology study (except in the most routine and simple of situations), I talked to the radiologist in advance, explained exactly what I was looking for, solicited suggestions if another study might be better and, when the study was done I got together with the radiopod and went over it with him/her. Love and kisses, right? Well, not always. It was not rare that, despite my ministrations, the study didn't get done when scheduled, the wrong study was done, and the doc to whom I'd spoken neither ended up being the one to do the study nor took the time to pass the info to the one who was. And despite having made clear my concerns and the levels of urgency, I'd not get a call when the study was done. Or I couldn't find the radiologist who did the study, or even the available one, to sit down with. Not to mention being able to find the films.

That last little frustration, thankfully, is becoming rarer, as nearly all studies can be and are digitized into a server right when done. So as long as the names and numbers have been inputted correctly, they're instantly available. But the others, well, nothing's perfect. And between my occasional less-than-charitable attitude over such missteps, and some radiologists' less-than-delighted willingness to drop what they're doing to sit down with me, sometimes the atmosphere was a bit sullen. Nevertheless, the fact remains: that sort of working together is the ideal. Especially when it actually works.

Then there's this: sort of like actual humans, doctors vary in their level of skill and commitment. I think that's a huge part of the variation in costs and outcomes among doctors, and it's something about which it's hard to see what the solutions might be -- or even if there are solutions. You've got your great mechanics, honest and reliable plumbers; artists of varying talent; lawyers who get OJ off, and lawyers that wouldn't have. It's just the way it is. But with doctors -- and especially those in high acuity fields -- the impact of variation is enormous. I think the example of interactions between surgeons and radiologists, pathologists, anesthesiologists is a microcosm which provides some insights, and I plan to say more about it.

[Addendum: several months after posting this, I received an email from a person rightly upset about something I wrote, namely: "It was, however, I'd say in retrospect, a bit more than the poor man needed; maybe my attending was too pissed at me to slow down." He was outraged not only that I'd screwed up but that an attending might have, in anger, over-done the extent of the operation. Looking back, I think I was saying that nowadays one might have been able to do less extensive debridement, and I sort of threw in the "anger" proposition, because I still feel bad when I think of it, and of how angry he was at me. Anyhow, the fact is the man got what he needed from my attending and healed completely, and permanently. And although it in no way justifies it, I learned a valuable lesson than stuck with me and helped me provide better care for my patients throughout my career. I don't blame the reader for being ticked off.]
Posted by Sid Schwab at 4:33 PM

As a radiologist,I appreciate it when the surgeon (or anyone else) wants to go over a case......you understand what is needed and it prevents mistakes.

And yes, I have seen some of my fellow Radiologists act like SOB's to other physicians. It always pissess me off......

It really is beautiful when everyone works together. It makes me proud to do the job I do.

i am getting so much insite into this doc, and again, beautifully written............bee

Awww Sid. This was a thoughtful one.

Heh. Here in Cambridge the part of the dissection manual has in big bold letters "ALWAYS LOOK AT THE X-RAYS YOURSELF". And of course, anyone who knows me will tell you that I have a fantastic memory and can easily memorise dissection manuals, particularly when they're spelled out in big bold letters. So it was one day when the Big Bad Dissection Dude interrupted us hacking through the abdomen and asked us, "What's the first thing you do when the radiologist tells you there's a problem with the X-ray?"

Funnily enough, after berating us for not memorising that line and suggesting that we buy dissection manuals in Braille next time, we had trouble getting through some fascia and he had to do it for us. Like your attending, he was not happy. That corpse was pretty much done when he was through :)

The lessons we learn.

no offense to radiopods because it isn't their fault (mostly), but in today's day and age, it would seem that a surgeon (or whoever ordered the study) would have to see it for him/herself because of the ubiquitous "can not rule out," "possible fistula," CYA language, even in the impressions, would force the final call not to lie the radiologist.

Again, nothing against radiologists. I might even be one some day because I love any form of imaging, but from what little I've seen of the handcuffs they walk around with, procedurally (limited to whatever the work order says in spite of better judgment) and legally, it's not at the top of the list. Awesome toys, though.

As for the ground rump roast left on the poor patient, your attending was probably giving you a sample of what would be done to you should it happen again. "...except this guy, Schwab, has the benefit of anesthesia..."