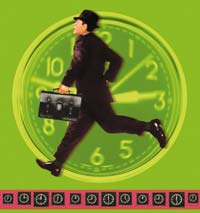 My aunt tells me this: (I have no recollection, but it makes some sense, considering.) My dad, she says, was taking me and my brother to a baseball game one day, when I must have been around five. Excited at the prospect, I ran up the street to tell my friend, instead of heading to the car; engine likely already running. My dad was many good things, but patience was not an attribute. As he drove off without me, I ran after them, crying; then stopped and stood there, crushed.

I really hate being late.

Throughout my career, the only schedule more sacrosanct than my office was that of the operating room. I was close to insane about it. For reasons I could never understand, some surgeons are never on time, routinely showing up at least a half-hour after their scheduled start time. It is, in my opinion, the height of rudeness: start your case list late, and the effect dominoes through the day and into the night, screwing up the plans of patients, OR personnel, other surgeons. I know: things happen. Even I arrived tardy once in a great while. But I know from 25 years' experience: on time can be done. Most often, I arrived in the OR at least a half-hour before my scheduled time. I never wanted to be the cause of a late start -- and late starts drove me crazy.

Making it worse, I always felt that a start time is a cut time: at 7 a.m. I expected to drop the knife, not see the patient rolling down the hall on a gurney. In fact, most ORs came not only to expect and appreciate it, there were a few that loved to see if we could get the first bandage on by the scheduled start time (especially likely if the first case were a pediatric hernia.) And when I had several cases lined up, I'd help move the patient on and off the table, get stuff for the nurses, help set up equipment. As a result, I got great turnover times (the time between cases): the whole crew would get into it. Which made me feel good, because if I delayed the surgeon scheduled after me, I felt like a criminal. It almost never happened, whether I had one case on the list, or six. Besides, I had patients to see in the office, and it's even worse to make yourSELF late!

Which brings up another point: when I told the OR scheduler that a case would take twenty minutes, or an hour, or three, I meant it. Orthopedic hours, as far as I can tell, have somewhere between 90 and 120 minutes in them. Plaster, I guess, affects the space-time continuum. Once again: things happen. A twenty-minute appendectomy can take a couple of hours; the belly can hold surprises. But I know it's possible to be pretty predictable, because I was.

I took call at least every third day/night, often more. My practice was no less busy than anyone else's. Yet I managed to run my office like a damn train schedule (the non-Amtrak kind, of the days of yore). My nurse would schedule a patient at 10:05, and tell her "That means ten oh five!" Got lots of incredulous compliments. Both of us did.

There are no mysteries here. I don't have any special secrets other than to be thoughtful when scheduling, and to be fanatical to the point of insanity. It's a good thing for everyone, with the possible exception of oneself. 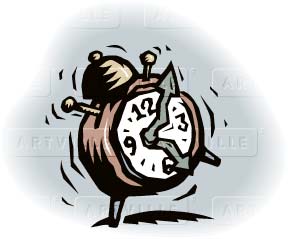 Personal accountability, a most refresing approach! I am a retired Hospital Administrator who can remember the days when most, if not all of the surgeons respected the sanctity (and real value) of starting on time. Alas, too many of todays surgeons feel that only their time has value.

Totally lost on these physicians is the fact that the support staff begin to count on a late start, so anesthesia has more time to work on the crossword, talk to their stockbroker or chat up the new single and very good looking nurse!
So in the event that Dr. Always Late does show up on time; guess what-nothing is ready!!! So... the tirade begins about "how this hospital doesn't care about the surgeons who support it".

The reality of the OR is, the surgeon sets the tone for the surgical team. If things aren't going as the surgeon wishes, it is always a good idea to look in the mirror before assigning blame. You wanted to be the captain so act like one.

This would drive me nuts! I hate to be late as well. At least you're blogging while you're waiting - that helps pass some time.

I have been pondering what inspires a good post...its often small occasions whne we have time to think, or in your case, slowly smolder as each minute passes.

My nursing school employs the three strike rule to everything, including puntuality. If youre late three times (1 min or more to clinical) you fail the course and have to re-apply to the program.

If only medical professionals could self-govern themselves in such a manner.

I was personally motivated to be on time or habitually early due to my upbringing. My father was always late. I once observed my mother crying because we were late to her brother’s wedding and were holding up my uncle who was our ride. It truly impacted on how I view the punctual and non-punctual. I’ve often found those who are late rude, insensitive of others, and lazy or unorganized. Currently I’m in my Gen Surg rotation and love it. However, what I find agonizing is waiting – on labs, anesthesia, the operation before us to get over, etc. I will try and read, practice my suturing and knot tying, or check on patients, but I constantly come back to “the board” to see if my patient is “in holding” or “in room”. I can’t relax knowing we should have already begun.

On another note: I have added your blog onto my sidebar as I’ve enjoyed your writings for some time. I look forward to more poignant and thought provoking posts.

I've been practicing my subcuticular stitch! However, I can't seem to get the stitch started, lol, and always have to have the Resident start it for me.

A particular instructor who plagued me for several years had the following bylaw: "Order and punctuality."

Punctuality stayed with me ...

Too bad beepers don't have a shock function.

fyi: added you to the blogroll

We have a different problem in my hospital. I'm fanatically on time as you are. The OR staff is not, especially as the day wears on, and turnover times get longer. The reason? I get paid by the case, they get paid by the hour. All too often, the OR crew gets paid more than me, as they get paid whether the patient has insurance or not. A percentage of mine are "freebies." 3 more years to retirement.

Hit another one out of the ballpark again Dr. Schwab!

Punctuality I can control in my office, and I am also a fanatic about it. Patients appreciate it, the staff appreciate it. A patient once asked how it was that my office seemed always to run on time and other doctors' did not. I replied, "That's easy. Those other doctors don't value your time the way they do their own."

These days, I'm wondering if those same doctors don't fundamentally suffer from a lack of self-respect about the value of their own time.

Cograts on getting the OR to move at your pace. At times it can seem like trying to jog through molasses.

Now that's rich from Medstudentgod, blaming others for delays. Your education is far from complete; would you consider practicing a few months of anesthesia while still in med school so that you have some clue what goes into good care on the other side of the drape?

Consider for a moment that med students are nothing but a time sink. Everything about your participation with the delivery of health care costs time; the patient has to give you a second history and physical, your interns and residents have to go through your presentation, your attending has to listen to you also and provide teaching at your level on rounds. When you perform any procedure the patient give literally of themself and you take extra time to do it. We participate in medical education because it is a value to us to pay forward the benefits of education that others undertook to teach us.

Do you really think that delays you attribute to anesthesia physicians are without any merit? We too have lives and families outside the hospital; delays merely prevent our completion of the work day in a timely manner. Delays reduce overall billables. Did you ever hear an anesthesiologist complain of delays while you closed a wound at the end of a surgery taking substantially longer than an experienced surgeon? Probably not.

Get a grip med student. If you have a god complex now imagine how insufferable you will be as you move up the hierachy.