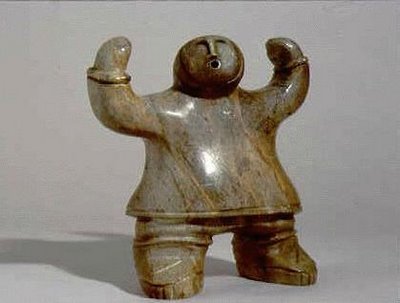 I'd have to say he was a typical grandfather: grey, bald, with the usual crescent of remaining hair. His skin was, perhaps, a little more vibrant than you'd expect, and he had a pleasant peachy sweetness of face that I didn't attend to in any particular way. I was more concerned with his groin, in which there resided the typical tender mass of an incarcerated inguinal hernia. It had been that way for several hours, and he was feeling nauseous and quite uncomfortable. He had earned a round-trip ticket to the operating room, on the express route. His family was there with him: wife, couple of kids, grandchild or two. Nice guy.

In the simplest of terms, a hernia means there's a hole somewhere with something poking through it. Those holes, for the most part, are ones that we're born with but which, for some reason, have become enlarged, allowing protrusion though it of something that doesn't belong in the hole. By far the most common of the "natural" (my word) hernias (herniae, if you grok Latin) are those in the groin. There, a bunch of holes exist, in locations subject to gravity, or the pressure of straining. But whereas those factors (straining, lifting, etc) may have a role in the timing of the development of a hernia, I think that to get one, you also have to have had some imperfection in the development of the area. Here, in words, is how I liked to demonstrate, in action, the development of the most common form of inguinal hernia. Put a kleenex (which is what I used) in the palm of your hand, and turn your palm down. The hand represents the muscles of the abdominal wall; the kleenex is the shiny saran-wrap inner layer of those muscles called the peritoneum (come to think of it, why not just use saran wrap? I didn't have any in my office.) Now make an "OK" circle with your thumb and index finger. Use the index finger of the other hand to push the kleenex up through the "OK" hole you made. That's the testicle (in the male) or the round ligament of the uterus (in the female) traveling out of the abdomen, through the abdominal wall and toward the scrotum (in the male) or the pubic bone (in the female.)

That's what happens before birth: in each sex there's a sac of peritoneum protruding though a hole in the abdominal wall, in the groin. A hernia, in other words, is always present before birth. That protruding sac in most cases withers away before or shortly after birth. But not always; in which case, the remnant can be the genesis of a future hernia. Its presence keeps the muscles from cinching up properly around the spermatic cord (in the male: the blood vessels to and from the testicle, and the vas deferens) or the round ligament of the uterus (in the female.) So you have a wider than normal hole with a bit of a sac protruding through. Presto, change-o! With time, something inside starts sticking out.

Whether a hernia needs fixing or not depends on various things: sometimes it's a bit of a bulge but causes no discomfort. No urgency; but the odds are it'll get bigger with time. Sometimes as the herniating organ (in the groin, usually intestine) pops in and out, it hurts. Fix it, at some point in the near future. And on occasion (much in the minority, in terms of reasons for fixing) the intestine gets stuck in the "out" position. When stuck, it may start to swell, get tighter, swell more, get tighter still, and eventually begin to cut off blood supply. A stuck hernia is referred to as "incarcerated." When the stuck stuff starts to die, that's what we call "strangulated." That's serious, and an emergency.

(For the record, in my opinion the choices for hernia management are live with it or fix it. A "truss" simply doesn't work. It's nearly impossible to get one to fit in such a way as to keep the hernia "in" at all times. So don't bother.)

Meanwhile, while I've been gabbing away, my nice old guy is heading to the OR, and by now he's asleep. My attention is directed to the slightly red lump in his right groin. I can't resist giving it a slight nudge: if it can't be (gently!) returned to its normal size after he's asleep, it makes more likely the finding of dead whatever in there. In his case, there isn't much of a change. So I forge ahead. For the most part it's simply routine: a loop of small intestine caught in the act, swollen, a little hemorrhagic, but clearly alive and well. I return it to the abdomen whence it came, and set about getting rid of the sac, getting it out of the way in order to close the hernia-hole back down snugly around the spermatic cord. Having opened the sac to inspect the bowel and slip it back in, it's necessary to remove the protruding part and the suture the remnant before turning it inward. But what the heck? Usually it's the simplest part of the whole operation. Something, however, is in the way, stuck to the side of the sac. There are several maneuvers to deal with such a thing: depending on the size of the sac, the most common organ to be involved with the sac wall is the urinary bladder. But this is... what the heck is it? I bend down for a closer look, feel it, look at it again. Son of a bitch! Wait a damn minute! No way!! Is it really what I think it is?? If so, it's definitely one for the blogs! In fact, I think I'll give you a little time to guess. It's not like I haven't given a hint....
Posted by Sid Schwab at 7:14 AM

I have no clue..But, if forced to give one, I would say an ovary. maybe that peachy face was coming from estrogen?

I'm with Dr. Dino and Cathy on this one ... some sort of partially formed female organ ...

My guess is appendix.

my guess was uterus too! ... proximity to the urinary bladder etc.

Appendix, been there, done that. But always interesting. Female organs would be a real Zebra.pipds