It Can Be a Gas 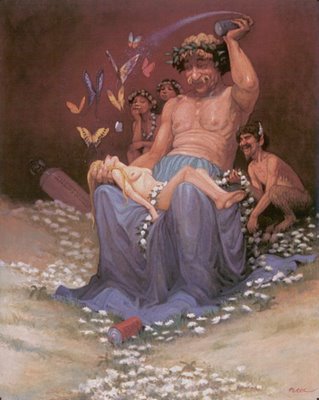 While assisting on a carotid endarterectomy (wherein the main artery to the brain is clamped off, opened up, and reamed out) one time during my surgical training, I noticed the anesthesiologist was rummaging around a bit more than usual: opening drawers, drawing up drugs, checking monitors. Finally he casually looked over the ether screen and said to the surgeon, "Jack, you might want to stop what you're doing for a while and push on the man's chest."

Shortly after I'd arrived in town, the new guy on the block, I told the anesthesiologist assigned to my impending breast biopsy in a frail elderly woman that I'd be happy to inject a bunch of local anesthetic if he thought it would simplify his anesthetic. "I don't need some pipsqueak punk telling me how to do my job," he yelled.

In the middle of a big case during which the patient's heart had become erratic, the nurse anesthetist seemed a bit flustered. "Think you should call Dr X (the nurses always worked under the direct supervision of an MD anesthesiologist) to come in," I asked? "He's out on his boat," she replied.

Debbie the Nurse gives the anesthesia quite frequently for the obesity surgery operations in which I participate of late. Those patients, being quite large and often having associated medical problems, present some unique intra-operative management issues, especially since most are scheduled to go home the same day. More than any of the other anesthetists, nurseoid or doctoroid, Debbie the Nurse can be counted on to have the patient awake and devoid of a breathing tube as the case finishes up.

The patient is asleep, prepped, draped; the equipment is all ready; it's time to begin. I always ask the anesthesiologist, "OK to start?" before I make the cut, and when the reply is affirmative, I dig in. Sometimes the patient responds a bit, moving. Occasionally it's a pretty vigorous move. I hate it when that happens. (Note: I've never had a patient remember it or comment upon it.)

During a major abdominal operation, open or laparoscopic, it's imperative that the patient is given muscle relaxants so the belly wall is nice and floppy; otherwise work is nearly impossible. Sometimes it's obvious they are tightening up: I say to the anesthesiologist, "He's getting tight." "I'm on it," is the response, usually. Better: with some docs, it never ever happens. Worse: "No way. Monitor says he's fully relaxed," comes the voice from above the patient's head. "Check the goddamn battery on your nerve stimulator, doc. He's tight as a drum."

Tough case. Big operation, sick man. Septic, needing ventilatory support, on blood pressure drugs. I'm not sure what I'm going to find, or whether I can pull him through. The anesthesiologist says, "Right. Let's get in a few lines; I'll pop in an internal jug after you're started. Piece of cake." And he sets about his business, gets the man off to sleep without the bottom dropping out, keeps his tank full, making it smooth. What a huge comfort that is. The guy's a genius at what he does. The only tension is on my side of the screen, and it melts away as things progress. The man's gonna make it. I can breathe easier, even ask the anesthesiologist how his kid's doing in school. At the end I -- as usual with the guy -- thank him for a great job.

"The blood looks really dark," I say. "Everything OK up there, Ralph?...Ralph?" I look over the screen. Ralph isn't there. "Where the fuck is Ralph," I ask. "Tell him to get his ass back in here." That's what did it. That's when the rest of the docs in my clinic agreed with us surgeons that it was time to hire our own anesthesia team. Which we did. They're a phenomenal group who, unlike the other group when they were the only game in town, make a continuing effort to remain excellent. (The other group soon did, too. Ralph ain't with them anymore.)

I'm struggling to see. It's late at night, there's a limited crew, no one extra to scrub in for a few minutes to hold a retractor. "Give it to me," John says. I position the handle of the retractor so he can grab it, layered behind the sterile drape; John gives a good yank and holds it while I finish my suturing, eyeing his monitors, doing the rest of his job at the same time. John spent a couple of years in surgical residency before he got wise and became an anesthesiologist. Nothing ever fazes him. He's sweet as can be to the patients ahead of time, gets scared kiddies to eat out of his hand; he's the one the others call when they can't get the tube in. Everything he does, he makes look easy. I love having him do my cases. Except that he's so handsome and ripped, the nurses are overtly gaga over him and sometimes I have to remind them to pay attention to me. He did my anesthetic when I broke my ankle; my son's when he tore his ACL. We named our new surgery center after him when he died of melanoma, leaving a wife and two young kids. He'd come to me for the biopsy that gave the bad news.

In response to my post requesting suggestions, Enrico asked about the relationship between surgeons and anesthesiologists. It's a good subject. I'm working on it.
Posted by Sid Schwab at 2:05 PM

I hope this doesn't sound too ill informed, but what is the purpose of the screen that's put up in between the surgeon and the anesthesiologist? (Is it so they can't see what the other one is doing?)

"Jack, you might want to stop what you're doing for a while and push on the man's chest."

Clearly, this anaesthesiologist will not need to take his own pulse first when running a code.

One of the things I like about surgeons -- aside from "cold steel cures" -- is the black humour. I believe that you and your esteemed colleagues have developed it into a form of art.

Anonymous: the screen (still referred to as the "ether screen" is a barrier between the sterile field of the operating table and the unsterile area the anesthesiologist works in. Occasionally it's used like a net on a tennis court: some surgeons like to toss things up there, knowing the anesthesiologist can't return serve.

Nice post, Dr. Schwab! Your book was great--if you've got a bit of HTML you can shoot to me, I'll put an ad for it on my blog.

The screen functions like the fence between Tim and Wilson on "Home Improvement". The surgeon occasionally will ask some profound existential question, like "John, is the patient deep enough?" to which the gas man will peek over the curtain, with only his eyes visible, one oh-so-expressive eyebrow jauntily cocked, and cryptically reply, "Bob, the train of four's zero, zero, zero, and the BIS is 23." The surgeon will nod sagely and returns confidently to his work, his fear (well okay, fear's not in the surgeon's vocabulary), uncertainty (alright, alright--even when a surgeon's wrong, he is confidently and passionately wrong), and doubt (okay, lots of this--surgeons love doubting things) swiftly and completely swept away. Just like Home Improvement, see?

Dex: having that sort of code-savvy is beyond me. Wish I had some. I do have a jpg of the cover. Meanwhile, I visited your blog and it's very return-worthy. And yes, when the stars align properly, the dialog between surgeon and anesthesiologist achieves a karmic plane, known only to the holy few.

Dr. Schwab, I wanted to tell you, I just finished reading your book..It was awesome! I am learning so much about what you guys have all went through. everyone should read this book.

I am having my bookstore get me 2 more of them as Christmas presents!

cathy: very glad to hear it! Thanks.

the screen is sometimes called the blood brain barrier, haha. all in good humour.

Enjoyed this format and the topic. I also enjoyed the artwork for the post-very fitting.

that was really enjoyable! i do appreciate this look into your world. even tho i'm only a lowly little appointment setter in a clinic (altho i love my job), i have always loved the world of medicine and care. perhaps it's because my mother was an xray tech for 35 yrs, and it feels like home.

I enjoyed reading your post. You have good insight into human nature and a great sense of humor.

So I planted the seed and am late to the party...sorry! Damn medical school eats up so much of my time -- how inconsiderate of it, right?

Thanks for addressing my suggestion so quickly! I'm flattered you found it worthy of discussion. I especially loved the vignette style of post that I haven't seen here much before--I think it's really effective for such a multifaceted topic with so many different personalities and situations.

"Monitor says he's fully relaxed," -- what a tool! Correct me if I'm wrong but SM relaxants (pol&nondepol) can have a regional/directional progression, so while the monitor on the forehead may read A-OK, that doesn't mean their various abdominal muscles, for example, are loosey goosey.

The surgeon I spent a lot of time with was a board-certified anesthesiologist before switching careers, so most gas passers knew not to screw around with him because he'd literally give three options to correct the situation at hand if they didn't do it fast enough, all while not breaking stride with the Bovie. On the other hand, he knew when a case needed special handling from them, and having been there, gave due space/time when it was warranted.

Too often it seems like surgeon/anesthesiologist is like a dysfunctional marriage--too often ugly, great on occasion, but for better or worse, it keeps going for the sake of the patient (or kids, in my analogy).

I look forward to more (as always)!

enrico: even in the belly, it's not the smooth muscle we're concerned about: it's the muscles of the abdominal wall. So the little twitchometer is in fact a reflection. But some rely on it above all with no admission that for various reasons it might not be telling the whole story.

As a former surgical assistant, I loved this post! We almost always used nurse anesthetists and, while I would have expected them to have slightly less ego than their MD counterparts, it was woefully untrue. When you find some good ones, though, you've gotta stick with them. Nothing ruins a smooth surgery more quickly than a bad anesthesia!

I am a RN who used to do trauma and then from there transferred to the PACU. I love the stories about the surgeons and the anesthesiologist. So very true!

"I don't need some pipsqueak punk telling me how to do my job," he yelled.

pipsqueak! Was he really huge? I wouldn't call someone 6'-4" tall a pipsqueak. Even if I did it would be "Sir Pipsqueak".