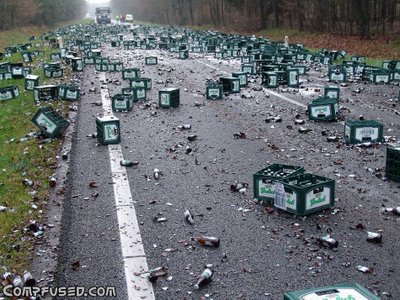 One of my mentors (in my book, I referred to him as Ken Rockford, and described him as a "goddamn grenade") used to go crazy if anyone said "Oops" in the OR. It was a ticket to the exit door, quite unceremoniously. Indeed, it makes sense: "oops" is not exactly the thing an awake patient would want to hear from the other side of the ether screen, knowing people were taking liberties with his various parts. But, when you think about it, the term is as common as an itch: saying it, in most cases, is no more conscious or important than scratching your head. The word is quite loosely tossed around, at the least of opportunities.

I was thinking about it as, for the millionth time, I let an "oops" pass my lips this morning in the OR. The occasion: placing a simple stitch in the skin, closing the small stab incision I described a couple of posts ago. One end of the suture slipped through my fingers as I tied it, leading to exactly zero problem, and taking an extra two seconds as I picked it up and finished the knot. But "Ken Rockford's" voice shouted in my head as loud as if he'd been in the room. The patient was asleep; no harm, no foul.

Hernia repair -- about which I plan to put up a few posts in the near future -- is an operation I liked to do under local anesthesia; in fact, in training we used to make a big show of having our patients get up off the OR table and walk to the recovery room. And of course, I did lots of minor office procedures, and some less-than-minor things (breast biopsies in particular) in my office, on people who had reason to be nervous. Yet I never was able entirely to rid myself of the ooperative. Moreover, I tended to gab away at or with my awake patients; joking, telling them what I was doing, talking baseball, kids. So the sudden interjection of an oops tended to be a show-stopper. "What was that, doc? What's going on?"

In truth, I can't think of a time I actually got a question like that, because -- unable as I was to expunge the expression from my lexicon -- I was sensitive to it the minute it passed my lips, and I always managed to follow it with "sorry, sponge on the floor," or whatever truthful explanation there was. And then I'd often tell the patient about Dr. Rockford. Most people never seemed at all bothered. On the occasion when something of significance had happened, I'd likely say "oh, look at that. Got a little bleeding here, so I'm going to shut up while I fix it." Evidently, it would be said with enough calm that there'd be no headward panic. No emptying of bladder or bowels.

Given that in most ORs the default situation is a sleeping patient, it's not a rarity for someone to pop in and start talking, occasionally about things better left unsaid at that moment. I'm quite good at pantomiming "The patient is awake," even with a mask on. If anyone writes a book with that title, and I get it in a game of charades, I'm gonna kick butt.

I'm told -- I'd prefer to think it's a suburban legend -- that somewhere, sometime, some patient brought suit against his surgeon because during a procedure he heard the surgeon say "Oops." Convinced that it meant something bad had happened, he sued -- either for pain and suffering from the fright, or because there must have been a coverup. It's a good story. I think of that, right after the image of Ken Rockford tossing me out of the room way back then, whenever the word slips out. I wish I'd get over it.
Posted by Sid Schwab at 7:00 AM

I say oops alot. usually it's while I'm reading the grammatical errors in my own blog!

Looking forward to what you have to say about hernia repair!

Dr. Schwab, I linked you today...I hope I did you justice.

found you through cathy. hilarious! well the "goddamn grenade". is that a beer spill in your picture?!

I do remember when I went in for my tonsilectomy (if that's the actual term) that I heard the surgeon or ENT coming in say, "Okay, let's get this kid done, I want to get lunch," right as I was passing out. Apparently I came to in recovery trying to get the hell away from him. The nurses had to hold me down until I passed out again.

I probably could have dealt with "oops," though.

You're right. "OOOPS!" would be the last thing I'd want to hear in the operating room. That and..."Where did I put that again?" HAHA! c",)

Enjoying your blog. Keep at it!

Here are a few other things patients don't want to hear from the table:

* Better save that. We'll need it for the autopsy.
* Someone call the janitor - we're going to need a mop
* Accept this sacrifice, O Great Lord of Darkness
* Bo! Bo! Comeback with that! Bad Dog!
* Wait a minute, if this is his spleen, then what's that?
* Hand me that...uh...that uh.....thingie
* Oh no! I just lost my Rolex.
* Oops! Hey, has anyone ever survived 500ml of this stuff before?
* Damn, there go the lights again...
* Ya know, there's big money in kidneys. Hell, the guy's got two of 'em.
* Everybody stand back! I lost my contact lens!
* Could you stop that thing from beating; it's throwing my concentration off
* What's this doing here?
* I hate it when they're missing stuff in here.
* That's cool! Now can you make his leg twitch?!
* I wish I hadn't forgotten my glasses.
* Well folks, this will be an experiment for all of us.
* Sterile, schmerile. The floor's clean, right?
* What do you mean he wasn't in for a sex change...!
* Anyone see where I left that scalpel?
* OK, now take a picture from this angle. This is truly a freak of nature.
* This patient has already had some kids, am I correct?
* Nurse, did this patient sign the organ donation card?
* Don't worry. I think it is sharp enough.
* What do you mean "You want a divorce"?!?
* She's gonna blow! Everyone take cover!!!
* FIRE! FIRE! Everyone get out!
* Damn! Page 47 of the manual is missing!

You were nice enough to explain health insurance to me, I thought I would repay the favor and do a little legal research for you. It is not a suburban legend. There is a 1980 Michigan case where the surgeon was sued after saying "oops, I cut in the wrong place". It was during surgical repair of a double inguinal hernia. Not a very good area for an "oops". The cite is Orozco v. Henry Ford Hospital, 290 N.W.2d 363. I am going to try to link it, but considering I had problems just typing this comment, it's not likely I will be successful. My apologies if this comment shows up twice.

Damn. I forgot to say it. Regarding the above post: This is not legal advice. I am not your attorney. You have not retained me or my firm (even if you don't who I am or the name of the firm I work for). The last thing I need is the State Bar and your $800/hr. brother on my ass.

Reminds me of the Chicago Hope episode when the female cardiologist commented on her patients' lack of endowment below the waist while he was paralyzed but awake. He awoke to sue her and the hospital for a hefty amount. "oops"

Actually, there is a website designed to support victims of anesthesia awareness (awake during surgery)anesthesiawareness.com

"But that's how they did it on Grey's Anatomy last night!"

Hi ,
I have added your blog link in my Weblog .
would you please add my link too.

I waiting to see your comment in my weblog .