Arthur Of The Missing Stomach 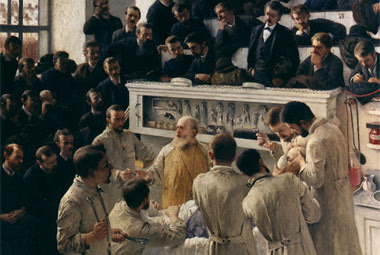 Speaking of gastrectomy, as I was in the previous post, there's another patient I'd like you to know about. But first, a word regarding gastric surgery in general: it's fun. Unfortunately, it's much less common nowadays, because those doggone scientists have come up with excellent drugs to prevent and/or treat ulcers, which used to be by far the biggest reason for operating on stomachs. Too bad for me, good for you.

Anyhow, there are several things that make stomach surgery fun, uncommonness being high on the list. Also, richly endowed with blood supply, the stomach tends to heal well, no matter what you do to it. And, depending on how much stomach is removed, there are lots of ways to put things back together, each with its own nuance and technical challenges. Plus, you get to say the very cool surgical name, Billroth, when talking about a couple of those reconnections.

Christian Albert Theodor Billroth was one of the inventors of abdominal surgery. Born in the 1820s, he was working with a clean slate: everything he tried was the first time it had been done. My mind can hardly encompass what that must have been like, and not only in terms of technique. He had at his disposal the most minimal of anesthesia, few (and often home-made) tools, no IV fluids, no antibiotics. Not to mention an uncovered voluminous beard. It's amazing. And whereas it's true that (as my mentor said) the patient, ultimately, takes all the risk, still men such as he had a kind of bravery that I find astounding; not to mention provocative of envy.

After removing a portion of stomach it's necessary, of course, to reattach the remnant to the intestine. Among the choices shown in the above link, the amount of stomach remaining has much to do with selecting: the ideal is the Billroth 1, 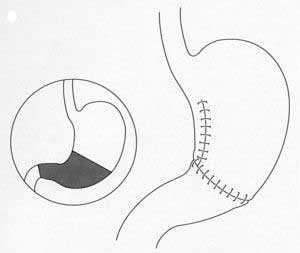 because it is the most "natural," if you will. (I know I will.) But hooking to the duodenum is limited by the fact that it (the duodenum) is fairly-well fixed in place; so if the gastric remnant can't be pulled down there easily, you have to close off the duodenal stump and bring the closest bit of small intestine up to the stomach. That's a Billroth 2 operation: 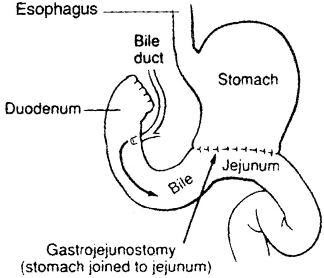 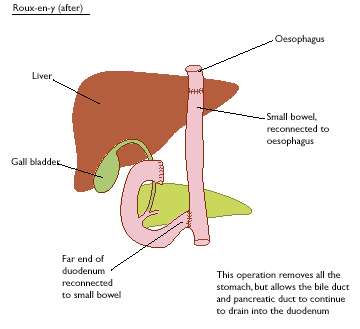 I get a kick out of that stuff. In fact, it's better than the illustration above: if you do it as shown, there's no reservoir for food. I like to bend the intestine around in the shape of a "P" and sew the top of the P to the esophagus. The loop of the P (which involves an extra suture-line to connect the bottom of the loop to the vertical part) makes a nice holding tank, and allows people, more often than not, to eat quite satisfactorily. That's what I proposed to do for Arthur, and it totally freaked out his wife.

Already slight and small, Arthur had been diagnosed with stomach cancer, in a location that demanded total gastrectomy. He was a "whatever-you-say-Doc" sort of guy, but his wife was literally beside herself. Vibrating in such a way as to appear to be two people must be how the "beside herself" expression came to be. That's what she was doing. "How can he live like that? He'll starve to death!! Look at him!! How can I feed him? What can he eat? I can't cook like that. What'll I do? What'll I do?"

It's certainly reasonable to be shocked at the idea of an absent stomach, but she was letting my words bounce off without sticking: I was telling her I thought he'd be able to eat whatever he wanted, maybe in smaller portions. There was no special diet. No instructions. He should eat whatever sounds good to him, and we can see how it all works out. Boing, boing, my words came back un-received. She was as refractory to input as a crashed hard-drive. But there wasn't much choice; and as our meetings continued, I managed -- calling upon my greatest communication skills -- to lower the vibratory amplitude. Calm, such as it was, prevailed.

The operation went fine, despite finding that the tumor had grown directly into the left lobe of the liver, requiring that I take the whole stomach and a pie-slice of liver as well. Arthur made an uneventful recovery and was ready for discharge in a few days. I stopped by his room for a final goodbye, to find his wife -- who'd relaxed a bit until then -- wide-eyed and pale-faced, vibrating anew as a dietician instructed her on a "gastrectomy diet." WTF?? Who requested that consult?

Delicately as possible, I invited the dietician to join me in the hall, where I explained that this was exactly what the woman did NOT need; I'd take care of the dietary management myself. Had anyone requested the visit? No, she said. She'd just noted that the man had had a gastrectomy, and had taken it upon herself -- per some protocol or other -- to make the connection. I explained the peculiarity of the situation, to which she smiled nicely, and returned to the room and took up where she'd left off, as Mrs. Arthur levitated to the ceiling.

It may not be a surprise to regular readers here that this event sat uncomfortably with me. Suffice it to say there were communications. It's my opinion that there are lots of very useful services provided by many professionals attached to a hospital. And they should be used. When invited.

Well, I managed figuratively to hose Mrs down. And how did Arthur do with his extensive cancer and large treatment? Two answers: first, about ten years later I took his gallbladder out. Second: around a year after the gastrectomy, my wife and I were eating at a local steak joint. Couple of tables away was Arthur, chowing down on a nice New York strip and a baked potato, as his wife, calm and cool, did likewise. They had dessert, too.

I had surgery where they used some of my stomach to add length to my esophagus and create a new LES. Gastroplasty/fundoplication. I was mortified initially, at what my eating habits (or lack of) would be for awhile. But, my Doc. was pretty much like you. Liquids only for 2 months and then gradually try things and see how I did with them.

These things sound worse when we are told about them, than what they actually are.

Your stories are very interesting! Thank you!

It's interesting how often "whatever-you-say-Doc" sort of people are married to overanxious micromanagers. Yin and Yang, I suppose.

I've decided surgeons are artists, combining the skill required to remove "essential" organs, and re-create the equivalents with the creativity of a sculptor.

btw-I had no idea 19th century surgeons fashioned some or most of their instruments...very interesting.

We Head & Neck surgeons have these kind of run-ins with the speech pathologists vis a vis "Swallowing Evaluations" and eating instructions after major resections of the upper aero-digestive tract. Nice, well meaning ladies who add little if anything to the patient's care.

There must be some hidden "Protocols of the Elders of Medicare" stashed away in the hospital administrator's vault which mandate these "consults" after certain kinds of surgery. Too bad they never share this information with us lowly surgeons.

I know exactly what you mean about those other professional services! I once had a patient who was an elderly gentleman with paranoid schizophrenia. Actually, this is too long to tell in a comment. I'll post it on my site.

Anyway, I can just see this woman shaking and wringing her hands in despair--enough for two people for sure!

Every patient has to come to his or her own terms with any life changes caused by surgery. Advice from all those helpful folks may help provide a starting point, but that's about it.

Sadly, what should be advice often appears in the form of edicts and mandates. Some patents quickly realize that, say, someone who has never had a stoma, let alone one in the exact place and hooked up in the exact way as yours, is not in a position to provide definitive guidance as to how to take care of it. But others...

The few times I've had any exposure to medicine beyond my GP, I've always been astounded at how many people come in to look at me. My hypothesis that hospital personnel wander around until they find someone to talk to just got a data point in its favor.

Heh. My uncle is a professor at a good sized medical school. I'll have to ask him about that.

"It's my opinion that there are lots of very useful services provided by many professionals attached to a hospital. And they should be used. When invited."

Mine too. As a nurse, I prefer to take care of your patients the WAY YOU want them cared for. But no. Hospitals have to have thousands of protocols. Theater of the absurd too, to the point that new nurses don't have a clue what to do without a protocol.

Thanks, Tom. Some breathtaking photos at your site, I must say!