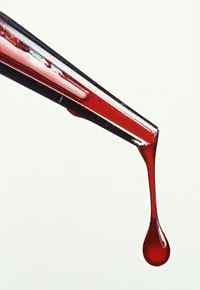 I'm certain that if I hadn't been just finishing a midnight appendectomy, Daphne would have died. Not fully balancing all the bad luck in her life, she fortuitously chose to exsanguinate when a surgeon and OR staff were immediately available. Nevertheless, vomiting all that blood, she damn near died before she got to the hospital.

Niceties like passing a scope to find the source go out the window when someone is bleeding to death from her stomach. When I'd gotten the call, I was writing orders for the previous patient. I let the OR know they'd be getting someone in a big hurry, flew down the stairs to the ER, and met Daphne, who wasn't in a position to be sociable. In shock, confused, continuing to vomit blood, she was also very obese and showed obvious signs of Cushing's syndrome: side effects of high dose steroids. Whatever I might find and do, healing would be severely limited by those drugs. And you can't stop them for surgery: it would cause general collapse. Daphne's husband had ridden along in the ambulance. Compared to her, he was a tiny wisp of a guy, looking appropriately worried. I told him -- no surprise -- that she needed immediate surgery, and we'd see what we'd find, and do what we could. It was a very critical situation, I said. Blood had been drawn for cross-match, and I ordered a bunch of O-negative blood, started a couple of big IVs, told the OR we were on our way, talked to the anesthesiologist, and drove the gurney myself, pointed the way to the waiting area for her husband.

One thing about operating on the hypercritically ill: when you start from zero, there's no downside: clearly, she's going to die unless I can do something. No decision there; and, at some level, no pressure, in a perverse sort of way. Which is not to say I'm cavalier about it: I know that I'm the only hope she has. But unless I make a horrible judgment, or a monster technical error, a bad outcome is the default situation: I can't make it worse. I think.

In the middle of the belly wall, the rectus muscles (the six-pack muscles, in the fine and fit) are separated by a fibrous band, called the linea alba, or "white line." It's pretty bloodless, and what you aim for in making a midline vertical incision. Off to either side, it can get bloody. But in the very fat, it can be hard to find rapidly. There's a trick, for those of you trying this at home: after cutting through the skin, if you and your assistant pull the edges away from each other, hard, the fat splits apart like the Red Sea (the yellow Red Sea), right down to the white line, fast and smack on. Then you can split the linea sharply, fastly, and get in there.

What you'd expect, based on the odds, is a bleeding duodenal ulcer, the surgical approach to which is generally quick and easy: make an incision through the pylorus, place a couple of well-aimed sutures, and it's all over but the closing. Cut a couple of vagus nerves for good measure (it reduces acid secretion). But Daphne was anything but routine: she had two enormous ulcers, huge, encompassing much of the middle of her stomach, front and back; one of which had eroded through the wall of the stomach and into the splenic artery. No wonder she was bleeding so massively: that's a really big one, and I'd never seen it be the source of gastric hemorrhage. Having eventually made a large incision in the front of the stomach, the next thing I did -- once I realized the source -- was to put my finger in the hole in the artery to stanch the flow and give the anesthesia team a chance to catch up on volume replacement. That took a few minutes, during which there was nothing for me to do but stand there, a warm-blooded cork. Several pints of blood and bags of saline later, I placed sutures on either side of my finger, and warily pulled it out of the hole. Dryness, welcome dryness. (A professor of mine once said, "You don't need to worry about bleeding, Doc, unless you can hear it." Ha ha. This bleeding, I actually had heard and it's scary as hell. A hiss, a jet, a roar, hauling life with it, like a raft in a river.)

Even when it's necessary, operating on someone in shock is not a good thing: it unavoidably adds to the trauma, even as it seeks to reverse it. The least you can do is the best you can do. Get in, get out. But Daphne was in a hell of a fix: these ulcers of hers took up over half her stomach; plus, I'd probably just killed her spleen. I actually tried to save some of her stomach, not wanting to do a total gastrectomy for myriad reasons, but it was clear the remnant wouldn't survive. So, despite everything that would be ideal in a dire emergency, I removed her entire stomach and her spleen, and fashioned a sort of stomach-substitute reservoir out of intestine, and stapled it to the end of her esophagus. Too much surgery, really, for such a sick and medically depleted lady.

In a book I could tell you about if you were interested, I mentioned the generally competitive and uncooperative relationship between surgeons and medical docs in training. In practice, happily, it's the opposite. I worked with a sensational group of intensive care specialists, and between the two of us we pulled a few people out of the fires over the years. Daphne was one. In fact, I picked up her chart in the ICU one day to see a note from her primary doc -- pretty much out of the picture at this point -- saying, "I stand in awe of the excellent care being rendered to my patient by Drs Schwab and OConnor." Never saw anything like that at San Francisco General Hospital.

Despite my having told the family to expect, at best, a long and complicated stay in intensive care, Daphne actually recovered on a semi-straight path. (Secret to caring for surgical patients on high-dose steroids: lower the dose as much as possible, give supplemental oxygen, intravenous multi-vitamins and extra vitamin C.) Her life was tough: she lived in a half-hovel, to which I made many house-calls over the years. Her kids -- whom she'd named after cartoon characters -- struggled in school; her husband rarely worked. Unlike most patients with a total gastrectomy, she had a hard time nutritionally (other than a need for injected vitamin B12 on a monthly basis, many actually eat fairly normally and do well.) It had, in part, to do with the mysterious disease for which she'd been put on steroids in the first place: she sort of wasted away over the next several years. But every Christmas I got a card from her, thanking me for another year of life she'd not have had, had we not met. Once in a while she'd call with some concern or another and, since it was hard for her to get around, I'd go see her and do what I could.

Several years later, she underwent a total cystectomy for a chronic bladder infection: an ill-advisedly (in my opinion) big semi-elective operation for a woman in her shape, and once again she damn near died. This time, it was from MRSA. Not directly involved, but feeling responsible, I visited her in the ICU and painted a pretty grim picture to her family. Yeah yeah, they seemed to say. Heard it all before. She'll be fine. And darned if she didn't make it, again. She had healing problems this time around, and I became the default home-health aide, debriding her wound for months at her sorry little home. I guess I didn't want those Christmas cards to stop. They did, eventually, but not for a few more years.
Posted by Sid Schwab at 7:57 PM

Sid, thanks for your kind words about critical care docs. I are one ;-)

We may not be as glamorous as surgeons, but we got your back.

i can see why she was so memorable. poor lady! its just good to know you gave her so much more than she might have otherwise had.

i agree, you'll miss christmas cards from patients like that.
thanks for sharing this story.

This isn't entirely relevant to the post, but I have no other means of telling you so: thanks for this blog! I'm only a humble high school student, but this is one of many things that continually reassures me that I'm not a complete idiot for subjecting myself to a future premed course. Your stories and insight are fascinating and thought-provoking, as well as informative. Thanks again!

Controlled audible haemorrhage always gives me a slight euphoric buzz. I loved vascular surgery. I'm in awe of the aorta and iliacs.

The uncontrolled audible haemorrhage, on the other hand, not so much euphoria. But I suspect you can't have one without the other. And I think the "at this stage I can't make things worse" approach is a very important one.

And I love the way that traction points the surgeon towards the linea alba.

The more I read your blog, the greater appreciation I gain for my physicians. You provide insights that patients aren't always aware of. I never knew if it was appropriate to send xmas cards to my favorite doc, but after reading this, I'll definitely continue. In fact, I'm writing him a thank you note now, since I'll soon celebrate my 2 yr MI anniversary, and I'm still here to talk about it.

How nice of you to do house calls! I understand about those X-mas cards. There are very few things (in professional life) that are more heart-warming. When I left my patients due to graduating residency, I got lots of cards, so many of them it made me get tears in my eyes (and I am a master of the poker face).

She was lucky to have you, Dr. Schwab! Great post!

I'm getting a lot of exposure (in a good way) to our area's Children Services department, and sadly, I've met a couple of Daphnes. Your story is so bittersweet.