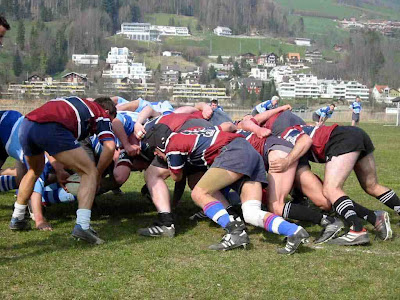 On first meeting over the years, many patients have asked me if I played football. I'm sort of a big guy and, during some cycles of my life, have actually looked in reasonable shape. The answer would be in the affirmative, with the qualifier that in general I was comparatively lousy at it. Slow. Not particularly agile; hypo-endowed with the killer instinct. (I was captain of the high school team, and was honorable mention all-city, on a team that finished dead last and never won a game. At halftime of my final game an assistant coach finally got to me: the Knute Rockne rah-rah never worked, but this guy managed to shame me. You coulda been a leader, you dogged it, etc etc, such that I got a little steamed had a noteworthy second half, made a few tackles, a sack or two, blocked a punt; so the opposing coach gave me a nod at voting time.)

Probably it was my first game that did me in. I knew literally nothing about football before high school. My dad, unrealistically wanting bragging rights, convinced me to turn out for the freshman team, and to sign on as a fullback. I didn't know that position from the missionary position, which I also didn't know. Within a day or so, after observing me trying to execute a cutback, the coach said, uh, I think you need to be a lineman. We practiced, I learned, vaguely, what I was supposed to do, and we had a game. Before play began, the guy across from me said "I'm gonna kill you, mutherfukker" after which, when the ball was snapped, he popped me one in the face, resulting in a bloody nose and a revelation. Returning to the huddle as the quarterback called the next play I said, "Hey, I have a bloody nose..." He continued the play-calling. "Excuse me, I have a bloody nose. I need to lie down." With derisive disbelief, the quarterback looked and said, "You BABY!" It was then that I realized in football, you play hurt. Your mommy doesn't give you a cold wash rag and say nice things while gently squeezing your nose.

I kept playing for the next four years, mostly screwing around with my buddies, not too worried about the score. We shared an attitude.

In college, at the end of freshman year, during which I mostly rode the bench, I discovered rugby and never played football again. Our team was actually good; we were East Coast champions, beating much larger schools, Ivy League heavyweights, and I got inspired enough actually to get in shape, run a few miles a day, pump a little iron. Despite the fact that the team was run by a rival fraternity I made my way to the A team by dint of making myself better than the favorite (and frat-brother) of the leadership.

In five years of football and four of rugby, I was never seriously hurt until I returned to my college during the first year of med school. My former team was playing a traditional rival in rugby, and that team was a man short; I was pressed into action, playing for the enemy against my old mates. In a desperation tackle I lunged at a halfback, caught his collar and hung on, somehow managing to detach the tendon of the flexor digitorum profunda of my right ring finger. The required surgery was just before a pathology final. Operating my old-fashion microscope, with its clunky machinery, right hand in an above-elbow cast, was a challenge. And the professor was unamused when I hollered out half-way through the practicum, "Would someone like to come over here and twist my knobs?" It did, however, lead to a romance with a classmate that lasted a couple of years...

[I have realized I've told part of this before. Which means it's confirmed: I've officially run out of things to say. Sorry.]

Nowt to apologise for. I have to admit that I haven't read through your entire archive so I won't notice the occasional recap.

Surgeon, When my oldest son was in high school (he is now grown with his own son graduating this year) I remember going to his first practice and almost decking his coach. If my husband and my father had not been with me, I'm sure I would have hit this man. I had never heard anyone talk so abusive to my child before.

I was ready to pull him out of sports. Of course, my husband and my father laughed at me, and told me this is exactly how it is when you play football. My son was very small to be playing football. Only about 5ft 7 in. and 130 pounds. but he could sure get that ball and out run everyone in town with it. Later, he took up karate and boxing. he just retired his boxing career last year after almost getting his spleen ruptured. I never once went to one of his boxing matches. I just dont have it in me to sit and watch my son hit people nor be hit himself.

I still don't compleely understand the need for these coaches to be so mean to these kids?

I think that picture at the foot is an example of Brownian motion...

[I have realized I've told part of this before. Which means it's confirmed: I've officially run out of things to say. Sorry.]

Dr Sid, just keep telling us stories. We don't care if we've heard them before. :)

Glad to hear you got your knobs twisted! ;-)

Sid, I have such a poor memory that you could tell the same story every other post and just change the title, I probably wouldn't catch it. keep on writing.

I spent the first part of my life terrified of getting hurt.

Once in college I somehow ended up in co-ed Rugby. I was late signing up for phys ed and it was the only thing open. I am a girl.

The first game I got smashed in the face, knocked out, lose teeth, with a big black eye. As soon as I came to they put me back in the game.

It was a wonderful revelation. It wasn't bad at all. The game was so exciting, it didn't really hurt. I took up full contact boxing after that and have enjoyed sports ever since.

To me, that picture looks like gang goat wrestling. If you've ever done it, you'd know what I mean. ;^}

Thanks for the laugh and glad your digit injury didn't impede your surgerizing.

Dr. Schwab, I love all your stories and your book, too. Even if some parts of your posts are retold, you always add something new and interesting. I'm continually learning something from your writings. Please keep up your wonderful works; your blog is my favorite!

anonymous: of all my anonymous commenters, you are now my favorite!

I was wondering when you'd enlighten us with something new....I kept coming back to the sampler post.

A good writer can't really run out of things to say any more than a piano can run out of tunes that can be played on it, and you, Sid, are a natural-born gifted writer.

Alison: how nice of you. We have a baby grand at home, owned originally by my grandmother. The bench opens to hold sheet music. Since we had the whole thing refinished recently, the bench is empty. Which, more or less, is metaphor.

No, the piano bench is just waiting to be refilled.

So I assume when you mentioned a rival fraternity that you were in a fraternity as well. Is this true?

I was. Where I went to college, nearly everyone was in a fraternity. In fact, everyone who wanted in, got in. Housing depended on it. We all ate at the campus dining hall; no frat had dining facilities. It was different there from most campuses. Then, it was an all mens' school. Now it's co-ed, and the frats have morphed into living quarters with no affiliations. For the better, I'd say.

Oh, like heck it does....not everyone knows the stories! You forget...you have new followers too!

That is one way to learn the placement of tendons :-)

Sid, I'll reinforce what others have said:

We don't care if you repeat yourself. Just keep posting, and we'll keep reading.

So glad to see you back!