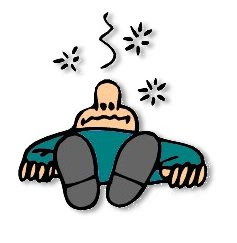 Summertime, during college, I worked on a construction crew. One job was in the woods, following behind a D-9 CAT as it pushed down trees, clearing a path for a sewer line (the job I then had building manholes killed the guy that took over for me when I returned to college. That's another story). I'd saw 'em up with a chainsaw, buck 'em up with an axe. Filling the wait time, I kept that double-bladed axe sharp as a scalpel, honing it with a broad file, the metallic hrrizzzzzz, hrrizzzzzz and the sway of my hardening shoulders convincing me I was Paul Bunyan. In one of my moments of brain-body disconnect (I also nearly produced a sagittal section of my head with the chainsaw, cutting a log lying across a gully, above me), I tried whittling with that axe, whizzing it past the fist that held my would-be chunk of wood sculpture. Gee, I thought. I could really hurt myself; and with that, I did it again, this time slicing into me just beyond the sino-thumbic M-P joint. It bled quite a lot.

After a few comical moments, wherein I grabbed my thumb and flagged down the CAT driver, who hopped off with a first aid kit and tried dabbing an iodine ampulet into the considerable flow, I found myself in the office of a nearby doc. "Lucky you didn't get the tendon," he said. And then, "Oh, it looks like you did..." As he readied his suturing materials, he suggested I lie down. "Naw, " I blustered. "I'm gonna go to med school. I've dissected frogs. This stuff doesn't bother me." So I watched as he injected some local and began sewing. It wasn't the blood, or the hurt. It was the sensation of feeling some sort of tug as the needle passed: I thought I could hear it or something. An awl through leather. Weird. About the time he looked at me and suggested again that I lie down, I said I thought I might go ahead and lie down...

I've seen a lot of people faint over the years. Since an episode during internship when a friend of a patient who'd insisted on watching as I sewed him up fell like a log, straight and unfettered, to a concrete head-lacerating floor, I've anticipated it. Still, it happens. Nearly always, on arousal, the fainter is embarrassed. Don't be, I'd tell them. It's natural. There are some situations when it's best to lie down, and when we fail to recognize them, or act, our brains are wired to see to it that we do. I always liked that explanation. I think it might even be true.

It's interesting. For some threats to our well-being, our adrenals squeeze like a fist and out comes the "fight or flight" response. Pumped up, ready to go. (Or is that "fired up...") For other situations, the better choice is "sit down and shut up." When you think about it, it makes sense. For a threat before which you remain more or less intact, a racing heart and fleet feet seem right. If, however, things take a turn such that your pipes are open with fluids leaking out, it might be wise to shut things down. So I think fainting is nature's way of telling you to cool it. If you're too dumb to get your brain at or below heart level, your head will make the move for you. And turn down the pump at no extra charge.

Well, nothing's perfect. Why we should keel over when someone else is in trouble escapes ready explanation, at least by me. Maybe it's slop-over, an individually exaggerated form of communally-needed empathy. You know you should help, you want to help, but shit-oh-dear: gotta take a pass! Of course, it might ensure that you'll have a second chance when you both wake up.
Posted by Sid Schwab at 6:00 AM

My partner, GPop, *loves* to tell the story about how I had to lie down when a nurse was explaining to me how to clean out GPop's mouth after wisdom teeth removal.

My husband does gets rather white/pasty looking whenever I have to sew up his cuts (twice now). He has always listened (to his credit) when I begin by telling him he has to lay down.

Last vaccination: had to lie down in my GP's office (well, second to last - I had an MMR booster in Bath because there'd been a breakout of mumps).

But I seem to have learnt to cope now - at least I've become a blooddonor without much trouble (well - I'm quarantined at the moment since I'm pumped up on SSRIs).

I can still imagine that I'd pass out and/or panic in an emergensy, though. Very irresponsible of me not to have learnt first-aid.

Another good reason not to do surgery on oneself (drat!).Imagine the embarrassment of passing out, scalpel or suture in hand, while in medias res.

Your pronunciation of syncope reminds me of an anecdote my pharm prof was fond of, about the characterization of epinephrine. It involved the lab sinks being at the right height for the (male) principal investigator to use...

As to epinephrine: I have the visual. Trying to work out the syntax.

i once blogged about this. http://other-things-amanzi.blogspot.com/2007/10/swoon.html

but syncope aside, recently one of my assistants developed acute pancreatitis while assisting me. how weird is that?

and one of my partners developed a bowel obstruction when i was assisting him. i suppose the assistant bears the blame, so you're off the hook. unless you'd driven him to drink with worry.

Picture a quite-short doctor doing a D&C: I had been having a late miscarriage and had been in labor 20 hours, and he'd decided, enough already.

Picture a 6'8" husband towering over the doc by his wife's side, trying to be helpful, holding her hand, turning progressively more white, swaying...

...and just as he's about to crumple, the nurse, on top of things while the doctor's attention was anywhere but up above himself, telling my hubby, Uh, sir. Go. Sit. Down. Over *there*!

alison: I made that directive many times; sometimes to nursing students or med students.

I think a short doctor is the perfect one to be doing a D and C. My dad, when I was in med school, for some reason suggested proctology. I told him I thought I was too tall.

i am a general surgeon from india. the concept of group practice is almost non-existent here. i would like to know whether you are/were in group practice or a solo surgeon? do you know of any such group practices? how to make it equitable and long lasting? can you provide some ideas?

indian surgeon: as I've written elsewhere in this blog, I was in a multi-specialty practice. There were 35 docs when I joined, over 200 when I left, close to 300 now. Equitable distribution of income among specialists, primary care types, surgeons, etc, is typically a problem in all such groups, and there are many models. Our group went through painful changes every few years. Basically, because surgeons bring in more money it seems there's always a disproportionate shift, with surgeons "giving" money to primary care by way of overhead costs. Some methods are less onerous than others. Not all groups can be happy all the time!

During my last C-section, the OBGYN asked my husband if he was alright. Knowing my husband-I am sure he was not but he got through it and I am sure more than happy to bolt out the door following our son. He gets squeamish around medicine and so does younger son.

I also have a friend who is at risk of passing out when they draw her blood.

My son in law grew up in a small town in another country and is quite familiar with slaughtering and butchering farm animals, but had to be told to sit on the floor (rather than hit his head as he passed out) while my daughter had a c-section.

I've always thought that men are more susceptable to this--especially the sight of their own blood. It seems the reaction can be delayed by five or even ten minutes sometimes. Cuts to the hands may be the worst. Does this sound likely to you? It's anecdotal.

BC: I think it's true -- in fact I think I wrote about it somewhere on this blog -- that men are more susceptible. In med school a male classmate fainted when we were merely discussing blood, in a classroom. No pictures, even! The prof said it's no big deal: men are like that. Women, he said, are used to blood on a regular basis.

As to hands: I've thought the same thing. There's something so personal and human about hands. I never got sick or passed out, but seeing mangled hands bothered me more than about any other form of trauma.

I used to be an EMT. I saw everything and nothing bothered me. I'm now a physician assistant, (new grad) and I'm older. During my OB and surgery rotations, I had to fight off the feeling of fainting. I don't understand why or what to do about it.

A hot feeling would overcome me and I had to look away in order not to pass out. No one thing seems to trigger it. When I was actually doing something, like retracting, or suturing or if someone was pimping me on questions, I did fine. I can watch surgeries and laproscopic surgery and interventional stuff doesn't bother me. I had no problems in the Cadaver lab.It seems like since

I'm now looking for a job. There's tons of surgical PA jobs out there, but I don't know if this is something that will go away with time or will I always have this problem? Once a trauma came in and I started to get that feeling too. Am I just more nervous now that I'm older?

What's wrong with me? I don't mind blood, I don't mind giving injections, suturing, I&D and minor stuff. I really want to get over this. Am I the only one who gets like this? None of my classmates have this problem. Any advice? Help!!

JAM: I wish I had something brilliant to say. Lots of people feel queasy when first seeing real surgery, and most get over it. That you had no problems as an EMT seems a good sign, and I'd assume that with time it'll be fine. If not, I guess you'll need to consider talking to someone about it.

Maybe being a surgical PA isn't such a great idea. I don't know who to talk to about it. I saw a therapist on campus who was clueless. I mentioned it to a few people and no one has anything to say. What am I supposed to do... Interview for a job and say, "Oh, BTW- I am a great PA, but I'm not sure if I'll faint while I'm assisting you-- but will you give me a try anyway? Maybe over time I'll get over it". No doc is gonna say, "sure, let's see what happens" LOL