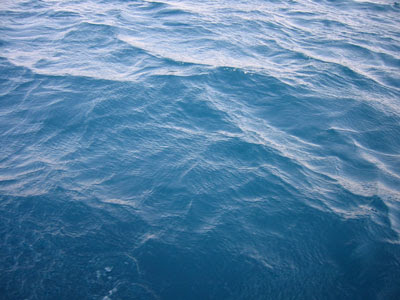 Inside a vein, it's always perfect. No matter the state of the rest of the body, when you open a vein and look inside it's smooth and shiny and slippery. The inner wall glistens and lavishes the eye with a creamy-khaki surface. Not that it's common to get into one on purpose: but for things as minor as a cut-down (directly opening a vein to insert a large IV), or as major as a portal-vein decompression (a finger-in-the-dike procedure to stave off the effects of cirrhosis), the lumen of a vein seems impervious to the ravages going on around it. It's like pushing through an old house stacked full of garbage, and finding a tiny closet, empty and clean, floor all waxed and sparkling. A private, preserved space, kept pristine for secret reasons. (Arteries, not so much.)

The bile duct is like that, too, if a little less certainly. When there's obstruction with infection, it can get red and thick, the inner surface knobbly and cobbled. Mostly, though, it's a similar wonder: clean and crisp and sparkling on the inside. There's something about these vessels and ducts that foster their own brand of amazement. Springy and soft, yet turgid and tough. Sewing a vein, unlike anything else, (as long as it's not during a mad rescue attempt) is almost meditative. It's quiet; maybe because the suture is finer, the instruments more delicate than with other kinds. And because it demands the perfection of needlepoint: even bites, close, careful and exact. There's rubbery resistance to the needle which gives way with a little recoil. There's no tissue quite like it. If creating, say, an arteriovenous fistula for dialysis, or if sewing a vein-patch onto an artery, you go through the vein first with the needle, and the textural difference is clear. Sometimes, you hold the slender suture between thumb and index finger of one hand, gently tugging upward to tent and approximate the edges, while suturing with the other. Very gently. The vein is more plastic, thinner, versatile. And, always, cleaner. When you release flow, the vein bulges, and holds.

Sometimes, it's the same with a bile duct: you might be closing a hole, sewing edge to edge. More often it's to make a connection between duct and bowel, and the two couldn't be more different. (Well, yes, they could. But if they were, you probably couldn't connect them at all.) Then, it's more of a puzzle: getting together two things of entirely different thickness and texture, one of gross and separating layers and another of imperceptible ones. It's a challenge and has its own rewards, but not the quiet kind that veins provide.

A vein, laid open but stilled of flow. A silky surface even when lying next to corporeal corruption. It's not a big thing, really; but seeing it time and again, is somehow reassuring. A signal that things might be made right. If one place in this person is still okay, maybe the rest can still get there.

Veins are our friends...arteries dare us to challenge them.

in elective surgery i agree, bruce. but in trauma, no thank you. give me an artery any day.

once again, sid, you amaze with your excellent descriptions. you make surgery what it is, fascinating, to those barred from first hand experience.

Great descriptions and another post for my Sid's Tomes file. If I'm not careful, you're going to start asking for royalties on the next book.

thanks, bongi. and i agree completely about trauma and veins. i almost said something about it in the post but it would have been sorta counterproductive.

i think i mentioned somewhere in one of my posts long ago about, as an intern, watching a man bleed to death from an injury to an iliac vein that tore and tore and tore on attempts to fix it.

I love watching what you guys do.

I have a secret wish to do three things in surgery: lyse adhesions, bovie bleeders, and make a subcuticular closure. All so cool and immediately gratificatying.

Thanks for some great reading.

terry: lysing adhesions is indeed an artform. As an intern, watching others do it (one old guy who was slow as hell) I thought it'd be the bane of a surgeon's existence. I'd like never to see them, but learning to do it cleanly and briskly, how to find the planes of separation, is one of those signposts that signals beginning to know what you're doing. Losing the fear.

Hey. Can't I wax poetic without writing a poem? And I know that site. I'm not that good, I freely admit it.

There is something entralling about suturing fine delicate tissue, observing good surgical hand from the sidelines has been my only experience, unless of course I have been practicing in a lab with a new brand of suture, particularly synthetic absorbable suture for instance.
As a rep, selling more than just suture, I have looked to try and encourage surgeons to use staples to anastomose vessels as well as the colon etc. What's been your experience, and have you ever used clips to anastomose vessels before?

During my sales rep training at a lab in France, my tutor, who incidentally hated using diathermy (electrocautery)for haemostasis, insisted we practice lysing the gallbladder off the liverbed with laparoscopic scissors and an endopeanut. Very gratifying to succeed, but painfully slow obviously.

If you've read elsewhere in this blog you may know how I feel about stapled bowel. I've used vessel staplers, particularly in the chest. It works well.

Sid, I'm humbled. I've been browsing your blog archives -- just one masterful essay after another! You have a true gift for evocative descriptions of your experiences.

I'll have to buy your book, I suppose. In the meantime, keep up the good work!

Larry: I love hearing such things, of course. Thanks!

Dr. Sid,
your last paragraph means a lot to us cardiac surgeons.

anonymous: indeed! I'm on my way to visit a friend who just had a six-banger: LIMA, a radial or two, couple of veins. Thanks for coming by.