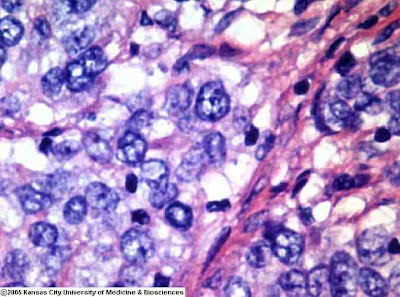 I've been asked it a lot: what does cancer look like? The questions don't usually refer to the microscopic view, of which the above is a good example: big and dark and variable size and shape of vacuolated nuclei, discohesive, not much cytoplasm. People want to know what I see when operating.

Our apprehension of beauty has much to do, I'd guess, with the expected physical attraction to our own form. Smooth and supple, graceful curves. (Is there anything more lovely than the female breast?) And if most people are repelled by the sight of viscera -- as well they might be, spilled in some tragedy -- the essence of that beauty is still there. Our innards have the same characteristics: glistening smooth surfaces, slippery, fine edges, gentle transitions. Those organs that are solid have a cushiony firmness: there's give, there's welcome. And their shades are of the earth: ruddy, fall colors, comfortable ones, like autumn leaves, sleepy and warm.

Cancer is many things, but it's none of those. Arising as it does in every different organ, it has varied forms. It's not one shape or size or color or even texture (although mostly it's hard as bleached bone); but without fail it's ugly. Ugly as hell. And I don't think it's just because of what it signifies, or because of the hollow hole it forms in the gut of the surgeon who sees it where s/he didn't expect it. It's because of what it does to that sculptural perfection. Cancer is Lazlo Toth to the Pieta.* It's warplanes to a rice paddy.** Like a gnarly claw, cancer grabs tender tissues and pulls them toward itself. It distorts and discolors; it pocks, it kinks, it bends and it cracks. As it insinuates inward and hauls back, it transforms the sensuous and the smooth and the curvaceous into the discontinuous, the asymmetrical, the knobby, the pustular, the sudden. When you see it, you know it; when you touch it, there's no mistaking.

In the liver, cancer is a pallid and spidery pucker. The normally purplish smooth surface is studded with gray and hard nodules which, when below ground, pull inward and form jagged depressions. When originating elsewhere, the liver lumps are round but imperfect, like a dirty snowball. In bowel, when advanced and at its worst, cancer glues itself to surrounding structures, dragging them in like a vortex: other loops of bowel, omentum, all tugged and knotted together radially, like arms reaching in desperation out of a whirlpool. Inside, on the inner surface, it rises like an eruption, up-heaved and rolled edges, cratered down in the center, stealing the red and making it into a mucoid leer. Sometimes, as it outgrows its blood supply, cancer putrefies in its core, conferring the sensation of rotten fruit. Usually, though, it's hard in a way that our tissues are not: there's no give, none of the fluid turgidity that feels like life.

Of course, it does have meaning beyond mere sensation, and that is part of the perception. It's not possible to recognize cancer without being impacted by its portent; and that most certainly confers much of its repulsiveness. To operate with intent to cure, and to find those unmistakable signs that it's gone beyond is to have sorrow become physical and palpable. There's no way to count the times I've examined a woman with a lump in her breast and known with near certainty within a second of laying on my hand. In that moment, for me anyway, it's not possible to pretend. I know what's inside: that spiculated gristle, gritty and hard, pus-colored. If there's time, we'll be okay. But it's still ugly as hell.

*An artistically blindered science major, I stopped in Rome on my way to a research summer in Yugoslavia, during medical school. A friend of my family -- a priest, later a bishop -- happened to be there, and took me on a personal tour of the Vatican. Seeing the Pieta was stunning, broadening. That a person could have wrought such beauty from a piece of rock... I detoured to Florence just to see more of Michelangelo's work. And it was not very long after I was there that Lazlo Toth -- whose name has stayed with me ever since -- wreaked his destruction.

Dr. Sid, very nice post. I really like
Cancer is Lazlo Toth to the Pieta.* It's warplanes to a rice paddy.** Like a gnarly claw, cancer grabs tender tissues and pulls them toward itself. It distorts and discolors; it pocks, it kinks, it bends and it cracks. As it insinuates inward and hauls back, it transforms the sensuous and the smooth and the curvaceous into the discontinuous, the asymmetrical, the knobby, the pustular, the sudden. When you see it, you know it; when you touch it, there's no mistaking.

But oddly enought that picture of the microscopic cancer would make a beautiful fabric print. I found that thought disconcerting as I read your post. But I would buy the fabric and make beautiful quilts of it.

Dr. Sid - can you recommend a site where we can see cancerous tissue, the view that a surgeon has when it is discovered?

You are quite articulate with your description. I always just sum it up as hideous looking. And it really is.

Anonymous: I don't know of one site. If you do an image search for various types, you can come up with pictures like this or this. What a surgeon sees depends on the stage at which it's found, which type, etc.

(Is there anything more lovely than the female breast?)


As if this really needed a response, but the short answer is "No" and the long answer is "Hell no."

Sorry, your little aside made me lose my concentration as I started reading. I'll go back and read the rest of the post. I'm sure it's good.

I've missed your writings. Hopefully, this break is temporary.

Come back. I need more of your blood and guts writings.