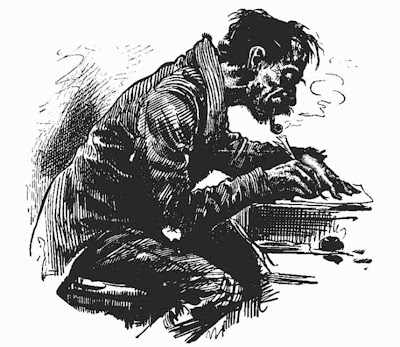 The best thing about having written a book is hearing from people who read it. At the top of that list is the friendship I've established with JB, who trained at the same place I did, UCSF, about ten years ahead of me. I'd never met him (still haven't, other than via many emails), but I'd heard stories: like Hawkeye Pierce, he got away with some memorable stuff there because he was a really good surgeon. He was also a surgeon in Vietnam, where he ran an Army trauma unit; and he's done a little writing. He's lived an extraordinary life; in the words of a mutual friend, he's "the real deal." I'm honored that he contacted me. And his feelings about the place where we became surgeons are a lot like mine.

Readers of my book will know that a central character is that classic county hospital, San Francisco General Hospital, and the trauma center within it, Mission Emergency Hospital. Maybe the source of the phrase "brick shithouse," the place was memorable in countless ways. First and foremost was the building itself. Decades old, made of brick adorned incongruously with a sort of Gothic roofline and containing unexpected marble floors and carved wood banisters, "The County" -- as we called it -- served most of the destitute of the City-by-the-Bay, and provided trauma care to everyone of all walks of life, housing them in open wards, providing the most modern of care in the most ancient of settings. Containing surgical amphitheaters from the days of surgeons operating in suits in front of an open audience, in more recent times, just preceding my arrival, it had also been the living set of famous movies. Becoming Chief Resident on the Trauma Service was the pinnacle of years of training: the top of a steep and tall pyramid, the most demanding, the most exciting, the most responsible job there was. Having looked with awe at those chiefs as a lowly intern, working slowly and exhaustingly toward the goal over many years, finally finding oneself in that role was magical. Unbelievable. Both daunting and exhilarating. And you lived in a cool place. Deservedly, since being Chief Trauma Resident meant staying in the hospital, instantly available round the clock for sixty days straight.

It wasn't much, really, by most standards. Off a dark hallway on the second floor of the hospital was a small bedroom just large enough for a single cot and a bedside table, outside of which was a larger room where the senior residents slept (the trauma service consisted of two teams which alternated twenty-four hour shifts -- plus time required for joint rounds and finishing of work; more like thirty-plus hours on and twelve-plus off -- each headed by a senior resident, with a single chief of both teams, who stayed put.) Big enough to house the occasional liver rounds, that outer room also contained a chair or two, a bookcase, and a display of various items that had been extracted, over the years, from the recti of many clients... Despite being sparse and bare-walled, it was a cool place, if for no other reasons than throughout the hospital only the Chief Resident of the Trauma Service had access to such a room; and that so many generations of surgeons had occupied it, including some pretty big names in American surgery. When I moved in, I was very aware of the river of history that flowed through that suite and was deeply humbled by it. A storied nook in a fabled place. And I was the last ever to occupy it.

For much of the time I was there, a new hospital was being built -- modern, sterile, with private rooms, narrow corridors with none of those great and gloried ghosts walking them. It was while I was Chief Resident that the work was finished, and the move to the new facility made. (I did the first operation in the new operating room, it having been very important to the Chief of Surgery that the trauma team do so.) All we had for sleeping in the new place was an unused patient room, devoid of all that history. And having vacated, they took the wrecking ball to the old brick house. It put up a good fight; took much longer than had been planned, so sturdily constructed it was. (As opposed to the new place, wherein holes were punched into walls by door-handles within days of opening.)

I wrote about the mysteries of the old County in my book, and of the sense of loss as I moved out. JB read it and, because he'd felt the same way about that place, he wrote to me. He told me stories of many of the characters in my book, and said how much he'd loved reading mine. And he said he had a gift for me, something he'd had for many years and with which he'd always felt there'd come a time when he'd know what to do. Unaware of its impending ignoble end a decade later, he occupied that Chief Resident room with a sense of devotion and awe like mine, and when he left, he'd kept a little piece of it, which lay for forty years in a dresser drawer. He read my book, he retrieved the memento, made for it a proper repository, and gave it to me. A most wonderful thing. It is this: 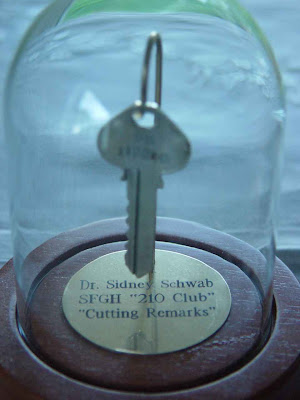 Thanks, JB.
[Update, 2012: turns out the key isn't what I thought. In fact, I have no idea what it's for. I remembered the chief resident room was room 320, lovingly called "The 320 Club." It's all poetically appropriate, since it's turned out JB wasn't who I thought he was, either; namely, a true friend. But that's a long and sorry story, not worth repeating yet another time.]
at November 26, 2007

How very nice for both of you!

Well, Sid Outed ME:
I am JB, also known as John Baldwin, a surgeon who now lives in Twain Harte, CA. I was fortunate to go through the SFGH/UnivCalifSF program when it was still "collegial", fun and relaxed. We kid surgeons opened bellys, shot by the Zebra and Zodiac killers all by ourselves, saved them and later called "the professor" to tell them how it went. For me, it was the highlight of my life, only surpassed by going to VietNam as a successor to Hawkeye Pierce... into a combat hospital where I did nearly 2,000 operations and stood on my own legs, with no professor to back me up. In one year, I saved more young people, than I did in the remaining 35 years of my career!
SFGH made real surgeons. Period. "Cutting Remarks" is a book which reads so fun that you go slow so as not to finish it in two days. Sid Schwab's peerless prose combines with his well-known surgical expertise to make him a real author, a real surgeon, but most importantly, a real man. I stand in awe of his work. John N. Baldwin, MD FACS. Cardiac/Thoracic/General Surgery UCSF 1961-1967

How great is that? I loved John's comment, that the book "is a book which reads so fun that you go slow so as not to finish it in two days."
That's how I feel about it. I am reading it now, and I can tell anyone reading this, it is so worth it! I'm glad I bought more copies to give as gifts for the holidays. I would have loved to see photos of the old building. Keep writing Sid, about anything.

You see. As I said it make a great story. I love it!

And, the key in it display is great visual. As well as the complimented comment of Dr. Baldwin.

I agree with his comment as well about you book.

How you must treasure this gift, Sid. And how wonderful that JB gave it to you. JB, you sound like a wonderful doc and a lovely human being...much like Sid.

Cool post. I wish I had trained about twenty years ago. Your place reminds me of the old Cook County Hospital in Chicago. Gray, hot, dingy, and occasionally frightening, but what a great place to learn how to be a doctor. I still miss that call room on the sixth floo,r aka the "Turkish Prison".

Beautiful story. (as is often the case here!)

Sid, is John the same guy as 'Joe' in your book?

No. Joe in the book is his real name, Joe Utley. As I said in this post, I'd never met John when he contacted me about the book. John also left a comment above.

Oh right, thanks! It was the general and cardiothoracic training that made me wonder!