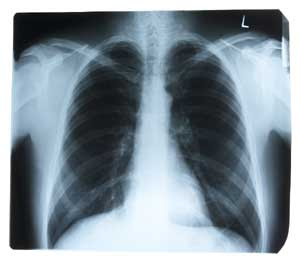 Speaking of physical diagnosis -- and I just was -- I'll never forget one guy at whose feet I sat as a med student on my pediatrics rotation. Double boarded in radiology and peds, he used to come up to Cleveland from Akron to hold forth on rounds, periodically. The ritual was that after he'd given a talk of some sort, the staff would pop up a few Xrays for his analysis. Cold.

On one occasion, we had a child admitted with acute glomerulonephritis, an inflammation of the kidneys, in kids typically due to strep and potentially very serious. What was shown to the doc was just a chest Xray. "Watch this," the peds resident said as she leaned over to me. "Bet he gets it." To me, it was an absolutely normal Xray.

"OK," he said. "Looks like a male, about eight years old.' [It was.] "The vascular markings are a little prominent [to me, they were perfectly normal], like early heart failure. The heart is slightly enlarged [in my eye, it wasn't] but the contour is normal, so it's not congenital heart disease. The most likely cause of failure in a child this age, absent primary heart disease, is glomerulonephritis."

Wow. I'm pretty sure he wasn't in on the diagnosis. I'm also certain as I can be he's among a tiny few who could have diagnosed kidney trouble from a near-normal chest Xray. Up to a point, I can relate, or at least understand how it's possible: not only was he a really brilliant and experienced physician, he had a certain context in which to proceed. I got good at reading mammograms and belly films. Better, I'd say, than radiologists because I knew more about what was going on.

I remain a complete incompetent when it comes to looking at ultrasound images, especially of the breast, and I admire those who can do it. It also makes me uncomfortable to have to rely so completely on someone else's interpretation, because I've found, to the regret of myself and my patient, that they're occasionally wrong about what's solid and what's a cyst. In looking at films, I always want to know what the radiologist has to say; but I reserve the final interpretation for myself. Can't really do that with ultrasound. I took a course, the point of which was to get surgeons to do their own ultrasound-guided breast biopsies. I decided I'd never have the time to get good enough at it.

Some people have special powers. Ernie the Pathologist could look at a slide of a few cells for a nanosecond and say "It's cancer." Pathology was one of my worst subjects in school. To me, everything looked like liver. I did carry my breast aspirate slides directly to Ernie, however, and we'd look at them together. Eventually he got me to the point where I'd have pretty much of a clue. Never enough to make my own calls. Not even close.
Posted by Sid Schwab at 11:55 AM

okay, so this is probably going to seem entirely random, but I wanted to ask you a question. I recently (as in 5 days ago) had a tonsillectomy and septoplasty performed. When I woke up, my father informed me that while in there, the doctor had decided to take out my Uvula. He had absolutely no consent from me to do so, and he had never even mentioned a swelling uvula as a complication from a tonsillectomy. There were a few sinus procedures that were listed on my consent form that he had me "okay" just in case he got in there and decided that my CT scan was lying to him (clearly not the phraseology he used with me).

I guess my question then, is: is this okay for him to do? To remove something from my body that we never discussed (let alone me giving him permission to do so!) I'm extremely upset over the whole ordeal, and I would have never given him permission to remove my uvula. I'm very upset about what happened to me and I really am not too excited to go for my check up tomorrow. From a surgeons prospective, is what he did legitimate?

kati: I'm sorry. My instinct is to answer, but I really don't want this blog to become such a forum. I'll say this: the fine print in operative permits typically includes language that gives permission to do things not specified but deemed necessary during the conduct of the operation. I'm sure your surgeon would be happy (or willing!) to explain exactly why he found it advisable to do what he did.

Thanks. I know the intent of you blog is not to have upset patients of other surgeons come to you. I really appreciate your reply.

thats neat. ive been reading you a few months now. i did not know you had an akron/cleveland connection (akron= my hometown ) :) .

When I was an intern at a community hospital in the early 1980's, a surgical professor from the medical school came to give a conference. One of the community surgeons asked to present a case to the visitor. It seemed that the community surgeon had embarrassed himself by performing a thoracotomy for a right lower lobe abnormality on a chest x-ray. When he opened the chest, there was nothing wrong! The community surgeon wanted to show everyone that even the famous professor would make the same mistake he had.

The professor looked at the chest x-ray for five seconds and said, "I hope you successfully drained this sub-diaphragmatic abscess!" The professor had made the correct diagnosis and the community surgeon had been embarrassed once again.

As a lay person I think it is next to impossible to read anything radiological. I can see the ribs. :)

I brought the ultrasound pic of our younger son to work with me one day after the test. I proudly pointed out his head and backside - showing nurses and doctors. Then a couple of days later I showed the radiologist and he politely pointed out that I had it backwards - that the head was the backside and backside the head. Then I went and explained my mistake to everyone.

I was just so enthusiastic that I just wanted to show everyone. Here I am showing the radiologist like he had never seen one before. :)

I am like this with aquariums. I can usually tell very quickly what a problem is without running any tests; I do usually run the tests to back me up--"Watch this, this chemical's going to turn your water bright yellow..."--but in cases where there isn't a test available, the solution I recommend is invariably spot-on.

I can't tell you how many grateful fishkeepers I've helped. It's nice to be an expert at something :)