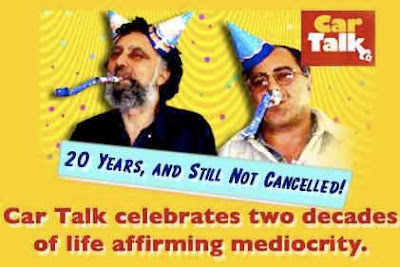 When our local NPR station has its (barely tolerable) fund-drive, one of the gifts you can choose is a license plate cover that says "I'm not laughing at you, I'm listening to Car Talk on KPLU." It's true: it's one of the rare shows on any medium that makes me laugh out loud. I've listened for years. So the other day, I have a little problem with this beater Bronco I have and it occurs to me....

Small fantasy fulfilled. Having gone to their website, dialed and redailed many times; having finally got a recorded message and left an account of the issue; having waited through a couple of weeks of silence, I recently got an email from a familiar (to listeners) name: Louie Cronin. "We're interested," is the gist. There followed a couple of phone-tag attempts at connection, and eventually we were talking. Louie, it turns out, is a girl. Mary-Lou, she said. I'd always assumed it was some cigar-chomper in a green eye shade. Come to think of it, I still can't say for sure...

Anyhow, she fills me in on how it works: they tape on Wednesdays, I'll need to be available from 7:30 AM till 10. Pas de problemmo. She'll call fifteen minutes ahead, give me some final instructions (don't read from notes, make it concise), put me on hold while I listen to the show, waiting for the familiar "Hello, you're on Car Talk." And a couple of weeks ago, it all happens.

I awake with a headache, probably unrelated. Coffee, cereal, ibuprofen, morning paper. The phone didn't ring until 8:15, and there was Louie, my pal. They'll be taking a break, she says, then give the answer to last week's Puzzler, then they'll be talking to Ronnie from California (I only know one Ronnie from California, and he's dead). When they sign off on her, I'm on. The connection, she says, isn't up to snuff. Same phone we were on before? Well, it's a portable phone. I do have a wired phone: old-timers do. She calls back on the other line and seems satisfied. On hold then, I stand up, sit down, unable to pace as much as I'd have liked. I hear Tom and Ray doing their shtick, and one of them blows a line. They keep talking, but re-do the line a couple of times. Then they're on break, making small talk which I can hear. Now I'm an insider. Cool. Then it's Ronnie, talking about her boyfriend and empty gas-tanks. The automotive kind. Finally, it's "Hello, you're on Car Talk."

My problem, it turns out, is pretty simple as far as they're concerned, but I thought it went well nonetheless. They were more interested in the name of my town. (OK, I may have fudged a little: we're exactly one hundred feet from the city limit, but we're in the school district of the town with the cooler name, and my wife has been on its school board for ten years. We almost never go downtown to the bigger city, hanging out mostly in the named one. So it's legit, right?) I don't think I sounded like a total idiot, but I may have said "Indian" instead of "Native American" when explaining the city name. And I'm a liberal!

Within ten minutes of the end of the show, I get an email from another producer, Doug Mayer -- also a familiar name. Good news and bad news, he says. The good is that it's unlikely I've permanently soiled my reputation; the bad news is not all conversations make it on the air. He links me to a thank-you photo. It feels like a form-letter email, so I'm not completely humiliated. On the other hand, do I tell my friends to listen, only to be absent from the show?

I just got an email from Louie. I'll be on tomorrow. Far as I'm concerned, I'm being bold in announcing it, because I'm still not sure I didn't sound like an idiot. 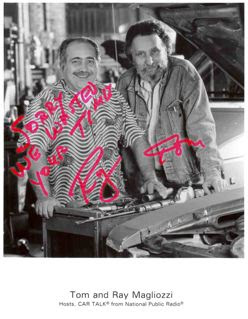 I will be listening. Damn, but those guys can be funny. However, I usually have to listen to the show outside, as the famous laugh puts my wife's back up.

They say that you're the call of the week: http://www.cartalk.com/ct/review/index.jsp

Heard you this morn - you opened the show!

Being a surgeon? Meh, that's OK. Having been on car talk? Now, THAT'S something to be proud of. Congrats.

I love these guys...almost wish I had car trouble so they could give me advice.