Operation, Deconstructed. Five: getting to the nitty-gritty 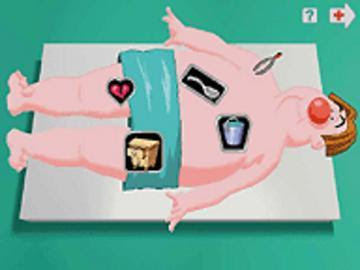 There's a reason for the cliche' -- surgeon barks out the name of an instrument, scrub nurse whacks it into the hand. The reason is this: when you are focused on a particular area -- especially if it's one in which danger lies -- you don't want to look away. If you need to change instruments you lay down the one you're using, open your hand toward the scrub while keeping your eyes on the object of your effort, and want that new tool placed quickly and firmly. So you know where it is without having to fumble. So you can feel it through your glove which, when your palm is open, makes a little trampoline between the bases of your thumb and pinkie. Mobilizing the sigmoid colon from its attachments along the left side of the pelvis is one of those areas. Behind the sigmoid colon passes the left ureter (the tube carrying urine from the kidney to the bladder); causing it harm while working on the colon is a major transgression. Unless the area is distorted by infection or tumor, avoiding the ureter usually isn't difficult.

I'm standing to the patient's right, turned slightly footward, affording me better access to the left side of the abdomen. With my left hand I grasp the mid-portion of the sigmoid colon and pull it gently but firmly toward me, exposing the lateral mesentery. "Long Metz," I say (it's more of a request than a bark), and feel a smart snap into my hand. I love it. Some scrubs seem a bit reluctant really to whack it in, but I don't know any surgeon who doesn't appreciate that crackle, the absence of which means fumbling around to figure where the business parts are. "Nice," I acknowledge with a masked smile. "Old school. I want you on all my cases." Worse is bringing the instrument into view ready to cut, and finding it's been handed backwards, with the curve of the blades opposite to the curve of my fingers. (Most surgical instruments are curved, making them an extension of the hand, conferring versatility. The default direction is that the tip continues the curve of one's hand. Sometimes I want it backwards; but only if I say so.)

It's as if the body was designed with surgeons in mind. Things come apart just where they ought. In some places, there's even a dotted line. Along the outer edge of the ascending and descending colon, where the peritoneum covering the abdominal wall joins that covering the bowel, truth be toldt, there's a white line (see, that's a little in-joke: it's called the white line of Toldt.)

The pull I'm providing is such that when I incise along that line, the area underneath falls away, exposing one of those little secret spots the body keeps: airy like cotton candy, areolar tissues behind the sigmoid colon open easily (welcoming because I said the secret word announcing my worthiness) with nary a blood vessel to worry or obscure the view. "Stick sponge." I take a ring forceps with a sponge in its jaws and sweep it through the area I've opened, pushing down and away. What few vessels there are slide back. The ureter shows itself and, happy to be noticed, it does the wave: peristalsis isn't limited to bowel. "Metz." I continue the incision of the white line north and south: having cleared a portion of the space behind the colon, now I can easily see where I need to go. Leaving my ring finger in the handle of the scissor, I release my thumb and rotate the instrument 180 degrees, so the shaft is resting on my wrist and inside my forearm while I do a little finger work, further opening the space behind the colon. In a quick move, I spin the scissor back into my hand, cut a little more, use the closed blades as a dissecting tool. Flip it back to my wrist. All surgeons do that move: keeping an instrument in half a hand while doing something else, then regaining full use of it. Still, mundane as it is, that "third eye" part of my brain notices and likes that I can do it. It's part of that little voice that constantly reminds me, whispers in amazement, that I'm here doing this stuff.

I'm moving my left hand up or down the colon as I dissect with my right, providing my own counter-traction as my assistant holds the anterior abdominal wall up and away. My left index finger is working at the edge of the cut I'm making in the peritoneum, exploring and exposing. It all takes only a minute or two and the entire left side of the sigmoid colon is opened up, and I can elevate the bowel a couple of inches further than when I started. Now I can begin to decide where I'll be dividing it, having converted the S-shape into a C. It means the whole loop can be removed, and the ends will be very near each other; which is one of the reasons I like sigmoid resection. It just falls into place...
Posted by Sid Schwab at 7:38 AM

This is nice. Please continue with the operation while we wait until the patient is sewn up and shifted to the recovery room to comment on your style.

I'm beginning to wish there were photos of this things.

ditto to the previous two comments.

I did a story about your blog on www.thecancerblog.com.

It should post around 7:30pm on Friday May 25th.
check it out!
Kristi Collins

Double ditto what Jean said. As I was reading this I was thinking that I would like to hear you narrating a video as it is difficult for this lay person to visualize the techniques.

I appreciated hearing about the happy waving ureter since my world this past 17 months has been all about my ureter which by the way - I think is on it's way to being a happy ureter again. I will post about it in the near future.

As general surgeons can possibly harm the ureter can or do urologists sometimes injure other organs other than where they operate? I've read that OBGYN's can injure the ureter while performing their surgeries.

I am a scrub nurse with nothing to do today and I stumbled upon your bolg. With your description of the surgery I can see it in my mind. It is very entertaining to read.

With all due respect to the important role of nurses and other critical surgery staff , how on earth can they contain themselves? Do they not want to peer inside for the procedural details, later inquire why this instrument then as opposed to that one, etc? How is, for them, surgery not like attending a fair and foregoing all the rides and games?

anonymous: often they do. Of course the scrub nurse has a ringside seat, and can see everything. It's common that we explain why we're doing what, and that the staff ask questions. Not as common as it might be; but I always loved to spout off about what I was doing, and why.