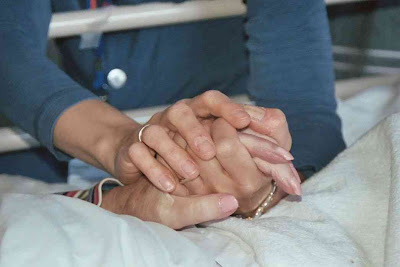 Before there was hospice, there were house calls. As ought to be obvious, I'm old enough that I've practiced surgery through many changes. Early on, when I could, I had to be my own hospice, sort of. Having observed families dealing with death, both in my practice and in my personal life, I came to believe that there was great benefit from keeping a patient at home as long as possible, even to the end. As exhausting and draining as it often is, the family members who did it seemed to gain a palpable measure of comfort themselves, a deep sense of... satisfaction. (Can we agree forever to ban the word "closure?" What a load of new-age crap that is! In the death of a loved one, there's no such thing. Acceptance, finding a way to live with it: yes. But closure, like it's over, like going through a door and shutting it behind? Please. )

I realize it's a tricky subject: not everyone is able -- for a huge number of absolutely important reasons -- to manage it; nor would I want to imply here, or to have created then, a sense of shame in those who couldn't. What I did was to offer as much help as possible, such as arranging all the needed equipment, a visiting nurse, and (less often than I'd have liked, but as often as I could manage) to visit myself. Irregularly, briefly, when I could; when they didn't live too far away. When I visited, I got as much (more!) out of it as did the patient and family. Sometimes I'd notice something that could be changed for the better. Usually, though, it was just a matter of saying hello, of holding a hand, smiling and touching. And of being impressed at how people managed. More often than not, it was a small house, sparsely furnished, a living-room dominated by a hospital bed and commode. The center of everything, quite literally.

The mechanical stuff -- beds, commodes, assist devices -- was just stuff. It was the idea of the actual moment of death and its aftermath that was the biggest hurdle to overcome in encouraging home care. People needed to know two things: if it got to be too much, all they had to do was call and I'd admit the patient. Some did, some didn't. And they were reassured to know that they could contact a funeral home in advance, and could call them to take the person whenever they were ready. It's a brave undertaking (!). Among the most cherished notes I got from patients and families are those thanking me for encouraging and helping with death at home. More than a gift to the loved one, it's a gift to oneself. With hospice, of course, it's a much more comprehensive program, giving much better support than I ever did, and taking care of all of the details. Thankfully, hospice came to our community around the time I was busy enough that it was harder and harder for me to take the time.

When I decided on med school, I had no idea I'd end up as a surgeon. Good 'ol Doc Schwab, driving his Model T to the homestead, feeling pulses, shaking down thermometers, and delivering the occasional baby on the kitchen table, was how I imagined it. The closest I ever came was making those house calls to the dying. Like the days of old, there wasn't much I could do -- check a bandage, lay my hand on a belly (one in which I'd usually been, earlier) for no particular reason other than a sense of connection to it, write the occasional prescription. Sometimes trying to answer the question, "How much longer, doctor?" But in being there, just being there, I felt more like a true physician than at any time I can think of. Even in failing to cure, there's never nothing to do. I wish there were more time to do it.
Posted by Sid Schwab at 5:40 AM

If I can use the word, I would say that I've "enjoyed" your last 3 posts more than any other recent posts. Being in veterinary medicine, I hope to keep your reflections in mind, no only when giving bad news to clients but also when guiding then through the process of deciding for or against euthanasia.

Just discovered your blog. Great musings on death and dying and the role of the physician. I'll probably use your posts on my blog in the next few days with some more commentary there. Glad to hear a surgeon's inner thoughts.

And I wish there were still housecalls. At the ten year mark of a progressive, undiagnosable condition pervasively affecting peripheral nerves, bone, muscle, connective tissue, and to a lesser extent skin, I became too fragile for safe transport outside the house, even by stretcher.

My adaptive requirments are so unique that my family looked into institutional care and it's out of the question - I'd go immediately from semi bedridden to fully bedridden.

As a result I've been essentially without medical care for about three years, unless you count an overworked nurse practitioner.

when i was studying surgery there was no shortage of examples of surgical skill that i had to follow. however, there were only two examples of surgeons who had not lost that human touch. i tried to emulate them. reading your blogs, i now increase that number to three. thank you for your example

p.s i really do find i'm confronted by my own mortality when dealling with death and dying. that's not to say i avoid those patients because of the feelings they evoke in me. on the contrary i try to treat them the way i hope someone will one day treat me when i'm on the last leg of my journey.

Thank you Dr Sid. You are so spot on about saying: Let's ban the word 'closure' when we talk about death. My 17 year old son died two years ago. He drowned and people have said to me - shame, if they find his body you will have closure. Well I don't think so. The challenge is not to achieve closure but to learn to live without him. To learn to continue to live with grace and courage. Thank you for the Blog! Lesley

the word "closure" has irritated me since i first heard it. i do not know why the dead cannot accompany us the rest of our life. when i see a movie, or read a book, which i know would have interested my father, i vividly recall the disucssions we had on similar ocassions, and imagine the converstatin the two of us would have had on this one.

i am not a "card carrying member" of any church, but the point of religion is the community of the living AND the dead. There is no such thing as "closure" when one has any sense of the meaning of caritas or agape--the basis of the Christian experience (and i am sure there are similar symbols in other religions). consider the words of the mass before communion!
Nor does closure makes sense in criminal cases. Good thing plato didn't seek "closure" when socrates was murdered (justizmord) or we would not have the dialogs which are one of the two or three foundation stones of occidental--and not just occidental-- culture.

the purpose of the term "closure" is is obvious: it says "forget". but why would anyone want to forget a loved one?
i would really like to know who first used this word and who mounted the "advertising campaign" that has made it a "household word".
robt. anders

How encouraging to hear your sensitivity and insight through the death trilogy you've written! You're not alone; most all caregivers experiencing similar compassion and perhaps helplessness, each in her/his own way. As a professional health care chaplain, I want always to be available to patients, families, and staff to reflect, to seek out that which gives us meaning and insight during ultimate moments. Chaplains are specialists in the "care of the soul." We approach healing in a classical sense of being with others to embrace all that gives live, and that includes facing finitude and mortality, as well as the highest qualities of faith, hope and love, embodied in our humanity. We do not believe in "there is nothing more we can do." There is always care, gratitude, love, beauty and reconciliation to share with dying patients, often unexpressed. We need to assist one another in realizing these strengths. There is both medical palliative care and emotional/spiritual healing to provide. Experience shows us that touch and even the simple being alongside, is healing and comforting. Somehow many doctors express a sense of "failure" in the face of death. Yet beyond "medical management," having provided skillful and compassionate expertise for the body and kindness through attentive listening skills is "doing everything" for patients and families. Humility comes from Latin's "humus" which means earth, and indeed we are created to be part of that renewing cycle of life and death which marks the seasons in which we live and die. Health care chaplains are committed to providing spiritual support throughout the course of illness and beyond. We trust God as we are grounded in our own faith traditions, and we trust the inner spiritual strengths (including their spirituality) of caregivers and those for whom they care. Thank you for your reflections, and bless you, Doctor.
Chaplain Virginia.