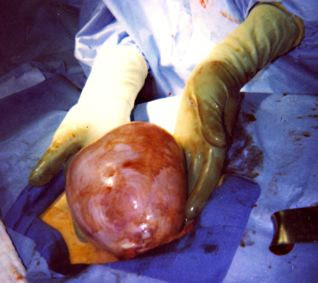 One day when I was in college, when my hand was near my lower abdominal wall for reasons I don't entirely remember, I felt a lump. Off to the right, a little below my belly-button, and just under the skin, it was firm, smooth, and moveable, sort of ovoid in shape. Maybe a half-inch in size. It scared the crap out of me.

Mine was a very small college, just over a thousand in the entire student body, and all male, which narrowed the health care needs quite a bit. So the student health service -- such as it was -- was sort of a mom and pop operation, literally. A doc and his nurse wife, housed in a small one-story building, with a tiny lobby, couple of chairs and magazines, maybe two exam rooms. In the back was the infirmary: the size of some people's bedroom, it held about three beds, meant mostly for guys who didn't feel like going to class that day. No one very sick could stay there, if he planned to see the next sunrise. Mister Brown the doctor, is what we called him. Not known for medical acumen, he could splint a fracture from the athletic fields, look at sore throats, stick a thermometer in your mouth; none of it done with much enthusiasm. Whatever his practice had been before he settled in on campus, at this point he was clearly there to glide into his dotage.

But I had no choice. Lugging my lump, I went to the clinic figuring even Mister Brown would be able to tell I had cancer, and let me know if there was any point in studying for finals. I signed in, and sat for what seemed way too long, unregisteringly aiming my eyes at a magazine, clammily. When I was directed into his office, Mister Brown asked, without looking up from some papers, "so what's the problem?" Said in a tone that suggested, had I ever been there before, the question would have ended with "this time?"

"I found a lump," I said, as if it might be the last words I ever spoke.

"Show it to me," he ordered, in a way that would ordinarily accompany a heavily-burdened sigh.

I lifted up my shirt. Mister Brown leaned partly out of his chair, reached across his desk, and touched the lump with his index finger, rolled it around a little, and sat back down. Flipping over the paper he'd been reading, he said, "I don't know what it is, but don't worry about it." If the preceding details are embellished at all, the words are exact. I could never forget them, because I found them so stunning. Along with the fact that those were the only words he uttered before excusing himself. How, I wondered, could you reconcile the two thoughts: the doctor doesn't know what it is, but is telling me not to worry about it.

Forty years later I'm alive and I still have the lump, so I guess he was right. Given how frightened I'd been, and how completely unsatisfactory the encounter, I can't imagine why I didn't go somewhere else for another opinion. I guess that concept was just foreign in those days. But I remember how I felt, and it was important to me throughout my years in practice. In fact, I told the story many times, when seeing patients with clearly benign but not necessarily bedside-diagnosable lumps.

It's possible with the vast majority of lumps and bumps people get, to assure oneself by context and by exam that whatever it might be, it's not dangerous. Location, texture, shape, behavior all can add up to a safe clinical assessment that a thing is innocent: a lipoma, fibroma, cyst of one sort or another. Reassuring the owner, however, takes a little more than "don't worry about it." You'd think even a guy like Mister Brown would know that. He probably did, but at that point in his career was beyond caring.

Removing little lumps and bumps in the office is something I always enjoyed. It's recreational: simple, non-threatening, a way to show off my skills with local anesthesia and gabbing with a patient while puttering around. Prior to doing it, I'd always have tried to reassure the person that this thing was harmless, and I rarely failed. Removal nearly always was because the lump in question bugged him or her, rather than frightened them. Reassurance is easy: tell them the characteristics on the basis of which you are sure it's ok; list the possible causes of a lump; say why you're confident it's safe to leave it, and offer to remove it if they prefer. Taking only a few moments more than Mister Brown had, maybe with a little eye-contact as well, knowing that these things are frightening to people.

I'm pretty sure I didn't need that personal experience to have had the sensitivity and ethic of treating patients as I'd want to be treated. But it gave me a cute story to tell people when I didn't have an exact name for their lump, yet was sure it was no big deal.
Posted by Sid Schwab at 9:27 AM

In a medical world which often seems too divided between caring and cutting, talking and treating, your posts show an attitude that manages to display a blend of professionalism and humanity, an understanding of bot h the patient and the disease. If and when I'm in a position to medically care for someone, I hope I manage to half as well as you seem to.

not long ago, i found a lump on my side almost exactly as the one you described on yourself. i'll be asking my doctor about it next visit, and i'll be sure to appreciate that he's not the type of doctor to give cursory, uncomforting answers. it's definitely the little things like that patients care about.

OK, I'll bite. Tell me about your skills with local anesthesia. It has always been the most painful part of excisions in the office and I would love to learn how to do it better. I don't recall learning this at SFGH.

OB: It's a good idea. I'll write a post about it, rather than comment here.... And you're right: I didn't learn the tricks at SFGH.

Reminds me of a surgeon strolling into the recovery room and informing his patient that they do indeed have cancer. No family support, no familiar shoulder to cry on. Only physical pain which is now accompanied by all the emotions invoked by the diagnosis. Way to go....

indeed it is reassuring that the physician(you),take the time to speak with the patient as another human being.it does make all the difference in the world.

I had a similar lump right before I went into the hospital with pancreatitus and to have my gall bladder removed. I was 20-30 pounds underweight at the time because I couldn't hold any food down, and I could actually see the lump under my skin. My doctor said he didn't know what it was and admitted me for my gall bladder, and I haven't felt it as pronounced since my gall bladder was removed. I don't remember exactly if it was above or below my belly button. Also, for more possibilities, I have six children and we can't afford too many doctors so we have to know what's going on in their bodies to know if it is or isn't a good reason to take them. Once or twice a few of them have lumps below their belly buttons (I have two children with situs inversus and four without so its difficult to always fathom proper organ location :)), but the lump is gone after they go to the bathroom so I figure it was more than likely constipation.