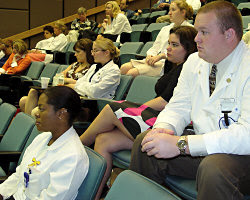 I was in a fraternity in college. (Where I went to college, housing depended on fraternities: there weren't anywhere near enough dorms to handle it on their own. Also, there were rules such that everyone who wanted to be in one, was guaranteed to do so. I say this because people who know me might not consider me a frat-guy.) It was a national fraternity, but on our campus the rules and mumbo-jumbo went out the window. Literally, in some cases. Anyhow, we'd occasionally get visits from some grownups in the national organization. Among other things, it struck me as an entirely useless job: an organization whose purpose was to promote the organization. A self-perpetuating loop of meaninglessness. Which brings me to Grand Rounds.

I'm getting a little annoyed over here. In the last few weeks, the whole raison d'etre seems to have changed. Instead of being a collation of the medblogosphere's current writings, it's become a theme-park at the direction of the current host. Maybe that's fine. Until recently, I'd thought of it (wrongly?) as an assortment of posts chosen from those things the bloggers themselves felt like writing about. Now, it seems to be a high-class meme; a writing challenge of sorts. I like writing challenges: I've participated in a few. (And I ignore memes, which may explain a lot.) But Grand Themes is an entirely different kettle of fish. I blog, in theory at least, because I have things I want to say. Sometimes a subject evolves from a comment or suggestion I get, which is great: it means my blog is stimulating (or so I'd like to think.) I assume that's what motivates most of us. To turn Grand Rounds into a theme dictated by the host is entirely different and, in my opinion, wrong. Want people to write about a subject you find interesting? Excellent idea! Post a request for submissions and call it whatever you want. Just don't call it Grand Rounds.

All politics, they say, is local. The reason I'm annoyed, of course, is personal. I've had a few posts of which I'm sort of proud lately, and which I'd intended to submit for Grand Rounds consideration. But for the past few weeks, in checking out the host site, I find a bunch of rules, criteria, demands. So, rather than write what I want to write, I'm to write what I'm told to write (within an admittedly broad band.) So I don't submit. Or, in one case, evidently, am rejected for non-compliance (can't say for sure: never got a response to an inquiry.) Again: I don't object to the concept; I just object to it as a modus operandi for GR. On the other hand, it's not my gig, and isn't up to me. Plus, I'm still a newbie. It doesn't matter, in the grand order of things, if I stop submitting -- it only hurts me, I guess, to the extent that GR brings readers to my site. But I don't go quietly. I go. But I thought I'd say why. Just in case anyone cares.

The preceding is an opinion. It is not a call for action, even if I were in a position to do so. Grand Rounds should be what people want it to be, and if this is where it's going, so be it. I liked sending stuff in, and was pleased when it appeared. I'll get over it. And for any reader who came here looking for something other than medblog esoterica, my apologies. We now return you to your regular program...
Posted by Sid Schwab at 9:03 AM

I'm in total agreement, and I'm just a reader of the blogs. Can't imagine submitting under those circumstances. To me, the real kudos go to those GR hosts that manage to tie the unrelated submissions together, not those requesting theme-based articles. Keep on blogging doc, it's educational for us patients.

Thanks for plucking the iron string.

I used to enjoy submitting posts to Grand Rounds. But more and more I've been finding myself in your shoes. I've had a few good posts that don't fit the "theme" of the week. What I've also noticed is that the first few "theme" Grand Rounds were presented as suggestions and that adherence to the them was not required. Of late, I've found Grand Rounds themes to remind me of my grade school essay assignments (the what I did over the summer type). I've even found myself less interested in reading the posts on the the themed Grand Rounds. It feels too forced. Grand Rounds was supposed to be the best of the Medical blogosphere in general, not a writing assignment.

(I wrote a post for this past GR, but I didn't like it as much since I was shooting for the weekly theme)

As a nonmedical person who loves to read the many medical blogs, I find the theme trend for Grand Rounds increasingly boring. I hope the concept is dropped. Selfish of me, probably.

I stopped submitting and mostly don't even bother to read GR some time ago.
I think the quality of the writing deteriorated, and there was this progressive incorporation of blogs from those who are not health care professionals of any kind.
Sort of like having Grand Rounds at a hospital run by patients, drug reps, anyone who wants to contribute.

Dr Schwab - Your blog has been one of my favorites since I first discovered this blogging world back in October along with your book - of Course. :)

Totally agree with your point.

I used to look forward to the release of Grand Rounds, but now I just stick to the medical blogs that I enjoy... namely yours of course.

Thanks for blogging about it. I am all for a Grand Rounds revolution.

I gave up on GR a long time ago. I'm still into Pediatric GR, as it's smaller and more manageable.

But size was not my issue with GR, it was time. The entire week was given over to thinking up a good topic, submitting it, writing about having submitted it, reading other blogs...

I've been happier since I got on the wagon.

I've never read any GR's and don't anticipate participating any time soon. However, that's not because I don't agree with GR, it's just that I have a lot of reading that is mandatory for me to pass medical school, do well in clerkships, and seems more important.

Plus I'm a medical student - so I really don't have much to say that's worth more than my own little space in the blogosphere. I don't know enough about anything to really get all poignant and stuff.

I think it is far more enjoyable reading posts that the individual blogger has chosen to write about... It is what makes the blogosphere compelling reading. Keep up the good work with your blog. I like your blog so much I have added it as a link to my own. With best wishes.

All things evolve; even, apparently, GR. Eyeballing the GR archives does seem to confirm the rise of the use of a theme. Some like it; some do not. Those in the latter camp may stop reading or submitting, yet there seem to be plenty more willing to take their place. What better emblem of something truly "coming of age" than to have folks bitching about how it "isn't like it used to be"?

FWIW, I do give Nick Genes tremendous credit for continuing to give hosts full latitude and letting the chips fall where they may.

I was in a sorority at my university--and I committed the unpardonable sin of leaving it to join the cheerleading squad. (I know, I know...I'm not talking about the main point of your post, the GR thing, but you reminded me of my college days, heh!...) (I had more fun with the cheerleading squad, the Greeley game was awesome...)

Well, I don't like anything at all having to do with writing that is themed.

Grand Rounds use to be enjoyable. I stopped reading a while back. Maybe about 6 or 8 months ago.

When it first started posts were to be written with the layperson in mind. Submissions could be from any medical professional or any patient with a medical story or experience. Now there is so much arguing about it that I really don't care anymore. Even one of your commenters is still whining about patients submitting to Grand Rounds. If it is supposed to be for patients benefits then why should they not be allowed to submit?

Besides, if there wern't any patients then there wouldn't be any Grand Rounds! Nor would there be any doctors.

Same thing with Change of Shift. They only want submissions from nurses or posts about nurses. Who is it supposed to benefit? When it is only a bunch of nurses telling stories about how great they are, it isn't really interesting to the general reading population.

you make some important points for grand rounds... i've noticed much of the same, and while i was a frequent early contributor, i find i lack the time to read through GR anymore, much less my favorite blogs. there's just too much out there competing for our attention. hope GR gets more focused and less agenda/promo related.