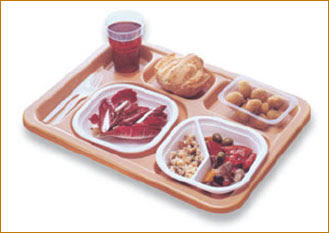 I never wore a white coat. Sleeves rolled up, open collared is how I dressed in my office. (Well, early on, I not only wore a [non-white] coat, for some reason I presented myself with a collection of the most garish ties imaginable. "Oh yeah," people would say when I was mentioned. "The guy with the ties." Somewhere along the line, I got tired of it, and opted for comfortable. Meanwhile, I developed a small lipoma on my left arm, which never bothered me but which, as time went on, I realized people were noticing. I'd be sitting in front of a patient, gesturing this way and that as I explained (beautifully and patiently, I might add) some surgical subject or other, and I'd notice a distracted glance at my arm. Surgeon with some sort of growth, a tumor, not the guy for me....

So I took it off. Laid out all the stuff I'd need, sat on a chair resting my arm on the bed in one of my exam rooms, painted it up (my arm, not the bed) with betadine, stuck on a sterile drape, injected local, made a little cut, squeezed out the lipoma, taped up the wound. My medical assistant had asked if I wanted her there to help, and I'd told her no, just listen for the sound of me hitting the floor, in which case she was authorized entry. Turned out fine: 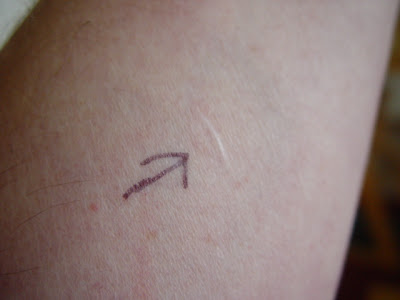 There are lots of stories of surgeons operating on themselves: setting up mirrors, taking out their own appendix under spinal anesthesia. And of course there's the recent saga of the young hiker who cut off his own arm to escape being trapped between rocks. The latter is understandable and more than admirable, if barely imaginable. The former is some sort of showboating, or the mistaken belief that no one could care for oneself as skillfully as oneself. In my case, I think -- being a rather small deal -- it was just wanting to avoid a fuss. I've had a couple of patients who've wanted to watch their operation. In the case of hernia repair under local, I've accommodated the request (properly angling a mirror for viewing while lying flat -- sitting up would have made the surgery impossible). I enjoyed describing what I was doing, hold up this or that structure in the process. Never had anyone faint or otherwise bail out ex post facto.

In the Air Force I worked with a medic who told me a surgeon he'd known had attempted his own vasectomy. As had I, he'd set up all the stuff and excused everyone from the room. Unlike me, he materialized in the hall a while later, unsuccessfully holding his bleeding scrotum, staggered around a few steps before passing out, unceremoniously, in front of the crowd of nurses and medics that had gathered awaiting just such an outcome.

If alone on an island with my Swiss Army knife, I guess I'd take a stab, as it were, at my appendix if I felt I had no other choice. Don't think I'd have tried the vasectomy.
Posted by Sid Schwab at 7:45 AM

Just enjoying your blog... and thought of the woman in Mexico who (supposedly) performed a C-section on herself.

This reminds me of an early episode of Nip/Tuck in which the teen tried to circumsize himself with instructions he found online.

Years ago I told one of my friends about the time my husband dug out his plantar wart and it bled so much he decided he should cauterize it with a blow torch he had on his workbench. I was kind of shocked to consider somebody doing their own little home surgery. Turns out my friend's husband had done EXACTLY the same thing, and a few other friends said they had heard of guys doing it, too. I think the Do It Yourself gene skipped right over me--I'm all about the outsourcing. ;o)

Dr S,
Do you still have your gall bladder?
Should it need to come out one day, what would you prefer: open or lap chole?

If I had me as a surgeon, I'd go with my incredible outpatient, back-to-work-in-a-couple-of-days-or-so mini-chole, done through a single one or one-and-a-half inch incision, in about 20 minutes, for thousands of dollars less than lap chole. But since the secret will die with me, I'd say most people are better off with a lap chole. Sad to say. Some day, I'll write an actual post about it.

you make it sound so easy! except for the vasectomy! ew!
i have a lipoma under my right armpit. do you think it will be a big deal to remove it? its starting to bug me.

The vasectomy story is funny! I'll never understand docs who work on themselves. I used to work with an ER doc who once sewed his own lac---out of pure grumpiness and unwillingness to come to his own ER.

apgarn, can you repost that url for the self-section? I wasn't able to pull it up.

btw, I have tried to flush my own dead spider veins. Not even close to lipoma removal ;)

I sewed up my own finger lac while home on lunch after trying to open a salad dressing bottle with a sharp knife - I struggled to tie the knots because my wife was screaming about the bleeding and laughing because she warned me not to do it ...she is after all a sensitive soul - a lawyer .
We should have sued me for malpractice and gone to Maui with the winnings - I would have settled anyway , because the doctor did such a shitty job!

Motherhood for the Weak said...

I'm not a doc, far from it, but going through IVF and learning to do shots has made me braver. I now cut off my own skin tags instead of paying the dermatologist hundreds of dollars to do so. But a lipoma? No. Not that brave or experienced.

I would be interested to read about the gallbladder. I may have to have mine out (eek!) and I'd like to understand the surgery better.

oh wow that sounds incredible! like the doctor in the russell crowe show (commandeer i believe)- he cut out his own appendix with a mirror. eeks! ooh yes pls do write something on the mini-chole, it sounds absolutely fascinating!

Laughing that hard after that much coffee is to be avoided. Great post, doc.

Actually, I went to emerg with a migraine and when the doc found out I was a med student she asked me if I had done my own neuro exam (well, if I had I was hardly going to admit it). She then told me all about the med student who had done her own gyne exam before presenting....

You got me lying to the kid again.

Nope, not going to explain self-vasectomy. Not gonna do it.

anonymous who sewed up his own finger and then nearly sued himself, thank you for your comment. can't remember when last i laughed so much. you have done the almost impossible. your comment upstaged the actual post, which, as usual, was brilliant.

Long ago and far away when I was a kid, my family dentist was a mad Swede who'd extracted a couple of his own back -- I'm pretty sure "wisdom" -- teeth. Given his grudging attitude toward Novo/Xylocaine, I only hope the old cod did that sans anaesthesia.

My younger brother bit him on his first visit, and Mom had to find him another dentist. Damn, why didn't I think of that? Being a Good Girl is such a bad habit.

Huh. Is Xylocaine called that because it leaves the injected bits with no more feeling than a piece of wood? Wonder where I can look that up.

Anyway, I've snipped a few of my own skin tags and I suppose I could do my own insulin and such injections if I neded them. Lipoma, yeah, maybe, with a local. (Maybe without; it's just one cut, right? Sutures might be a problem though.)

Anything else... You know, I'm an editor as well as a writer, and I tell writers that doing one's own editing is like doing one's own brain surgery: It doesn't matter how good you are; it's the angle that's impossible. Sometimes do-it-yourself just is not a good idea.

Dr. Schwab, This post reminds me of a saying my late grandfather used to quote."The physician who treats himself has a fool for a doctor." He was a surgeon and I remember him cutting a fishing lure from his forearm Rather than bother his physician friend and neighbor.

This reminds me of a recent video post on Medscape about a doctor that does "fingernail surgery" to remove his seborrheic keratoses.

Good stuff, sid. A few years down the road, I don't think I'll be doing any of my own procedures... there's a definite conflict of interest there if I screwed up. :)

Have you seen the movie "Master and Commander" with Russel Crowe? The ship's surgeon is accidentally shot in the gut and he does surgery on himself (on an island) with the use of mirrors. He also does brain surgery on one of the crewmen while everyone else watches (onboard a still moving ship).