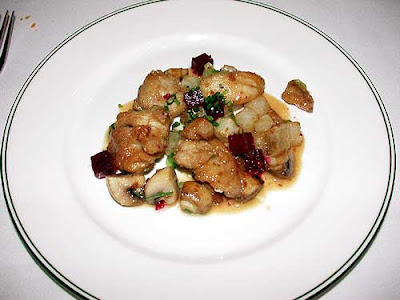 The good news is most of us will never have a reason to find out. The bad news is we all walk around with a self-destruct button in us, and I'm not getting all Freudian here. Of all the vital organs, there's only one that can -- sometimes with only the slightest of provocations -- turn on us and literally become our worst nightmare: it can eat us alive, from the inside. All the while, doing only what it thinks it's supposed to do.

Operating on the average person, this organ is hard to see, let alone get to. In someone healthy and maybe overly skinny, you can sometimes get a surprising view: delicate, fluffy and pink, demurely lying behind a shiny film that in the rest of us is more opaque. Looking at it, you'd never guess how destructive it can be. In that ideal patient, it looks like something you'd like to rest your head on. No wonder it's called "sweetbreads."

"The normal pancreas is firmer than normal," is what a professor of mine liked to say. He was right: in manually exploring the abdomen, there might be a tendency to think you've found a problem, discovering a rubbery-firm pancreas. It looks (when you can see it) like it ought to be softer. Maybe in the uber-normal, it is. Maybe it routinely gives itself a little trouble more often than we know. In any case, the pancreas is an organ of brooding and explosive mien, no matter how it looks or feels.

In any anatomic drawing, in order to show the pancreas it's necessary to leave something out. Here's an example: 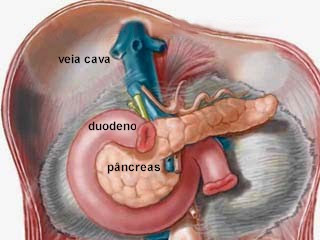 You get the idea of the fluffy pinkness; you don't see the stomach or the colon, because those organs, seen from the front, cover up the pancreas, which lies crossways across the very backside of the abdominal cavity. Operating on it, in other words, can be challenging on the basis of anatomy alone. Add in inflammation, a few digestive enzymes, and tissue not really ideally textured for holding a stitch, and you've got tough surgical sledding. But I'm getting ahead of myself.

If you want details, here's a place to start. The basics are these: the pancreas does two important and unrelated things. First, it produces insulin which controls blood sugar levels, and diminished levels of which cause diabetes. Insulin is secreted by the pancreas directly into the bloodstream (that's the definition of an "endocrine" gland.) Second, it makes several digestive enzymes, which flow through ducts and exit into the intestine (that's what "exocrine" means.) The drainage end of the pancreatic duct joins the draining end of the bile duct (which carries bile from the liver into the intestine); that juxtaposition is important in a bad way, pancreatically speaking. It looks like this: 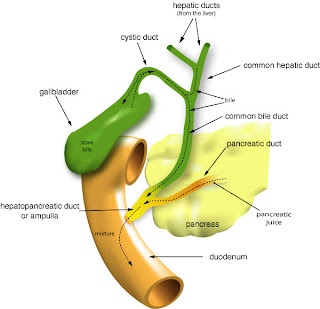 The complicated anatomy within and around the pancreas, in another context, provides surgeons -- especially surgeons in training -- a cornucopia of delight: removing the head end of the pancreas provides a little bit of everything a surgeon does. I've mentioned all that previously here and here. In its other iteration -- the center of an awful inflammatory process -- that anatomy is nothing but trouble. To give you an idea: we used to keep a sterile ladle, of the sort you'd use in a tasty soup, on hand in the OR to scoop out the stinking soapy detritus of acute pancreatitis. I mean that quite literally: add certain activated pancreatic enzymes to the fat in the area, stir in a little calcium salts, and you get saponification. Soap. Wash behind your belly-button, kids.

What we're talking about here is inflammation of the pancreas, "pancreatitis," which comes in two basic forms (acute and chronic) and has three main causes (no self control, no control, and no clue.) That last triumvirate is wordplay I just made up. It refers to alcohol, gallstones, and "idiopathic." Skimping on detail, suffice it to say that excessive drinking, especially of the binge type can severely damage the pancreas. With gallstones, it helps to look at the above diagram again: imagine a gallstone passing from the gallbladder and lodging at the very far end of the bile duct. Under that circumstance, bile may be forced backwards into the pancreas. That's the likely cause of "gallstone pancreatitis." As for the last category, it's sort of a waste-basket diagnois for "it could any of a number of things, and we may never know."

Some of the sickest patients I've ever cared for are those with the complications of acute pancreatitis, and their surgical needs are as daunting and taxing as it gets. Those with surgical issues related to chronic pancreatitis can sometimes actually be sort of fun. And now, I think I've done enough exposition. In the next post I'll get to the surgical stuff.
Posted by Sid Schwab at 8:04 PM

Awesome post! I always appreciate the educational posts you do.

A long time ago during my surgical rotation the Chief resident told me that there were 3 rules of surgery. 1. eat when you can; 2. sleep when you can; and 3. don't f*** with the pancreas.

interesting comment by mark. makes me realise how small the surgical world is. that very comment was also quoted to me in my training and how true it is.

Acute and chronic pancreatitis is clinically interesting from my point of view as well (medical as opposed to your surgical point of view). These patients are challenging and unfortunately just eventually and progressively get worse.

I realize this comment does not pertain to this post, but I have been reading your blog for a while and have a question/comment. Why are some doctors just so very bad? How does someone who is just not intune with people get certified to practice medicine?

I had clear, classic gallstone symptoms and the GI blew off my symptoms and pain to prove he was right (claiming my pain to be colon related.) I ended up in the ED having emergency surgery because he wouldnt listen to me and I was left to hunt down and explain to a surgeon my issue (prior to my ED visit).

I am dumb-founded that a doctor would not listen to and properly treat a patient who clearly expressed symptoms and pain.

The surgery showed a GB full of stones and swollen. Along with an ovarian cyst that showed up on the sono but the GI failed to mention. Since the removal of the offending gallbladder on Friday, all prior pain and symptoms are gone.

As a wise man once said, "if God had wanted us to operate on the pancreas, he'd have put it somewhere else!"

I came to learn the power of the pancreas a few years ago. One of thehospital's favorite hospitalists had been having stomach pain for a while, and finally went in for a CT. Walked into the radiologists office as the scans came up, took one look, walked to the medical directors office and retired. He had pancreatic cancer, and died less than four months later...

Interesting post. As someone with what's thought to be autoimmune pancreatitis, the "don't f*** with the pancreas" explains succintly why no one seems game to biopsy to confirm the diagnosis

Hey I always thought sweetbreads were just brain.. who knew.
And us RN's love the no control, no self control and no clue comment! HILARIOUS.

This is/will be an interesting series. I'm particularly interested as my aunt died after a whipple procedure to remove what turned out to be a non-cancerous tumor....her pancreas did her in either way....

what can I do about ercp enduced pancreatitis(complication of the procedure)?I can't eat anything without fear of inflamming it and been ignored from the doc who performed it. I has now affected my mind as well. Help me ..Please?\Sue/Sarasota, FL.

Sue, sorry to hear about your troubles. I hope you are feeling better. Your post was a few months ago, so I don't know that you'll even see it. Would you mind sharing the name of hte Dr. that is ignoring you? I'm having pancreatic issues and have a Dr. that is blowing off what is going on. My e-mail is LTrautweiler@aol.com and I'd love to chat. HOpe you are better.

Hi, I had acute pancreatitis in 2001. Induced via ERCP exploration, how comin is this? he Consultant said he just 'annoyed' the entrance (exit is probably a better term I guess) to the pancreas and things just snowballed form there.

I never really appreciated how bad it was until I read this. However, this may be because I was hepped up on pethadine most of the time.

The soup ladle intrigues me and horrifies me at the same time. I know I have a reasonable amount of complications due to the mess left behind. Still I am healthy now and forever in debt to my Surgeon and Gastroenterologist.

Pancreatitis is a known risk of ERCP. As stated in this article,

What are the complications of ERCP and ERS?
The principle complication of ERCP is pancreatitis. This is a condition where the enzymes produced by the pancreas are activated and released upon the patients own tissues. This is an extremely painful condition that may run a variable course between self resolution over several days to an extremely fulminate disease process that causes respiratory failure, renal failure, hemorrhage, shock, and death. These severe cases can take months to resolve and require ICU care for weeks. Pancreatitis occurs after 10% of ERCP procedures, and develops into severe pancreatitis about 1% of the time. Doctors do not know how to prevent or modify the course of pancreatitis.

The good news is you can have a pancreactomy with auto islet cell xplant. It really helped me tremendously. I'm not saying there are not issues with that and I'm not saying it's end of all surgeries. I'm just saying, there is nothing worse than CP. It's a really painful killer. UGH just glad that chapter is my life is OVER