I've not ever tried my hand at fiction, so when Cathy announced the second in her series of writing challenges, I figured what's the worst that could happen? Lose all my readers? Embarrass myself across all of cyperspace (or at least my little corner of it?) Well, yeah. But I did it anyway. So below is my (completely inexplicable, in terms of the direction that happened) blessedly brief and failingly feeble attempt at creative writing. The game, as ordered, was to write something the final line of which (from Ian Fleming) is: "I shall not waste my days trying to prolong them." 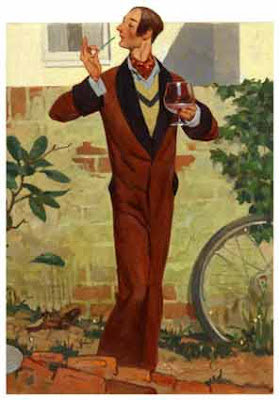 A natty dresser, he. Spiffy, he liked to think, what with the ascot, the jacket tailored just so, tastefully adorned with a perfectly folded handkerchief, crisply saluting from the breast pocket. (God knows he'd never use it: who could possibly carry mucus around in his pocket, heaven forfend.) Yes, Roger St. James-Beecham Fairfield Campbell was an impeccable man -- a man not generally given to self-doubt, much less self-assessment. Even his automobiles were perfect: the Jaguar (jag-you-are, not jag-wahr!) Vanden Plas oiled and polished for everyday use; the Bentley for when Bailey was sober.

The only person who knew Roger had been born in Queens was his mother, and she didn't remember much any more. Not that it mattered. Roger St. James BFC was ensconced and insulated, well away from the boroughs, where his practiced sublimity could be fully admired. Waco was undeserving of its reputation, really. That Janet Reno mess: how calamitous! Yet it had, in its own way, precipitated a new sensibility. Waco needed some culture, and Roger was just the man to provide it. He'd seen enough movies to know how. Cary Grant, William Powell, Basil Rathbone. Accouterments, and the right diction, make the man. For the purposes of this story, it's not important to know how Roger obtained his wealth. In fact, it would unnecessarily taint the reader's notion of him. Anyhow it's not as if everyone gets Platinum Card offers. There are standards. If Mr. St. James Beech...etc, etc, didn't deserve them, he'd not have received them. He had them, he used them. Enough said.

Proud as he was of his suavity, as carefully as he'd cultivated it, groomed it during countless hours of reflecting on his reflection, Roger knew he'd never be seen as anything but foppish in Waco, absent a woman on his arm. Even Cary Grant -- or his agent -- understood the ways of that world. So he set about finding one. Finding one: not particularly difficult. Keeping her: sticky wicket. Roger, it seems, had a problem. Other than with himself, he'd not... he couldn't... well, discretion requires a certain reluctance here. It wasn't just on his arm that Roger had never had a woman. Waconian women, it seemed, were quite taken with a clean and powdered man and his silky automobiles; more than willing to take a ride, as it were. But they were not without certain expectations. "Roger," they'd say, after a few weeks of good diction and tea. "I like you and all, and you're really smart and stuff like that, but, well, you don't seem to know shee-it about women. It's been real fun, you're a fun person and all, but damn, Roger! Don't you even want to hold my hand??"

"I should like very much to engage a female for the purpose of instruction," Roger St. James-Beecham Fairfield Campbell announced as he strode -- less confidently than his demeanor would suggest -- into the drawing room of the Mustang Ranch. Driving nonstop from Waco to Storey County, Nevada had been easier on him than on Bailey, who was noticeably tremulous by the time the Bentley glode to a stop, gate-side. He made eye contact with the Bombay Sapphire before considering how else he'd spend his time during his boss's tootelage. While piloting the auto, he'd tried to offer advice and encouragement. "It's messy, sir. You'll have to expect a certain, well, a splash of liquidity. It's a bit of the animal, sir."
"Yes, yes, I'm not exactly a child, Bailey. I've watched "It Happened One Night" a hundred times. I'm quite aware..."
"Of course, sir. Nature will have its way."

Oh my goodness, thought Roger. Claudette Colbert was so much less... so... there was a sheet, after all. This is quite provocative. Quite. And yes, threatening. I'd had no idea. There's so much... it's so... How can this ever do? Why, it looks so... untidy....

Misty Sunshine did all she could. Her client was certainly not the first to seem so reluctant, so unfamiliar. So. Repulsed? By certain measure, he was obviously game. And resilient. Yes, his interest, it was evident, rekindled quite quickly, and impressively often. Yet she could tell he was not engaged. In addition to insisting on complete darkness, he'd brought moist towelettes which he used disconcertingly liberally. And rapidly. Everything, rapidly. "Hon," said Misty Sunshine, touching him most intimately, "You came here to learn, didn't you? And I'm trying to tell you as nicely as I can. You got to learn to like the, well, the whole thing. The noise, the sweat. It's gotta be fun, sugar, and you really gotta try to slow down. Make our little hugs last a while."

"Madam," spoke Roger St. James-Beecham Fairfield Campbell, drawing himself purposefully up from the bed, mustering as much dignity as one can do, absent pants; releasing the latest towelette with a dismissive "p-tooey" motion of his fingers, buttoning his never-removed shirt. "These little hugs, as you so quaintly call them, are quite long enough for me." He smoothed his hair as he walked toward the door (he'd not removed his shoes, either.) "In fact," he said, as he turned the doorknob with his handkerchiefed hand, "I find them entirely abhorrent, and most certainly I shall not waste my days trying to prolong them."


Many others have responded to the challenge, more successfully than I. Here's a list of links to everyone (far as I know) who took up the gantlet:

That's a very witty interpretation, Sid. Not bad...not bad at all!

Dr. Schwab, I think you have just written the first chapter of your first "fiction' book.

You know I was in a funk and not even sure I wanted to proceed with this challenge. It was this story that brought me out of it. I hope everyone comes and reads this, and encourages you to write more fiction. It was pretty darn good!

Thanks for taking this challenge!

Very witty, it seems you talents for the medical profession may be surpassed by your ability to write. Nice story, Roger is quite dapper........ Interesting.

I just had THE worst shift in ages and I am laughing so hard I'm crying!

I needed this story a lot more than Roger needed, well... you know! : D

Most excellent job, and I happen to absolutely LOVE Basil Rathbone, by the way.......

awesome. i loved it!
i only wish there were more adventures, maybe a cross country roadtrip?

Don't put yourself down, Dr. Schwab. This is great.

I liked your character a lot...very colourful! I'm making my way through everyone's stories (slowly) and I think it's very interesting to see how everyone is taking that line and interpreting it and weaving it into a story line.

I felt you really had to use your imagination with it and you certainly did!