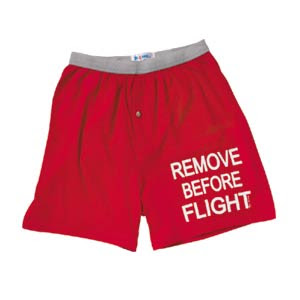 Early in my training, I noticed that some attendings would strip raw before putting on their scrubs and heading to the OR. Given who some of them were, I found it sort of creepy, as if at some point they'd lean over to the scrub nurse and whisper, "I'm not wearing any underwear." I never liked seeing my dad naked, for that matter, and I certainly didn't want to watch those old guys parade around. But, it turns out, there's a good reason. Sometimes, surgery is really messy.

When I started in this game, AIDS was unknown. We took certain precautions, of course, but getting drenched was just part of the deal, especially at the county hospital, where we treated every instance of trauma that occurred in San Francisco. Neither the cloth gowns we used at first, nor the paper ones that came along later were particularly water-proof. Operate on a guy bleeding out from a few stabs or gunshots, and you'd finish the case soaked in blood; literally, it could fill your shoes. Remove the gown, and the scrubs were wet with sweat and blood. Remove the scrubs, and your front side might look spray-painted. Pink pubic hair: not a good look, at least on me. The smell and stickiness of blood: not pleasant. Showering after looked like the scene from "Psycho," only in color.

My friend Bill Schecter, now Chief of Surgery at San Francisco General Hospital (he was one of my junior residents when I was chief resident), tells his residents if they want to see their grandchildren, they need to wear rubber gowns, full facemasks, and tall boots. At SFGH, it's assumed that everyone they operate on has HIV. In my practice, it was rare indeed. On the occasions when I knew in advance I was operating on someone with AIDS, I wore a rubberized gown, and it didn't work for doodly. I was still gooey at the end. And for some reason, I never made it purely habitual to remove my shorts before operating. Decorum? Shyness? Don't know. But more often than not, at the end of a thrash of a case, I'd be washing out my underwear in the sink, wrapping them in a hospital towel, and taking them home. I've got a nice stash of towels embroidered with "Central Supply." They make perfect bath mats.

One of the old surgeons where I live used to like to speak to his patients' families still fully gloved and gowned, particularly if bloody. I assume he thought it made him look like a knight in dripping armor. Made him look like an ego-addled jerk, was my opinion. And it would never be allowed today.
Posted by Sid Schwab at 1:00 PM

I think it abhorrent that a surgeon or any doctor for that matter would talk to a family covered in blood. It's completely unethical and traumatizing to the family. I'm glad that "showmanship" like that has been dealt with.

My preceptor would occasionally talk about taking "iodine showers" to wash off body fluids when he was on trauma service in Philly. It sounded horrible.

The things you don't think about when you're being operated on...is your surgeon naked under the scrubs?! Well, if it saves your undies then there is some rationale there. But I don't think it's appropriate to announce it to the other staff. Do the nurses (or other doctors) really care?! I mean, if I went "commando" I wouldn't announce it to the people I worked with--even if there was good reason for it *rolls eyes*

And yeah. Approaching members of the family bathed in blood? What are you trying to do, recreate the prom scene from Carrie? Okay, that's a weak joke but I tried. Nonetheless, completely unprofessional and also a bit of a biohazard? Surely the surgeon can take the time and get suitably cleaned up.

Thank you for writing this blog...and your book. It makes me even more determined to reach my goal. I will never be a sugeon, that I know, but I am determined to become a doctor and as I kill myself to get through finals this week...I am inspired when I read your tales.
Thank you,
Peggy

Love reading your blog, need to get your book, and particularly enjoyed reading the linked item on Bill Schechter. Now, for that boxers or briefs question. I never would have questioned, or even thought about that issue. Now that thought is probably going to linger in my head each time I see my doc in his scrubs!

Another question...do you think if I ask my orthopod surgeon if he goes commando when he operates, will he think I am nuts. LOL can't stop laughing...
Peggy

commando: nuts. Hmm. Don't know. But he might think you're plastered before the operation instead of after.

Dr., I am curious. What do you thinkk about my experience with CT surgeon in Indianapolis?

I am a 59-year-old retired US Army master sergeant. I was compelled to start a blog to alert unsuspecting patients that have been told they need a coronary bypass that you probably don't. I was told by an interventionalist cardiologist and the consulting CT surgeon he called in on my case, in April 2004, that my heart was in great shape, but I needed a quintuple bypass because two arteries were 100% occluded and three were more than 85% blocked. "Why," I asked, "is my heart doing so good when the vessels that feed it oxygen are all clogged?" Despite being told I needed surgery right away and that I was a walking time bomb, I got a second opinion from a noninvasive cardiologist and I am glad I did. Not only did I save myself from getting my chest cracked open in a major surgery, I saved a lot of money. I invite you and your readers to my blog to read of my adventures in medicine.

Very true about the impropriety of seeing the family with their loved one's blood visible (and sometimes other stuff - it's amazing how little bits of fat can find their way onto the legs of your scrubs). With the layout of our hospital, you pass thru the locker room on the way to the family waiting area. I always pause in front of the mirrors on the way, probably not a shock to anyone familiar with the average surgical ego. In this case, though, it's for what I call the "BBF" check - "blood and body fluid." If there are blood stains visible (usually on the lower part of the legs), I change scrubs before continuing out to the patient's family. Absolutely no excuse to do otherwise.