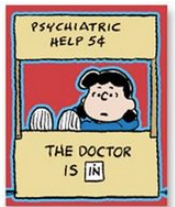 I know I have at least one psychiatrist reader who passes by these parts. So Dr W, this is for you:

As I mentioned a post or two ago, when I was in Vietnam, part of my job was that of a humdrum office doc, when we weren't being rocketed or, rarely, shot at. While humdrum, being in Rocket City wasn't exactly your normal existence, and it was not infrequent that a GI came to see me with the complaint, "Doc, I can't take it anymore."

For most of these poor guys, there really wasn't a hell of a lot to do: sympathy, the occasional specific suggestion, once in a while a kick in the pants. Except in rare circumstances, there was no choice but to send them back to duty. On one or two occasions, I'd give a guy a break, and bed him down in our small inpatient facility for a day or two.

There were lots of backaches, headaches, sore this or that which begged a duty excuse (and I must say that during the time I had to lift my right arm to the desk using my left arm, I got fewer requests for duty excuses); once again, for most it was some sort of analgesic a pat on the back, and return to work. (There was in our pharmacopeia a great drug, called Parafon Forte. I don't know if it's still around or not. It was supposed to be an analgesic, touted in particular for back pain. It was my distinct impression that it was no more effective than aspirin, maybe less. But it was HUGE! And HEXAGONAL! And GREEN! Give a guy a horse-pill like that, and he just knew it was a killer drug; gonna work like a charm. I'd write for a few and add "NO REFILL" in big letters on the prescription. I wasn't above snake oil when it was called for.)

So it happened that among the ebb and flow of unhappy guys in various states of depression, I encountered one who was borderline de-compensating. I decided I needed help, and tried to contact a military psychiatrist in Saigon. It took about three days of calling, leaving messages, radioing, and cursing. Finally I caught up to the man. "Look," he said. "I'm the only military shrink in all of Southeast Asia. I can't deal with guys who are depressed or neurotic, or I'd be swamped. If he's not out-and-out psychotic, you're just gonna have to figure it out yourself." Click.

Well, I thought, I suppose that's reasonable. Poor guy must be overwhelmed, alone as he is; although it did occur to me that Saigon was pretty plush duty. I'd been there. It's a beautiful city, with canals, classic Asian architecture, and at that time was perfectly safe and quiet. Buzzing with commerce, women in traditional garb, men zipping around on scooters, smells of food, noisy markets. No rockets, no sappers (individual sneak attackers -- we had a few). And between drinks and girlfriends, GIs assigned to Saigon picked up the same combat pay that the rest of us did. But heck, he was alone in theater. Whacha gonna do?

I can't recall what exactly I did, but somehow or other I managed my patient and got him back to duty. Time passed. GIs trooped in and out of my office, rockets landed at night, life went on. And then one day I was made aware of a man who'd had a bona fide psychotic episode, and who remained fully delusional and unfit for duty. I gave him a bed and a guard, and began the frustrating process of tracking down the Shrink of Saigon. Messages left, calls placed and re-placed, swear-words issued profusely.

And after another three days or so, during which I worried that I had no idea how to manage the man beyond restraints and a few drugs, the doc got back to me. I described the situation. "Well," he said. "That man is psychotic. Nothing I can do for him here. Send him back to the States."
Posted by Sid Schwab at 8:15 AM

Great post, and a classic response from the Saigon shrink.

Funny! Passing the buck will always be one of medicine's most poipular games.

We really should have huge hexagonal green pills nowadays. I'm sure the shock value would be worth it!

Very interesting post--very ironic that he spoke out of both sides of his mouth!.

--very ironic that he spoke out of both sides of his mouth!.

From the web: CHLORZOXAZONE AND ACETAMINOPHEN
Some commonly used brand names are:
In Canada-
* Parafon Forte

Another commonly used name for this combination medicine is chlorzoxazone with APAP .

* Not commercially available in the U.S.
***
Chlorzoxazone and acetaminophen (klor-ZOX-a-zone and a-seat-a-MIN-oh-fen) combination medicine is used to help relax certain muscles in your body and relieve the pain and discomfort caused by strains, sprains, or other injuries to your muscles. However, this medicine does not take the place of rest, exercise or physical therapy, or other treatment that your doctor may recommend for your medical problem.

Chlorzoxazone acts in the central nervous system (CNS) to produce its muscle relaxant effects. Its actions in the CNS may also produce some of its side effects.

In Canada, this medicine is available without a prescription.