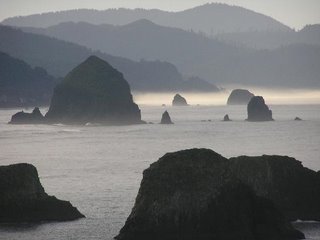 I'm blogging from the beach. Cannon Beach, Oregon, in particular, hitchhiking on wifi in a just-opened bakery/coffee shop, "Waves of Grain." My family has had a home here for several decades; my folks retired to that home about twenty years ago, after which my dad became mayor for a while. One of his crowning achievements was negotiating getting the cars off the beach. The local business folk feared that the attraction of being able to drive on the beach was what brought folks here. Hardly. It has become one of the best beaches in the world.

Not wanting to push my luck with the proprietors of the bakery, who offer free wifi with a purchase (how much is time is appropriate for good coffee and a tasty cinnamon roll?), I'm loath to spend the extra time needed to provide my usual litany of informative or witty or annoying links. I may not even get around to topics surgical today.

Before my parents bought this house, we came here every summer since I was a toddler, renting a house not far from the one we now own; so my roots here run deep. I feel core pleasure whenever we get back. When the tide is out, you can walk for endless miles on a wide and white sandy beach, and once you're a mile or so south of Haystack Rock, even in the height of the tourist season, you'll be amazed at how few people you see. Rocks (many of them huge monoliths several stories tall) scattered up and down the coast amongst the breakers at high tide with some stranded in the sand at low ebb provide caves and tide pools rife with life: anemones, sea stars, hermit crabs, krilly-fish. The baby gulls and puffins we saw last time we were here, huddling high and wind-blown along the tops of huge rock formations, are now mostly fledged and flying. Just when I'm warmed into the rhythm of walking and listening to the surf, my wife has to stop and check out the birds with her binocs. Or pick up the occasional perfect sand-nickel. The reach of the tidal flow between high and low is unique among the beaches I've seen -- California, Florida, Maine, Massachusetts, Hawaii. In six hours the tide line will have receded -- or encroached -- by a distance of a hundred yards; more in some places. Beware on your walks. If you go beyond any of the several points of land that scallop the shoreline, you may not be able to get back till the next tide.

In winter the sea is rough, the wind howls, and the beach is smaller and rockier. But it's worth bundling up and getting to the surfline. Marking a place on a rock formation (one has a hole in it the size of a basketball, with some lucky green and feathery anemones in it), you can see that the level of the entire beach -- miles of it -- rises and falls several feet in a year. In winter the hole is eye level. Today it's three inches above the sand.

The family home is right on the beach, on a low bluff just steps from the sand, about a mile and a half south of Haystack. The living room is graced by a stone fireplace, mantled with a huge piece of Douglas Fir, about six inches thick, bark outward, on top of which are a couple dozen wooden candlesticks of various twists and turns, all with partially burned candles, placed there over the years by my mom who by now is barely able to remember the place, much less make the trek to see it. Four little bedrooms upstairs, separated by thin walls comprised of a simple layer of wood slats, through the gaps in which my son and I used to pass notes when he was single-digits old, sleeping in the room next to ours. He triumphed over many of the rocks, scrambling up the steepest sides to sit on the tops, face into the wind and sea spray, years ago.

On my computer at home there's a photo of the weather vane out front; if it was on my laptop, I'd post it for you. Judy and I made it around thirty years ago, while I was still a surgical resident in San Francisco. It's taken glue and brackets to keep it intact against the sea weather all these years, but it still points into the wind. One end is a fanciful sun-shape with a face; the other is an arm and hand, finger pointing, carved after tracing around Judy's arm/hand/finger. She's held up pretty well, too. No brackets yet.

So the place is full of memories. We don't get here enough. And, in not too long, the fates have seen to it that we probably won't get here at all.
Posted by Sid Schwab at 7:32 AM

I love the beach--I grew up living right on the beach . . .people still drive on the beaches where I grew up. I love the sound of the waves crashing and the salt in the air . . .

Why won't you be able to go back (in the future)?

Dr. Schwab ... thank for this post. Your love for the area really came through. I was saddened by the last line, though ... I hope that fate wouldn't be so cruel as to take your beautiful place of refuge away from you.

I can relate to the warm undercurrent of what you were saying, because it feels a lot like what we feel for our little spot on the lake here in Maine.

What you mentioned about the tides made me think of Hopewell Rocks on the Bay of Fundy, in between New Brunswick and Nova Scotia ... the tide rises 46 feet! You have 15 minutes to get off the beach when you see it begin to come in ... and you'd be wise to do so. I've never seen anything quite like it anyplace else.

Dr. Schwab-
I went to Humbolt State University for a few years and my favorite OR beach was called Gold's Beach. I miss it. There is something larger than life about Oregon beaches. Something more primevil than those of southern Cali or Florida.

Plz post a pic. It sounds wonderful. I'm sorry to hear you may have to say a final goodbye to an old friend.

Wanted to let you know I have tagged you. Perfect timing, I hope; as you may possibly have taken some paper reads along for the trip?

I see Moof has already told you about the Hopewell rocks and the Bay of fundy which is in my neck of the woods.....a truly remarkable body of water and beaches that are home to many of the same creatures you mention in this post. It also covers and uncovers some of the richest fossil beds you'll find anywhere. A maritimer most of my life, I cannot fathom ever living away from an ocean - any ocean. Here in Nova Scotia we are always no more than an hour away from the Atlantic.
Your post has me craving the Pacific once again...but I will satisfy myself with a trip to a local beach this afternoon.
Shauna

I was at Cannon beach a month or so back. It was my first time in Oregon and I was amazed. Those large basaltic rocks sitting out in the ocean are just incredible.

I would love to see a pic of the Weather Vane