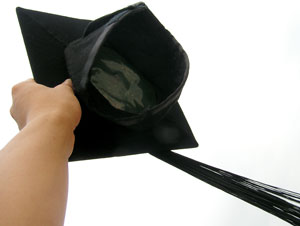 While gathering thoughts on my planned series on breast cancer, allow me a brief interlude. I had reason recently to recall something of interest:

My wife is the oldest of nine kids, and all her siblings live within shouting distance. As a result, I've been to many a graduation of many a niece or nephew. Always I find myself not particularly looking forward to them, and always they turn out to contain pleasant surprises. Since it involved graduation from U Dub (as we like to call it), a huge university, I was particularly not happy about going to see my niece graduate, a couple of years ago, with her degree in marine biology. To my great relief, her group had their own ceremony, in a friendly little auditorium. And the speaker turned out to be Jonathan Raban, a British writer now living here, who's written novels and non-fiction about the sea. In his buttery British voice, ennobled by the accent of the erudite, he gave a wonderful talk on mankind's relation to the sea, as manifested in literature; beginning with the myth of Narcissus falling in love with his reflection, and ending with (natch) Moby Dick, he delivered an enrapturing talk. I spoke with him afterward, which only added to the joy of the day.

More recently, we watched a nephew graduate from high school. The speaker was the district superintendent who, we all knew, had only recently recovered from life-threatening illness. He spoke candidly about it, in gripping prose, to a silent and barely breathing audience, telling us what he remembered, and what he'd been told. Suffering a perforated colon from diverticulitis (a condition with which, as a general surgeon, I'm all too familiar) he'd gone on to multisystem failure, was on a ventilator in intensive care for weeks, had been given last rites, and his family had been advised to collect anyone who'd want to arrive for their final goodbyes. He told us of vague memories of conversations around him, about sensing and trying to make peace with his imminent death. And he closed with this (more or less): "I've been through something I hope none of you will have to endure. I've seen life in its frailty and death in its inevitability. I've learned things about myself, and about life itself, and I'm in a unique position now -- for which I'm eternally grateful -- to pass a lesson on to a group of wonderful eighteen year olds as they approach adulthood. This I tell you from a perspective most will never have. If there's one thing I would have you know -- one thing I hope with all my heart that you'll carry with you through your lives -- it's this......... EAT LOTS OF FIBER! Good luck, and congratulations."
Posted by Sid Schwab at 7:59 AM

Ha! Words to live by!

On a related note, I never understood why people would complain about "passing a lot of gas." It certainly beats the alternative.

Your posts always have good "punch-lines" as scalpel says.

I was at a commencement speech given by Bill Clinton, and I too was surprised... that it was engaging and quite interesting.

Sometimes the biggest lessons are wrapped up in the smallest words. To echo the guy with the sharp knife in his hand, great punchline. And yet another good story.

It's what gives us the perspective on life (and death) that we have.