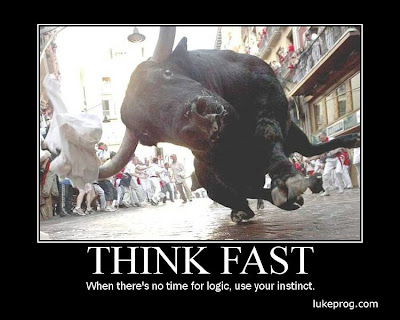 Not too long after setting up shop in this town, I shared a tough case with one of my favorite intensivists. (By way of diversion, I'll add there were only two of them at the time, and they were both my favorites. Practical and canny, surgical-patient-wise, they were a pleasure to work with. Over the years we developed great mutual respect and affection; to the extent that caring for critically ill and deeply challenging patients can be fun, it was.

It's unique to private practice, I think, that such relationships can be so positive and mutually supportive and satisfying. I know I have said that in the academic centers, there's too much turf war and defensiveness. Was, back in the day, anyway. The discovery of such collegiality was one of the pleasures of my entry into private practice.)

To make a long and dimming story short and bright, the patient was an older woman, admitted in extremis to the intensive care unit. Dying, evidently, of infection of indeterminate source. Clearly, she had severe pneumonia. Was there anything else? I was consulted early on, charged with ruling in or out a surgical and operable cause of her illness.

Without going into details (mostly because I can't remember them), I became convinced that the lady's decline was not due to any kind of "surgical" condition. I continued to follow her three or four times daily, during which time the intensivist in charge kept working me over: she's dying; at least have a look inside to see if there's anything fixable. For those unremembered reasons, I continued to resist. At some point it became moot. If I'd been wrong and she indeed had a surgically treatable condition, she'd ultimately descended beyond her ability to recover from whatever I might do.

Young, and not much established in the community, I didn't find it at all easy. The phrase lobbed to me more than a few times was, "It's time to fish or cut bait." I was well aware that if I was wrong it could be awful: for the patient, of course, but very likely for me, too.

Not a good enough reason. It's not unreasonable sometimes, when all else fails, to "have a look." Before the ready availability of quite accurate non-operative testing, such an undertaking (as it were) was not entirely rare. In this case, certain as I was, I simply didn't want to do it. Not absent from my thinking was the realization that if I did operate against my better judgment, and found nothing to fix, I would have become, in a very real sense, her executioner.

If anyone has the answer to such dilemmas -- which, I might say, we still face despite our imaging capabilities -- I'd be happy to hear it. Meanwhile, in the case at hand, the unfortunate lady died.

With more than a little dread, I awaited the autopsy findings, and came to have a look when it happened. (There's another subject: autopsies are done increasingly rarely nowadays. This case is an excellent example of why they are still needed.) I'm happy (if that's the right word) to report that it confirmed my conclusion that she did not have any pathological process going on in her belly.

There's really no lesson to the story, other than sort of confirming my belief that more mistakes are made in operating too hastily than in giving things time to sort out -- assuming there IS time. But the real point is that for the next twenty years of an extraordinarily productive and rewarding relationship between myself and the intensivist, the phrase fish or cut bait was used uncountable times. With varying meanings, depending on who said it, where, and why.

Been there, done that. I think that sometimes as a surgeon the hardest decision is the one to NOT operate.

A wise person (my department chair when I was a resident who has since died of metastatic melanoma) said "not everyone has to have an operation before they die".

This post seems to illustrate the importance of the cognitive aspects of surgery.

Is this what separates the average from the excellent surgeons?

PT: I don't know about that, but I do know that surgery is most definitely a cognitive process; which is why the discussion a few years back which differentiated the job of "procedurists" from "cognitive" work was pretty annoying. I wrote about that once, here.

Great post. I tell the residents that I can teach a monkey to operate. The decision making though, is what defines us. Once the patient is in the OR, it's usually not that hard to figure out what to do. Whether or not to go there is something that the new (and old) surgeon struggles with a lot. A pediatric surgeon told me when I was but a wee 4th year medical student, that he got almost as much joy from not operating as he did from operating. It took me a few years to understand what he meant. I fear that in this day, when even general surgeons feel that they need hospitalists to manage their inpatients, that we will be reduced to automatons that simply cut on the dotted line when commanded by an internist.

Sid, please forgive the impertinence but the numbers here are astounding. Please don't miss it.

What a relief that you were right about the old woman, I'm sure.

Sam: what's really astounding is the ease with which the right wing has convinced people that reform is unnecessary and evil. I wonder how many of the people currently disrupting health care town hall meeting will be without insurance in the next couple of years, or who have much less coverage than they think.

Appreciate your thoughtful comments; they will go far in educating those who haven't been there. At the risk of being brazenly self-promoting, I believe those who appreciate this blog also may enjoy www.tellitgood.blogspot.com.