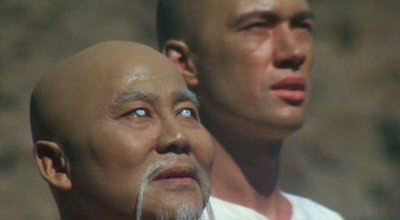 Somewhere in my home is a letter I received from a Shaolin priest, one of five (so I was told) grand masters of the martial art of kung fu on the planet. The letter is embossed with the gold seal of the temple of which he was the head honcho. With its beautiful calligraphy and that timeless seal, I've thought of having it framed.

The temple is in another country. The master came to me, that I -- and only I -- might operate upon him. (To put it a little more dramatically than circumstances might warrant.) According to the man who sent him, he taught only a select few, and demonstrated his skills only in private. The referring person, who had been a student of kung fu (but not of the master), described to me the man's ability to toss a group of attackers like fish, and other unearthly wonders. The priest was in his seventies.

I'm not sure what I expected. An aura? Rays of light? Surely, were I to give satisfactory care, I'd be granted some sort of special status, maybe presented with a holy relic, invited to the temple for a secret ceremony, rooted in ages past. I admit I let myself imagine special things.

He arrived in my office dressed like a Florida retiree. Looking age-appropriately fit, but neither athletic nor powerful, he was of no more than medium stature. Less surprised than embarrassed for my silliness, I immediately discarded my dream and proceeded into my usual doctor/patient partnership, treated him like everyone else, operated in due course, saw to his recovery, and he returned to his homeland.

The letter, which compared my art and skill favorably to his, arrived with a package. Really, the elegance of the letter was more than enough. Once again, I entertained a brief fantasy of what might be in the box. 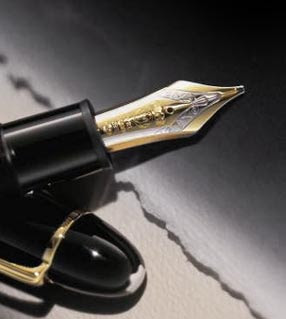 It was a Mont Blanc fountain pen.

I'm not sure I'd heard of them before that. Very expensive, for a pen. A nice gesture, no doubt, but of not much use to me. A little too showy, it was also impossible to use for writing orders at the hospital, because you need to push hard enough for several copies. Nor was I interested in lugging around a bottle of ink on rounds. I confess to being disappointed. It seemed so impractical, so materialistic, so... unlike a Shaolin priest. Not that I had any information other than a TV show.

In its elegant box, the pen sat on my bedside table for a decade or so, along with its exotic ink bottle. Then I wrote a book, got it published, gave a few readings, did some book signings. Wow, it eventually occurred to me. It's karma, or whatever Shaolin priest kung fu masters believe in. He forsaw it, it was perfect, meaning revealed. I took it to the next signing. With its elegant gold nib, its meaty heft, its characteristic emblem, the soft lines of ink it imparted to the page, perfect for a signature and a few well-chosen words. The mark of a writer of distinction.

After reading from and commenting on the book (I will humbly say my readings were always a hit: I'm enough of a ham to enjoy it and get plenty of laughs -- the first time I did one, it was at a fairly fancy book fair in Portland, called "Wordstock." My reading, in a small room, was at the same time as Gore Vidal's, in a much larger one. "This is my first reading of my first book," I told the audience. "So I'm really looking forward to hearing what I have to say.") I sat at a table and proceeded to sign books for people, bringing out the newly-glorious pen, studiously acting as if it were as normal as breathing.

It leaked all over my hands, and wildly smudged the first book I signed.
Posted by Sid Schwab at 1:51 AM

That's the kind of stuff I like reading from you Sid. Very nice, indeed! I need a super simple operation done you could truly knock out in five minutes in your dining room. I need a carpal tunnel release. Can I email you? I promise to ring a cool gift.

Can You think of a more useless gift for a doctor than a PEN??? Its been 25 years since I've written with anything that didn't have a prescription medication emblazened on it...
Probably stiffed you on the tip to, but when you die you'll get Total Consciousness, which is NICE...

Mike: feel free to email. The link is at the "see my full profile" page.

Bongi: That's too clever for me. Explain.

Frank: For a surgeon, total consciousness is a relative thing. Being able to read would be good.

I once dug ear wax out of the ear of a visiting tenth-degree black belt from Okinawa (my teacher's teacher). Similarly mundane.

But he "repaid" me in class by showing me some special new techniques, by which I mean he demonstrated them on me and also taught me some new ways in which I could experience pain...

I just have to say that I believe in karma (as much as someone like me can). I also want to say that I read your book (I was intrigued by your blog entries at a time in my life when I was considering medical school) and I loved it.

May many more publications be in your future!

Amazing story! I read it to my husband a few minutes ago. He said, "That just proves what I always say. Nothing lasts forever!"

You realize that you could have the ink bladder replaced on your Mont Blanc pen should you wish to improve your karma! There are people who love these items which most of us feel have outlived their usefulness. The things that people collect always amaze me. Some of these items come up on the PBS program "Antiques Roadshow" and the prices they quote usually amaze me!

I sold a couple of attractive Shaeffer ink pens to someone who collected them at a local pawn shop. I think I got $20.00 for them both.

I still have two Cross pens from the Rhode Island manufacturer (one silver, one gold). I received the silver one as a prize. I spent almost a decade as the Boston representative for Bristol-Myers Squibb's Clairol Professional Products Division. The silver one says "G.S." for "good salesperson" -- with my initials. Our district manager wasn't very imaginative, but I did use both pens at one time or another in my life.

I have no idea where the gold pen came from, and now, I have inherited a Cross set in black onyx finish. One is a pen and the other is a pencil. They originally belonged to my husband.

I've been driving around with them in my car trying to decide what to do with them. I'll probably consign them at some resale shop to look for a buyer.

Re: ink everywhere... Open the pen with one hand, nib up (see the picture in this Fountain Pen FAQ.)

Using one hand limits the travel of the cap to that of your thumb from the "closed" to the "open" position. The vacuum action of the cap coming off in the typical, two-handed opening motion is stronger than the one-handed method, because of the order of magnitude difference between methods in the acceleration, and speed, and travel distance of the cap.

The two-handed method's momentary vacuum is strong enough to draw ink out of the nib and into the cap. On re-capping the pen, the ink transfers to the barrel. The next time you use the pen... ink all over your fingers.

That same vacuum action can, depending on the viscosity of the ink, overload the nib with an initial blob of ink that bleeds onto the writing surface on first contact.

I guess I'm saying that the one-handed method sucks less than the two-handed...

Also, since you're a writer, consider using your pen for focused writing sessions. I find that using a fountain pen encourages me to slow down and write with conscious, deliberate focus. Over time, the pen fades away, but the consciousness and focus remain. I like to think it improves my writing, but even if it doesn't, the experience itself is rewarding.

I feel like there should have been a dubbed English voiceover during your conversation! I used to watch Kung Fu Theater with my grandfather on his "cable tv" back in the early 80's. You have every reason be proud of this noble encounter :)

I think you should frame it as it sounds unique and arty and would be an interesting conversation piece.

I was thinking and elegant pen for an eloquent writer.

(i've always dreamed of having a monte blanc fountain pen... the closest i've gotten was a mb roller ball... it's beautiful, but ungrateful me always looks at it and thinks, "i wish you were a fountain pen.")

It's a beautiful object, all right. If a little less than perfectly functional, in my case.