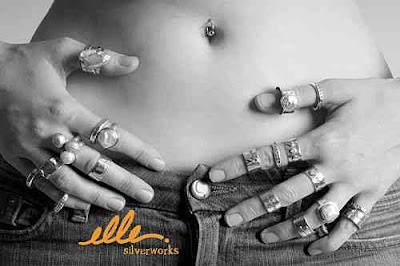 When I was a med student on my first surgery rotation, I was taken with the coolness of how the surgeons tied all manner of baubles into the drawstrings of their scrub pants. Rings, watches, bracelets. It just screamed "I'm a surgeon, and you're not." So I did the same thing. And carried it on, halfway through my career. It's one of those things surgeons do, like carrying a stethoscope in their pocket rather than around the neck. Pockets populate scrubs like rabbit holes: for one thing, the outfits are generally reversible, with the same pocket pattern inside as outside; for another, many styles of shirts have not only the usual breast pockets, but at least a couple extras at the lower hemline. Storage? We got it everywhere. But you tie stuff into the drawstrings, because that's what you do. Maybe it's to draw attention to one's genitals: shiny things -- in our genes it is written to turn our eyes toward them.

In our fourth year of med school, one of my pals was on his obstetrics rotation. Called to the ER to evaluate a woman with some problem or other, he left her up in those medieval stirrups while waiting for the resident to come and check his findings. Restive and bored, standing there between the lady's knees with time (and lube?) on his hands, he chose that moment to put his ring and watch back on. As he distractedly began untying his drawstrings he happened to cross eyebeams with his patient, and noticed she was recoiling in dread as she witnessed a man apparently untying himself while well within her personal space. "Oh no, no, no," he said, "I'm sorry, it's not...I was just, y'know, putting on my... I'm not..." But there was no recovery.

Without any deep thought (not a huge priority, this), somewhere along the line, a few years ago, I stopped tying up my bling. It's such a cliche´really. Have all those pockets: why not use 'em. Which was fine until, in the wee hours of a long late night, with bleariness aforethought I tossed my scrub shirt -- wedding ring in the pocket -- into the laundry bin after surgery and staggered home. By the time I got there, realized it, and called the OR to request they "hold the bag," it had already been taken away by the housekeeping staff. Calls to every responsible place failed to stop the inevitable: it was never seen again, at least not by me. It wasn't particularly fancy, but I'd designed it and a matching one for my wife; had 'em made...

Dr Sid, I can see the first story happening. Embarassing, but funny!

I tend to safety pin my wedding ring(simple gold band)to my watch and then place them in my hip pocket. I have almost thrown them in the laundry many times. Harder for me to forget when it's both of them.

I can just see the whole scenario now (funny) Imagine if the fellow dropped the trinket, we all know when something is dropped it can never be found there and then - and heaven forbid if it was of sentimental value, then only god knows that every nook and cranny would have to be looked into.

Oh goodness. So, does your blog audience get to see a picture of your wife's so we can admire what you designed?

My husband does not wear his ring at the hospital. I told him not to wear it (fear of losing it) or tie it onto his pants. Something about a wedding band hanging down at your genitals just does not look very professional to me.

After some nurse thought he was not married and hit on him while I was standing there I told him maybe a tatoo would be good.

Loved the story. I have to remember to tell the hubby that one. During the exam my OB and hubby started having a casual conversation. My OB stopped the exam (with his hand still you know where) and starts into great detail about something. My husband joins in. It was like they forget I was there. I said, "hello, I'm here. Can we get this over with? Then you guys can chat."

Been there -- tossed my ring (and found it). Now it goes on my scrubs draw sting every time. When I'm asked what I'm doing....
"this way I can never take off my pants without remembering I'm married" :-) www.waittimes.blogspot.com

I put my wedding bands on my name badge - they snap on and off easily. Plus I don't have to worry about losing them in the laundry.

I keep my rings in my wallet, which I keep in the "thigh" pocket on my pants. It's not in thw way when doing anything and it's big enough to not forget. Or I keep it in the locker, and I have my locker key safety pinned to my scrub shirt. That said, I've lost a ring the same way, too. Not a wedding ring, mind you.

A few years ago, a friend was untying his scrubs in the OR locker room and his ring fell to the floor and rolled into the space far under the lockers. Not to be deterred, he grabbed a light source and a bronchoscope and tried to retrieve the ring using a biopsy forcep through the working channel. He couldn’t reach the ring, but he did manage to break the scope in the process.

He eventually fished out the ring using a yardstick...the technique he should have employed in the first place. He kept his ring in his wallet after that.

Great scenario with the stirrups. Horrifying and funny. :)

I am so sorry about your wedding ring. Did you or could you redesign it?

OMGosh! THAT story is exquisitely funny!!!! hahaha! Their faces must've been priceless. :)

I like what you said about taking your pants off Ian.

I did not expect a story like that from the somewhat stoic Dr. Schwab. I have to say - that was hilarious. Perhaps someday I will have some stories of my own. . .

Back in the days I wore scrubs and jewelry (no longer do either...out of clinical practice and nickel allergies are a pain...) I used to pin my rings onto my scrub top into my bra strap. I started doing that after a coworker, who simply pinned them to the top, took her top off at the end of the shift and tossed it, with the rings, into the laundry chute. She was fortunate enough to get them back. Another coworker lost hers.

One of our male docs tied his ring onto the pant drawstring, in a knot, then tied the pants. One day he untied the pants but forgot to untie the knotted string with the ring...bye bye ring. Never got his back, either.

ok, I don't believe in god or the church and neither did my husband. He lost his wedding band twice. I had made it for him. I made him say a prayer to st. Anthony. He made fun of me for it. It worked. It's worth a shot.

One evening at 2am while on call during my surgery rotation, I got paged to go help a resident do something. I had only had one hour of sleep from the last case (a long emergency bowel resection) I got up, answered the page, and went to go take a leak before heading out the call room. I'm still groggy and about midstream I hear "chink-chink-clunk." Look down to find my wedding ring sitting in the base of the toliet. I forgot to put my ring back on after the case. Well, it took a few minutes to process this. I decided to reach down in warm, bubbly urine and just grab it. I just decided to laugh it off, and spent the next 5 minutes washing my hands. I met up with my resident, who asked where the hell I was, so I told him my story. Fortunatly, he thought is was hilarous.

My wedding ring was lost during intern year at SFGH...safely tied to scrubs at one point, gone the next. Never found. Now I only wear my rings on social occasions.

I keep my ring in the front pocket. Tossed it into the hospital laundry twice, but was able to retrieve it. Now it's the first thing I reach for once the gown/gloves come off.

Hi, I'm hoping to get some feedback on my note here. I am working with a girl who is a massage therapist. She asked me to develop a thing to put her ring on when she is giving massages. We also figured this "thing" could be useful for any person who has to remove a ring during medical procedures. I have an acquaintance who was a surgeon and he related how he lost 2 wedding rings because he set his rings down while scrubbing up.
So now I have samples and wanted to know if anyone out there wanted to try one of these so we could get some feedback. May I give out my contact information so I can send these out? Thank you!
Rich

I don't ordinarily let this be a place for ads, but curiosity gets the better of me; plus, it wouldn't really be an ad. So, go for it. I'd say, though, that there are lots of simple solutions out there: some people use a safety pin. Some use a chain and hang the ring around their neck. Like Elvis.