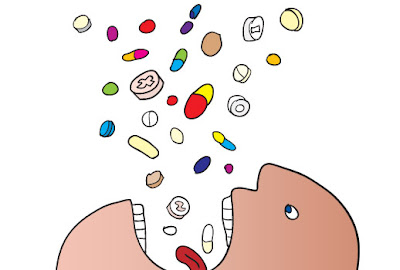 Comes word of a recent study of the placebo effect: you get what you pay for. In the recent Journal of the American Medical Association, it's reported that when people are given two placebo pills for pain, the more expensive one is the more effective. From a summary in the NY Times:

"The investigators had 82 men and women rate the pain caused by electric shocks applied to their wrist, before and after taking a pill. Half the participants had read that the pill, described as a newly approved prescription pain reliever, was regularly priced at $2.50 per dose. The other half read that it had been discounted to 10 cents. In fact, both were dummy pills. The pills had a strong placebo effect in both groups. But 85 percent of those using the expensive pills reported significant pain relief, compared with 61 percent on the cheaper pills. The investigators corrected for each person’s individual level of pain tolerance.

From another report on the study, on the WSJ Health Blog:

"The better showing by the more costly pill shows that “how you set up people’s expectation is crucial” to treatment effect, says Gregory Berns, a neuroscientist at Emory University School of Medicine. While he has no proof, Berns tells the Health Blog that he thinks pharmaceutical companies take such expectation into account when they set prices for their medicines."

When the issues are such things as pain or coping with chronic disease, expectation + therapy = outcome. And expectations are heavily weighted by various preconceptions. In the military I happily handed out a big honkin' green and octagonal pill for back pain. I'm sure it was no more effective than aspirin; but when people took a look at those things, they had to figure it was the real deal. It also helped, I think, that I wrote "NO REFILL!!" on the prescription and underlined it a couple of times. As interesting as it is, it's also a little sad to realize how easily manipulable our brains are. (Which, it must be said in these political times, applies way beyond the medical...)

Consciously or not, I think all physicians make use of these para-placebo effects -- maybe, in fact, we should do so more. After all, it's clearly what gives "alternative" and "complementary" mumbo their jumbo. Make a few bucks wherever you can find them. And if it improves response, better still.
at March 05, 2008

That's part of the "art" of medicine.

I read somewhere recently (can't recall where) that some patients done think generics work as well as non-generics. Once again the cost thing. Since they don't cost as much, they can't be as good.

It works for almost anything - alcohol, jewelry, education, clothes. . .you get what you pay for is not always the case.

This study makes me feel smarter for always choosing the most expensive homeopathic remedies. The cheap ones never work.

I'll be here through Thursday night...

But, RLBates, my daughter is treated for seizure disorder with Lamictal, and the neurolotigist explained that the variances in the pschoactive agents vary too wildly among the generics of lamotregene (sp?) that he can't prescribe them. He made the same case about generics of other psychoactives. The risk is that too high of a does is dangerous and can cause serious neural problems, while too low of a dose is ineffective.

When there are drugs with narrow effective ranges, the perception that generics aren't as good has some truth to it.

The other type of drug that makes me worry is in generic antibiotics, and whether a reduced effectivity would lead to the evoluiton of even more resistant strains of say, streptococcus.

I am not a shill for the pharmaceuticals, but I am saying that doctors should be cognizant of both cost and effectiveness, and communicate those issues to the patient in case they need to fight with the insurance carrier.

Finally, with generics, patients don't know who the manufacturers are, and the makers of generics, while being known to the pharmacist and to the FDA aren't known to the public and it adds to the whole "buyer beware" problem.

Well, placebos are great (and appropriate) for mind-mediated issues like pain. Not so great for appendicitis. When the mumbo jumbo tendrils reach into the clinical pathology box, it's time to get out the scalpels and start cutting out the crap!

Anyway, I've used this concept to make sure my son takes his ADD medication. "These pills cost a lot of money apiece, so be sure we're getting our money's worth."

Unfortunately, he's just entered the eye-rolling stage that sort of deflates any parental arguments for anything.

I'm wondering if the placebos "work" like the real deal because, in the mind of the patient, they have to. There may be no other options. Especially if a person is low-income, sick of being passed around from one Dr. to another, tired of the pain, etc. Dr. Schwab's success with the double underline on "no refill" for the hurky green aspirins sort of corroborates this. Sort of.

Also, with the placebo studies, but it'd be interesting to compare short term feedback with a year down the road... Perhaps self-delusion has an expiration date.(Tempting to link this back to one of the weekend rants here, but I'll resist.)

After all, it's clearly what gives "alternative" and "complementary" mumbo their jumbo.

I think you'd get along swimmingly with Ben Goldacre of badscience.net

He's very keen of finding an ethical way of administering placebo. Get the jumbo without the mumbo, I s'pose.