Where You Find It 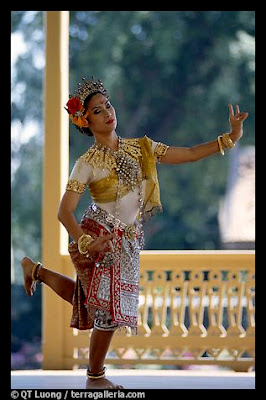 Enlarging on a footnote in my book, I share the story of a magical picnic:

Toward the end of my year in Vietnam, as the North Vietnamese Army marched ever more successfully downhill toward Danang, we had to bug out to Thailand. We shuttled to a barely re-opened base at which our "hospital" consisted at first of cots and bare walls, and where my office was furnished with boxes. My arrival was met with delight by a fully-trained surgeon who had not been allowed to leave until I (having had only a surgical internship's worth of training) got there. When he left, the portable OR and the anesthetist went with him: such was the logic of the military.

There was a small town nearby, which grew rapidly, putting up bars and other establishments more quickly than we fixed up our facilities. One of my fellow docs found himself a Thai girlfriend, with whom he moved in, part-time at least, downtown and in short order. My friend thought her an amazing young woman, and wanted me to meet her. The first visit was to her (their) little hut near town, where she made us a memorable meal. On a little cookstove, while telling us the story of her life (another time, maybe) she whipped up some stir-fry, leaving out the hot sauce which she reserved for herself, saying the stuff she made us was so mild she could barely taste it. My lips and tongue burned for a week.

Several days later, she took us on a picnic. Riding in the back of a tiny pickup truck she'd hired, we bounced our way through the countryside, eventually pulling up to a marble stairway which led partway up an abruptly rising mountainette. 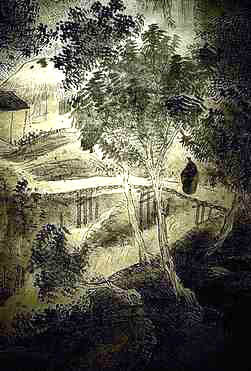 Yes, a marble stairway in the middle of nowhere, up which we lugged the bounty she'd brought: a hibachi, bags of fruits and meats and breads. And other material of a horticultural nature.

At the top of the stairs was a monastery. Shaved-head men in citrus robes took no note as we followed Banjit down a path and into a cave, at the back of which was a dark wooden platform with airily carved sides, supporting several statues of the Buddha, incense, and a monk in prayer. Behind it was a handmade ladder, rungs tied with rough cords, up which we climbed through a hole at the top of the cave, handing our bags up to one another, coming out to find another path, seemingly leading to a different planet. On the truck we'd traveled through flatlands, rice paddies, all horizon and open space. Now we were in a green grotto, rocky and steep, softened by banana trees, huge ferns and palms. The air was hot and humid, smelled like a prom corsage. We sat on chunky rocks, looking down on the monastery and up at cliffs, while Banjit fired up the hibachi and handed out the previously-referenced, subtly-mentioned, vegetable-based, mood-enhancers. Not that the mood needed enhancing.

There was papaya, banana, and the most honey-succulent pineapple I've ever tasted. She cooked satay, passed around mango juice, and we lay back on the rocks and took it all in. As much as we could. Then, Banjit climbed a tree and began shaking its limbs and chanting.

"How you know monkey come?"

"You be here before?"

They came. Small, grayish, timid, a group of maybe ten or twelve monkeys appeared out of the undergrowth, looking wary, as if worried why they'd been summoned. We tossed pieces of fruit their way. Never taking their nervous eyes off us, they reached suspiciously, clearly not tame like park-squirrels, grabbing morsels and retreating to eat them, entirely, with care, licking their fingers when finished. Ants, I was thinking. I've been on picnics with ants, but this... Banjit stayed in the tree, laughing. It was beyond ecstasy. 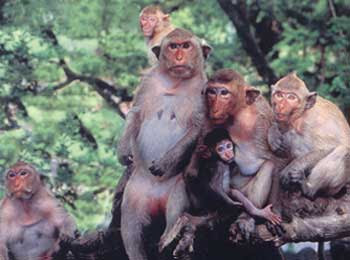 Suddenly the monkeys scattered in fear, as if a shot had been fired, eyes directed up the mountain. Down strode who could only have been the king monkey, half again as tall, walking on hind legs intently, commandingly, boom, boom, boom, hands fisted. His testes looked as big as the other monkey's heads. Drilling us in our eyes with his, he grabbed up a slice of papaya, chomped off a bite or two, and tossed it away. Then another, the same way. No nibbler; not this primal padrone. He glared at us as if to say, "That's all you got?" then spun around and marched back whence he came, and, as his remarkable presence ebbed, slow, like a setting sun, returning the place to us, the monkey-flock reappeared, gingerly taking up his leftovers, picking them clean.

Banjit spoke from the tree.

There. Evolution. Obvious to anyone with eyes open, in the jungle, sitting in a tree.

Oh, and what of the place where this magic occurs? As happens in Southeast Asia, the sky darkened before we knew it, and when we did, we saw a monsoon on its way. Grabbing what we could while Banjit called, "Go now, go now," we couldn't get everything together even though there was now less of it.

I thought political posts were for weekends?

;) Thanks for sharing I (almost) went to Thailand, bt ended up in central america instead. It's still high my list though . . . as soon as I can afford those tix.

Hey, it was just a good story. Plus, it did, if tangentially, have to do with my medical experience.

I think it's still pretty amazing, although Bankok is now really polluted, so I hear. Still worth seeing, with fabulous temples, markets, waterways (klongs.) And just to show they live in a wonderful world they keep from us, we call it Bangkok, they call it Krong Tep.

Ummm . . . my comment makes more sense if I say what I meant to which was, "I almost went to Thailand both last winter and this winter, but both times I ended up in Central America instead . . . "

I have a dear friend who spent winter '06-07 in Thailand at "the islands'"(?) where she used the time to, in her own words, "lay on the beach for four months and not move a muscle except to order another f**ing drink!"

Where did I go wrong?

Lovely story on many fronts. Evolution :)
Finding good in the mist of bad
Being young, picnics, etc

Dr. Schwab,
How visual, I felt like I was there! Such peace, you describe, in the midst of what was surely such horror (war).

I kind of have a "thing" about weary travelers, especially the ones on Thai elephant safaris.

But you are safely immune from my arguments and love that you are able to share this virtual vacation.

Love that... "horticultural nature". You continue to amaze me with how human surgeons are (oddly said, I know, but somehow, somewhere, the impression was made).