How I Spent My Day 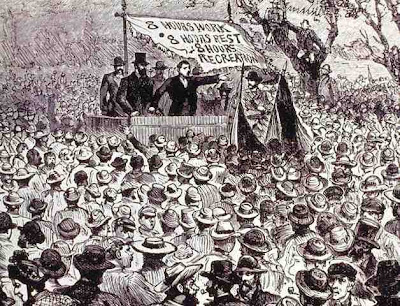 I went to an Obamarama today: he spoke in Seattle, at Key Arena, which is where concerts are held and where the Sonics play. Yesterday Hillary spoke to about five thousand people. Today when we arrived the line stretched for countless blocks; holding seventeen thousand, the place was filled and doors were closed while thousands of us remained in line. The media said it was three thousand who stayed to hear the speeches piped out to us; it looked like more, and it was after thousands left as soon as the news came that the place was full (it was cold and windy and a little rainy.)

Obama arrived after quite a wait, but when he did, he stopped before going in and addressed us lockedoutenfolk, which was thoughtful. In his speech he said all the things a candidate for whom I'd vote would have needed to say, and many others. It was worth the wait, even if I received some negative feedback from my bladder.

But here's the kicker: I'd been contacted recently by the woman who runs Washington Veterans for Obama. Turns out her father was in the Air Force in Vietnam at the same time I was, and was shot down, survived in the jungle and maintained radio contact for eleven days before he went silent, never to be heard from again. I remember hearing about it while I was there: we were waiting for word and possible rescue, but it never happened. She said they wanted some veterans on stage today, behind the Senator, and to call her when I was there; she might make it happen. So when we arrived I called her cellphone, but was only able to leave a message. I checked my phone a while later, and there was a voice mail: she had a VIP ticket waiting for me; I should leave the line and go right to the entrance.

By the time I got the message, it was too late.

Awww, it's okay. If you felt self-conscious about your recent nearly flawless broadcast performance, you would have felt REALLY terrible about crossing your legs, grabbing your crotch with both hands and rocking back and forth as your bladder delivered you "negative feedback" -- all on television!

I think that's actually a scene from Forest Gump II.

Indeed! Traffic on I-5 around Seattle Center was sluggish with a long queue of cars exiting towards the Space Needle...

... so say the people who could not escape the medical institution to see Obama speak. ;)

not that i have any vested interest in who becomes the next american president (unless of course another bush does and decides south african has weapons of mass destruction) but i must say i like the african connection of your candidate.

Dr. Schwab,
Great story, and great picture:)! When I saw him speak several months ago, before Obamamania had really taken flight, I felt so shaky that I could barely walk afterward. He's so effective and inspirational!

Either Barack, Michelle, or someone on the campaign sends me email every day. It's very intimate, what's going on over there, seriously.

Awww...Sid ...I feel your pain. maybe next time. Glad you got to hear him directly though. Must've been awesome.

My bladder would've assaulted me if i tried to stay there that long! ;)