Check this out, then we'll talk:


OK. Aside from the fact that W.C. Fields was one of the funniest physical comedians we've had, there's a serious point to be made: laparoscopic surgery does not come naturally to everyone.

[Aside: in college I put on a W.C. Fields film fest as a fund raiser. His stuff is timeless; his short films are classic. I've repeated the "Honest John" story, and demonstrated with a pool cue, off and on for the last forty years. If you can find "The Barbershop" (or is it "The Barber"?), watch it, although it could ruin your concept of shaving and of puppy-dogs forever. And, of course, in addition to the physical comedy, Bill left behind some of the best lines ever uttered...]

Watching the ol' curmudgeon's struggles to control his pool cue is an exact replication of observing (some) neophytes in their first attempts at laparoscopy. Newly-minted surgeons have had the advantage of training in laparoscopy over time, in labs. Perhaps more importantly, they grew up playing video games, which really do prepare one's brain for making the wiring changes needed to accomplish a three-dimensional operation while observing on a two-dimensional screen. Old as I am, I was well into my surgical life, three dimensions to the wind, when laparoscopy came on the scene. So I had to take a couple of crash courses. I found, I'm happy to say, the transition both easy (compared to some, that is: it does take time to gain fluidity) and fun. I was NOT one who was waving instruments around like a Fieldsian pool cue. (In other words, the reasons I continued doing my mini-gallbladder operation were unrelated to skill, but to practicality.) To the extent that I'm still doing surgery (I've semi-retired into assisting, of late) it's only of the laparoscopic kind, and I like it.

The process is an interesting one. I think that getting good at laparoscopy is a matter of learning to read motion digitally, to break down tiny quanta of visual cues as they happen. Instead of watching the sweep of actions, you get to a point where, unconsciously, you discern depth by reading increments of changing relationships; it's a sort of visual echolocation. Like this: if you took a series of pictures of your finger as it moved toward you, and then looked at them one at a time, you'd have -- while looking at any one -- no sense of motion. But if you looked at them in order, you'd be able to tell the direction the finger was moving, by its size relative to the other things in the picture. In one sequence, it'd be moving toward you; in reverse order, it'd be moving away. So when doing laparoscopic surgery, you are constantly processing the changing screen-size of the instruments you are using, relative to the organs and structures surrounding them. Your brain translates it into real-time 3-D. Neat! Based on observations of my fellow course-takers, I'd say that ability is not equally distributed among us.

Technology marches on. It should surprise no one that 3-D video has come to the operating room. I hate it. 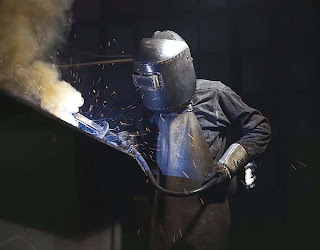 Wearing a helmet containing a separate small video screen in front of each eye, you form a 3-D image from a scope with two parallel and slightly off-set lenses. The biggest problem is that the lenses are, necessarily, not far apart; so unlike what we see with our comparatively wide-set eyes, the sense of depth is pretty minimal. And strangely -- at least for me -- there's something slightly disorienting, or at minimum disquieting, about having the same image in front of you no matter where you move your head. Ain't natcherel. Finally -- and I suppose I could have it better adjusted -- the strap holding the apparatus in place gives me a damn headache. Unpleasant, unhelpful: without doubt, it adds up to a negative number. The equipment used to reside in the room in which I work. Haven't seen it in several months.
Posted by Sid Schwab at 7:30 AM

Thanks for the "Honest John" video! I really enjoyed the laugh.

and it's a great way to explain how laproscopic surgery can be disorienting.

Help is on the way...
http://www.inition.co.uk/inition/product.php?URL_=product_stereovis_x3d&SubCatID_=1

AutoStereoscopic LCD displays (3D w/ no glasses) are getting better and better. I've not seen these used for surgery though. One hitch is that you need to give up resolution to get stereo and that's not a trade-off most people make lightly. Another requirement is that you've typically got to be looking at the screen at the appropriate "straight-on" angle to get a good 3D effect. And of course you're putting two little cameras down there instead of one, and it's a more complex system... and complexity makes systems fragile. Simple is good.

Dr S, have you ever played Trauma centre on Nintendo Wii? I think you'd like it...

The literature on 3-D displays pretty much describes the exact same effect you did: 3-D + head movement = disorientation. That's why 3-D displays have been successful only in robotic surgery - the head is kept motionless, thus preventing this effect.

i have never heard of these 3d things you speak of. i learned my laparoscopic stuff from a master of the art in pretoria. he creates a 3d image, i think without even knowing it, by using the same principle an owl uses when it moves it's head from side to side. he has used the same camera operators from the early 1980's when he started lap stuff. they grew in it together and almost function as a unit. the point is, against conventional teaching, his camera is almost never stationary. it is constantly looking from a new depth or angle. with practice, the brain can translate this into 3d. i have been working on this myself, but it takes incredible communication between the surgeon and camera man.