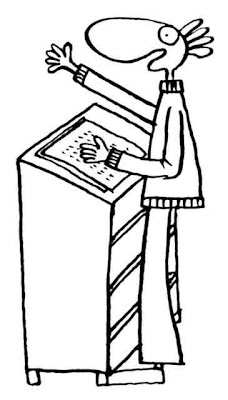 I'm about to do a reading of my book, which I haven't done for nearly a year. Having looked it over for the first in a long time, I find these paragraphs from the "afterword" relevant to my recent post about student blogs, and the comments that resulted. So, for those of you who haven't read THE BOOK (I find it all but unthinkable), I re-print them here:

"When I left Judy at Travis Air Force Base and headed off to Vietnam, I surprised myself by sobbing like I’d never stop. Three decades later, I’m glad I went. It was the seminal event of my generation; I know it from a perspective held by few of my friends. The analogy to surgical training is imperfect; I chose to be a surgeon, and didn’t cry on my way to San Francisco. But it was a tough slog, through a system set up by people over whom I had no control, and with whose conduct within that system I didn’t always agree. Nevertheless, I was among the last participants in an era now over for good. I felt part of an unbroken chain of teachers and learners tempered in that same cauldron, walking through the same halls, awake through the same nights, going back for much more than a century. Across the country, the old county hospitals are gone, and the residents are getting a little sleep. I won’t argue that it was better then; in fact, it probably wasn’t. But my training, which informed the lives of generations of surgeons, in many ways brutal and inhumane, is an experience I feel privileged to have had before it disappeared forever.

I wonder if Dr. Dunphy and his WW II buddies, and those before them, actually had thought it out like this, as they fashioned the modern rules of training surgeons: beat them down, overwork them, hold back the rewards, so that only those who really love it, who find being a surgeon irresistible—like surrendering to a disease—will push on into the senior years of residency. If people burn up and drop out, good riddance. Take their mistakes and wave them like semaphores, visible for miles. There are no brighter lights than those in an operating room. You’d better get used to it, because there’s no separating from the pleasure of dramatic success the misery of abject failure.

Fear of failure is the surgeon’s safety net, and his dead weight. If you haven’t had driven into your essence the sweaty recognition that failure is just around the corner, you ought never pick up a knife. But if you aren’t the kind to overlook that fear and plow ahead believing you’re prepared, you’ll never get out of bed in the morning, much less in the middle of the night."

It goes on from there, in other directions, and perhaps a little too long. But the above is a good crystalization of my thoughts about the inherent (and, to a significant extent, disappearing) toughness of surgical training. For what it's worth. Nor do I mean to belabor the point. I just came across the words again and found them relevant to the recent post. In addition to which, as readers will see, I'm running low on ideas...

Oh, and the book is a lot funnier than those paragraphs suggest. And entertaining.
Posted by Sid Schwab at 7:01 PM

I thoroughly enjoyed reading your book which I purchased last fall after discovering your blog. I had brought it to my urologist's office as well as SDS when I was to have the last stent placed in me. Ha! The nurse was shocked that I would be reading your book before going in to the OR. Wasn't any problem for me - as I already stated - I enjoyed it. :)

Where is the pic you had on your blog header? I liked it. :)

If you mean what is it a picture of, it's the view from my front porch. If you meant where did it go, it should still be there. It is on my screen.

Or, it occurs to me, you might refer to the smaller picture on the right hand column. It was also a view from here, but I removed it when I added the bigger one to the top header...

No Dr S.-it's not there and I have been visiting you quite a bit today/tonight. Maybe my system?

I figured it was one of your views. So beautiful!

Hey Dr Schwab, where & when is your reading? I'm up in your part of the woods (well, close) and might like to make it. 80 hour workweek and all that.

The reading is Monday October 8th at the Everett Symphony on 2710 Colby at 1 P.M. The audience is the general meeting of the Everett Women's Bookclub. I'm not sure how public it is, but I assume if a person were to say s/he was invited by me it'd be no problem. My wife is bringing an "outsider." It's the umbrella group for many many smaller groups, so I don't know how many will attend but I'm certain no person knows everyone in all the smaller groups...

Wow, what a view from your front porch! After reading Seaspray's comment, went and had a look - yes, it is there on the top header.

Gee...it is now 8:33 Sunday morning 9different day) and there is still no pic on your header. I see the title and other words but not that beautiful pic. ??? Must be MY computer?

Dr Sid, would love to hear you do a reading, but alas too far away. How about having your wife video part (or all) of it for us and posting the video on your blog?

ramona: that's an intriguing idea... I might try to scrounge a digital video recorder and then to figure how to upload. Not sure I could get it done by tomorrrow. I note there's a video upload button on the post editor, but I have no clue what to do...

Ah well, I guess I'll have to miss it. Vacation over tomorrow & back to work. Hope the reading goes well!

Header photo is very much there for me ... and absolutely breathtaking. I'd love to camp on your front porch!

About video recording ... that would be great! You should consider that the next time you talk publicly! :o)

Great hawking. I want to read more. I have not bought your book, but I will.

Hey, Pursey, long time no see. There are several exerpts from the book here, if you need more pursuasion...

The video uploading is very straightforward, albeit a bit time consuming. You will want to put a digital copy of the video onto your computer, then upload it just as you would upload a photo.

It's a good thing to do do before leaving the house to run errands, or have breakfast, though. The upload seems to take FOREVER.

O.k. guys..I've got nothing but words on his header! Why would that be? I did see the pic last week and it is beautiful!

I was in the audience today and thoroughly enjoyed it! I don't have one medical bone in my body even though my mother and grandmother were both nurses. I found your talk informative, fascinating and certainly entertaining. Thanks for giving of your time to Everett Women's Book Club today! I look forward to reading your book. I have a son who wants to go into medicine and I'm sure he'll enjoy your book too. Thanks again!

Rose: thank you! I really enjoy doing those events. It was a great turnout, and people seemed to have a good time. They took away the cookies too quickly at the end, though.