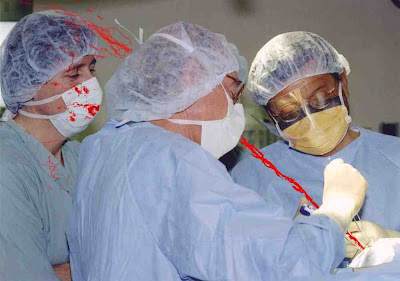 Like most training programs, mine had a weekly conference in which deaths and complications were displayed, discussed, and dissected (most are called "M and M" conferences, for Morbidity and Mortality. Standing for Death and Complications, ours was called "D and C." Given the scraping of the flesh until blood was drawn, it seems very descriptive.) In recent years there's been a trend, I think, toward deëmphasizing those meetings; despite the so-called "privileged" legal status of such discussions, time and litigation have caused people to fear exposure. Which is damnably bad, because those conferences are, in my opinion, indispensable to teaching and learning. But that's not my point today.

In the conference, take-backs for bleeding were not-infrequently addressed. In fact, the phrase "It was dry when we closed, Dr. Dunphy" (Dunphy was our chief, and usually he ran the sessions) was so common that one chief resident, when presenting such cases, took simply to saying "I-W-D-W-W-C, D-D." How can it be that a surgeon would have to re-operate for bleeding? What sort of incompetent idiot could have been so careless? I'll tell you: anyone.

There are some situations in which a surgeon will look at a little oozing here or there and make the judgment that it's not a big deal, it'll stop, it's OK to close. Those are not the problem. The kind of bleeding that requires re-operation tends to be brisker: a little artery somewhere, pumping away, is typical. No surgeon would have seen that and said, screw it. So what happened? Simple: it wasn't bleeding when the operation ended. And this'll make you happy: the healthier you are, the more likely it could happen to you.

Within the walls of blood vessels are muscles. In response to various changes in blood volume and other factors, they tighten or loosen to maintain or adjust blood pressure. They also snap to attention when a vessel is cut. The younger and 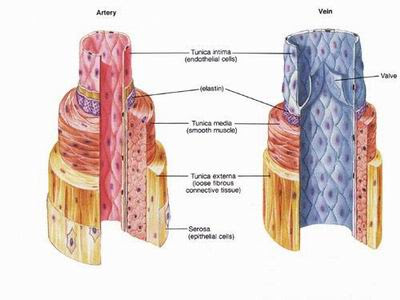 springier, the less enpipened with cholesterol are those vessels, the snappier is the response. With muscular integrity, a cut artery will retract and constrict, thereby lessening or stopping bleeding. It's a good thing, especially if you're facing a saber-toothed tiger in the woods. Less, though, in the context of today's story: a small artery can stop itself from bleeding intra-operatively. The effect may be amplified by the fact that blood pressure often runs a little low during surgery. On awakening, the blood pressure normalizes; the spasmotic reaction of the artery muscle relaxes; the fresh small clot that likely will have formed is easily washed away... The good news is this really doesn't happen all that often (our D and C conference included reports from several different surgical services at four different hospitals). Mostly we see vessels and unbleed them in advance. But things happen.

One of the more annoying of the frivolous lawsuits I've had, signaled as it was by the arrival in my waiting room of a sheriff's deputy waving a subpoena, was occasioned by a reoperation for bleeding. It had been a very low intensity situation; so low, in fact, that it wasn't until the next day that the need became evident. The surgery took only several minutes, delayed the man's departure by one day, and had no further consequences. At the time, things were fine between us.

On those rare occasions when I re-operated for such a thing, I didn't charge for it. Our anesthesia people coded their bills based upon the surgical diagnosis on mine. No bill, no code. So they winged it, and came up with a code that showed up on the bill as "Reöperation to repair artery," or something close to that. Which, hemi-understandably, suggested I'd done damage that I'd had to repair, which was not how I'd explained it to him at the time. Caught in a cover-up? The most cursory review of records -- not to mention a phone call -- would have disabused anyone of the misapprehension. Eventually it did, as it should, go away with its tale between its legs; although not without further erosion of my already tenuous gastric lining. I digress.

It's a safe bet that postoperative bleeding will never be entirely eradicated unless the time comes when the only people operated on are those with such hardened arteries that they can't retract back and tighten up, in which case all surgically caused bleeding will be evident instantly. That would be bad news, indeed.

Hey Sid, How did you get those little umlauts over the letters? Pretty cool, but I was not aware that was a correct way to spell "deëmphasizing" and "Reöperation." Dang you are smart. Even re-do punctuation.

Can I be like you when I grow up?

not to be the one to criticize but shouldn't rob be with a capital letter?

taking someone back for bleeding was for me always very frustrating. i nearly never found the bleed. they had usually stopped bleeding before theater.

Bongi: it was an homage to you.

IT'S AN HONOR TO ME TOO.

Bongi, I too have never found the bleeder when I had to take someone back for bleeding--the blood was all clotted. Very humbling, even when you know you "had hemostasis" when you left the OR the first time around.

Well, I must say that's my experience, too. In the case I mentioned, it was, in fact. Still, the point that we typically don't close when there's bleeding, and the mechanism of bleeding post-op applies whether it's an obvious bleeder or not.

The uterus is evil for postop bleeding. It gets hemostasis by contraction, so it is possible to miss a large venous sinus while closing the incision (because the myometrium is so contracted, it's not really actively bleeding at the time), and then if the tone lets up a little bit, it can start bleeding, a lot.

You can usually see it when you go back.

Is it just me, or is only one person wearing a bit o plastic to protect the eyes from the bleeder in that photo? :-o Glad I got my Oakleys...

Oh man. Great. I *was* going to try to get some sleep tonight, if the opportunity presents itself while I'm on call. But I did an open appy on a kid this evening. Now I may be waiting for the other shoe to drop...

Apart from the initial embarrassment of getting squirted in the eyes with a bleeder myself during a pneumenectomy case, as i was peering over the shoulder of a scrub nurse, I soon realized the punishment for my transgression. Being a sales rep, 1000kms from home that day, i had to hang about for the obligatory blood tests that friday night. Lesson learnt.

Interesting post on bleeding. I recently had two lumpectomies for breast cancer (they didn't get clear margins the first time) and the surgeon told me my blood is "thin and oozy" and I bleed all over the place. It causes quite a mess in her operating room, from what I could gather. I take low-dose aspirin but I had stopped that a week before. I also take venlafaxine, which supposedly has an antiplatelet effect. I wonder if it could be from that.

I do laparoscopic radical prostatectomy . Yesterday, I operated on a cardiologist with coronary disease who recently got a stent. His cardiologist asked to start Plavix, aspirin right away, even as we had him on Fragmin throughout. What is the risk? How do we know how much is safe to anticoagulate after major pelvic surgery? What are the rules?