It Sent Me Up a Wall 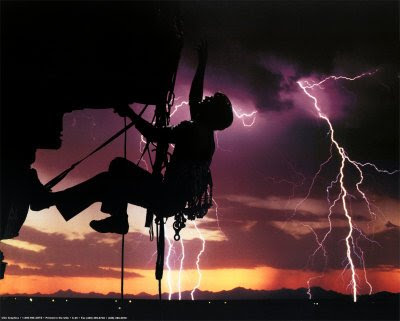 A post by the always entertaining and often profound bongi reminded me of an amusing occurrence from the recent past.

At a free-standing surgery center where I sometimes work, I arrived in the usual wee hours of the morning ready to do battle. The center occupies the main floor of a multi-use building, so there's an outer door to a lobby, and another inside providing access to the work spot. On this occasion, for some reason, the outer door was locked, and whereas both doors are windowed generously, I could not make myself seen by anyone at the reception desk. In retrospect, this may have been because there was no one at the reception desk.

The side doors are windowless and hostile; also, locked. I went around the corner to where the operating room is, and studied the situation. It has a long horizontal window, narrow, running across the top of the room, around eight feet off the ground. (One cool fact -- irrelevant, I'll admit, to the issue at hand -- is that the window has a motorized shade, so that when operating and ready to view the screen for the laparoscopic part, the shade comes down at the touch of a switch, darkening the room. Nice.) Not really considering how it might be received by the people on the inside, I began tossing bits of gravel at the window. The response, if any, was not evident from the outside. Certainly it didn't open any doors.

I noted a tiny decorative brick ledge around the building, a couple of feet off the ground, protruding less than two inches. I'm an ex-football/rugby player (defensive line/second row scrum) with size 14 feet (48, +/-, European), reasonably strong but demonstrably ungraceful. Taking off my floppy sandals (yes, that's what I wear in the OR: Birkenstocks. They have great arch support -- but don't climb walls worth a shit), I toed my way onto that ledge, grasping at essentially ungraspable spaces between bricks with my surgeon's fingers. Managing a few seconds of upheaving myself, I got to the point of being able to knock on the window, once, before I fell back down. From the inside, a knuckle might have been visible, but not me. (At this point, I was later told, the nurse setting up the room was beginning to get frightened, trying to remember the number for 911.) Seeing the doors remaining closed, I wall-climbed once more and managed enough purchase to get my face up to the window, affording a brief view of the nurse, evidently startled to see a head bobbing disembodied eight feet above the floor; but enough to see a hint of recognition crossing her face before my fingers went the way of my toes, and I again had to fruzzle back to Earth.

Many times I've tried to picture how it could have looked to someone who had passed by at that hazy hour: a large individual, stocking-footed, clinging ungainly to a wall, like the glomulous opposite of Spiderman; releasing so quickly that the passer-by might have wondered if (or hoped that) it was only imagined.

I heard my name called from around the corner, where I hobbled to find an open door and a couple of nurses showing a mixture of bemusement, uncertainty, and hilarity. It took several weeks of broken promises, and I finally was given a key.
Posted by Sid Schwab at 7:02 AM

Trying to remember the number for 911! OUCH- Any feedback from that nurse since the post?

Echoing Tom: Did you scare that nurse "to death"? Is she still speaking to you?

Glad you weren't hurt "fruzzle back to Earth"! Another good word--fruzzle.

A Wonderful story. I am not at all hurt by your stealing my thunder on the Birkies. I don't think I would have imagined it referenced my article at all. Great minds think alike? Perhaps it is just a sign of early dementia.

When I was at the fire station, there was a big upgrade from our good old fashioned deadbolt locks to a fancy and very expensive keypad and number system.

The problem was, our leadership declined to give anyone the door codes for "security reasons." We had to continue using our old fashioned keys, despite the $4000 digital locks we inserted them into.

Our solution? Program a garage door opener to operate the big ambulance bay doors, and stash it outside. It worked like a charm.

Excellent story to cure my insomnia; thanks! (ps that IS a typical surgeon's story....)

funny how these things are, well, funny years later. at the time not so much.

I imagine that after this, you began thinking as you were called in whether you needed to ask how you were supposed to get in some place in the middle of the night.

These days, it's experiences like this that are lost in the era of cellphones and simply calling to gain entry.

My name is Ramprekash, I have a blog for acupressure.http://my-acupressure.blogspot.com which has google page rank 4. I like your site. I would like to have a link exchange with your site.you can paste the code of my site which is given in the left side of my site.if interested please mail me to sree1280@yahoo.com. Thank You.

You wear Birks?? I won't operate without my Danskos, although I'm still mad that they discontinued the old "Sport" line. I like my Birks for outside the OR, but I don't like their clogs and Plastics cases can be a little bloody for sandals.

BTW, it might be a good idea to save the charge nurse's phone number in your cell. I've made great use of that number several times.

Thanks for the laugh, Sid. I can just imagine the scare you gave the nurse. Last place she's apt to see a surgeon's mug is gaping at her through a window eight feet off the ground. You're lucky you didn't break a fingie or three.