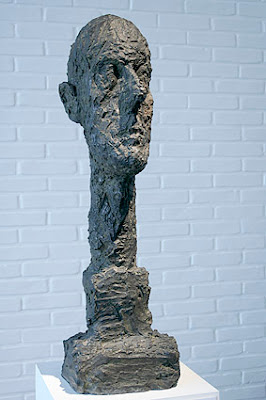 Neck surgery is fun. The anatomy is cool, it requires delicacy of technique, and it's a good example of the value of working in exact layers, to which I've previously referred. (There's also the fact that when the good part is over, it only takes a couple of minutes to close.) In particular, I'm talking about the thyroid. Despite being right under the surface, which makes it easily accessible, it's secreted under several layers, like the trinket in a surprise package (to quote my favorite book.) Skin, fat, platysma muscle, sternocleidomastoid muscle, omohyoid muscle, sternohyoid muscle, sternothyroid muscle. I was taught, once under the platysma, to develop abundant flaps up to the top of the thyroid cartilage, and down to the sternum and to divide those vertical muscles at the slightest provocation.
In practice, I decided neither was usually necessary, cutting down on post-op swelling and discomfort. The trick is to find the exact middle of the vertical muscles -- which is sometimes quite obvious and sometimes not -- and find your way to the perfect surface of the thyroid. Not a cell layer too shallow. Then you can sweep your finger all across the gland, which is bi-lobed, shaped like two wings of a butterfly, and free it from the under-surface of all those muscles. While that sweep isn't as dramatic as feeling the liver, it's still pretty slick. Your finger is sucked into a quite tight space, enough that it feels as if it shouldn't be able to move at all. Yet when just right, you can insinuate it quite far into the upper and lower reaches of the neck, feeling the adventitial layers give way, bloodlessly. Having done so, and if the gland isn't too enlarged, you can pop each wing/lobe forward and partially out of the neck, after which you can work your way to the backside, where all the action is. By "action" I mean the nerves to the voice-box (laryngeal nerves), injury to which leaves the patient hoarse or -- if you booger both of them -- with breathing difficulty; and the parathyroid glands, accidental removal of or damage to which can leave the victim with dangerously low calcium levels. This is where eagle eye and careful technique are essential, and once again when being in exactly the right layer makes all the difference. Pushing gently with a peanut sponge grasped at the the end of a small clamp slides the surfaces clear like the gentlest of receding waves, like rain on a clean window.

One of the best tricks I learned for thyroid surgery is to place sutures in the poles of the gland as I work my way to their apexes. Place a suture for traction, use some careful blunt dissection, place another higher up and pull some more. Sometimes it takes three or four sutures in each zone, but it really facilitates the process and is part of what allows leaving the vertical muscles uncut. With respect to avoiding injuring the laryngeal nerves, there are two ways to go: be sure you see them, or be sure you don't. I sort of like the latter. Meaning, don't cut, tie, or cauterize a damn thing until you are absolutely sure it's NOT a nerve. That protects as well as laboriously dissecting the little wisp of a thing. Never dinged one, happily.

There are big thyroid glands, and there are huge ones. Those big boys require a little more work to get there, cutting those muscles I like to avoid, but interestingly sometimes getting them to roll out and relinquish their grip is no harder than in the normal size ones. Sutures, however, are entirely irrelevant.

I think one of my professors might have been the first to use electrocautery to cut through thyroid tissue. Prior to that, the method was unbelievably laborious: take little tiny bites of gland with a little tiny clamp, cut above the clamp with a knife, leave the clamp in place and move higher, until the gland was entirely freed and the patient looked liked she was wearing an African necklace, made of at least thirty or forty clamps. Then every nib was tied with silk suture as each clamp was removed.

Way back when, it was also standard procedure to have an emergency tracheostomy set nearby for a post-op thyroidectomy patient, for two reasons: injuring both laryngeal nerves could leave the person in need of ventilatory assistance; and bleeding into the wound could compress the trachea suddenly. "Trach set at bedside" was part of my orders all during training and for a few years after. Somewhere along the line, it occurred to me that it really didn't make sense: bilateral vocal chord paralysis would be apparent in the recovery room. Bleeding (never had it happen) would only need a snip-snip on the skin closure. 'Course I'd also abandoned the taught-technique of tight closure of those midline muscles. I figured if there were bleeding, I wanted it free to flow away from the trachea. One more example of realizing not everything I was taught was true.

There are some situations at the very outset of which you know you're in for a good time; others where you know you're headed for trouble. I think of standing at the top of a cool water-slide on a hot day, surveying the scene and concluding you're about to have a great ride; as opposed to Butch and Sundance leaping off a cliff, to the sound of their own screams: Sheeeiiiiittt! Seeing a long-necked lady, Audrey Hepburn-like, arched back and ready for her thyroid operation, is the former. This is the latter, neck-wise.
Posted by Sid Schwab at 7:20 AM

I don't think anything short of a frontal lobotomy could help that guy....and by the way, his crimes were committed in my "neck" of the woods, so to speak.

Good lord that was a big thyroid. When I did my Surg rotation I was able to see a thyroidectomy. It was a very cool case, but also one of the times where I was the most unprepared (as I wasn't supposed to actually be in on that case at all). I remember the surgeon stopping to look at me and asking: "Did you even read?" Felt really bad after that.

i always figured surgeons considered the neck a potential landmine, what with so many important structures at such close anatomic quarters.

One of the most memorable surgeries I watched as a med student was by a highly-respected cancer surgeon at Ohio State. It was a radical neck dissection, and he was a meticulous surgeon, carefully tying off all bleeders as he went (it was before the advent of Bovies).
The anatomy was laid out so beautifully, and he was a great teacher, pointing out various structures, asking questions as he went. It was breathtaking.

Hi Dr. Schwab - I left a long comment on your post about your parents. I inadvertently hit enter instead of preview and so it is now there unedited. (Sigh!) Again - you struck a chord within me. :) I hope it didn't go too off topic.

Is there a significant difference between an adult thyroidectomy and pediatric thyroidectomy? Can a general pediatric surgeon navigate all of those layers as you described? Thoughts? Please share. Curious.

catherine: sure they can. In fact, I'm certain they'd say they can do it better!

"the gentlest of receding waves, like rain on a clean window."

As ignorant of thyroid surgery as I am, this is nonetheless beautiful.

thanks, i'll let you know how it goes when it goes.

With all due respect Dr Schwab, a bilateral true vocal fold paralysis is not necesarly obvious in the recovery room. That's precisely why this continues to be a problem for general surgeons who don't have a feel for laryngeal function. It's also the reason why we continue to see unilateral and bilateral vocal fold paralysis YEARS after the thyroidectomy (or parathyroidectomy).

Perhaps I should have put it this way: bilateral paralysis requiring trach would be obvious... My point was about the "trach set at bedside" order of yore...

Fascinating. This one has special resonance to me as I had a benign tumor removed from my thyroid gland some years ago. The surgeon managed to gracefully place the scar into the fold where my neck joins my body, just to the left, and so unlike many people around here I don't look as though I survived having my throat cut.

Just getting ready to have a thyroidectomy myself (I have hoarseness and some breathing issues at this point). A bugger of a nodule, am euthyroid -- but my thyroid looks nothing like your HUGE thyroid pic. Crazy. An interesting read as I prepare to be "patient" in what I believe are very capable hands. Thanks again!
Diana

diana: glad to be useful. Good luck. Generally thyroid surgery is very slick and smooth. It's strange how in some cases a nodule will grow posteriorly instead of anteriorly and give symptoms out of proportion to its size.

Thanks for this clinical lesson, I'm going to watch my first hemithyreoidectomy tomorrow and was preparing. While looking for pictures of m. platysma I found your blog.