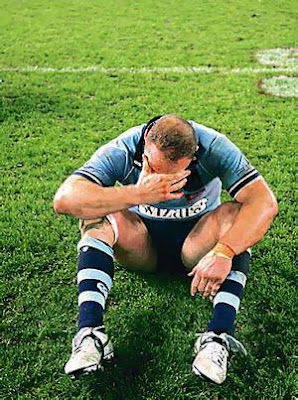 I watched a bit of the Pac - 10 tournament final the other day. A player for the Duckies was so "in the zone" it seemed anything he threw up went in. It was simply magical; I'd guess even some USC fans were mesmerized by what they were watching. You've seen something like it, I'm sure. A no-hitter where the pitcher has such control that he can do anything he wants with the ball; a running back who seems to move through the opposition as if they were paper posters; the gymnast who scores 10 after 10. A diver; a swimmer.

It's another of those things that probably can't be studied, but it seems pretty clear: on some days for some people in some situations, there's a coming together of mind and body in such a way that leads to a level of control far beyond the ordinary -- even when "ordinary" for these extraordinary athletes is beyond anything the rest of us could even dream of. And, likely as not, another day not soon thereafter, those same people can't hit a shot, get the ball over the plate, stick a landing to save their lives.

Of course, they're not actually saving lives. In the operating room, you need to pitch a no-hitter, sink all your threes, stick your landings every time. But is it a reasonable expectation, given that -- not unlike sport -- it's an intensely physical undertaking, translating very specific intention into very particular material result? If everyone else loses it once in a while, why not a surgeon?

In sports -- even professional sports -- the default presumption is "very good." "Perfect" is the exception. No problem if you don't go four-for-four. Give up a home run? Hey, at least no one was on base. And, of course, that's as it should be. I happily admit hitting "nuthin' but net" time and again is harder than placing a row of stitches. It is, however, interesting that whereas having an off-day is entirely expected with an athlete, it's never even mentioned as an issue for surgeons.

I don't know how analogous it is; I certainly don't argue that standards for surgeons ought to be as malleable as they are for sportspeople. Yet, being humans in the midst of an intense physical undertaking (probably shouldn't invoke "undertaking" and "surgery" in the same breath), it seems logical to assume that surgeons, on any given day, might have less perfect command of their skills than on another day. Doesn't everyone?

Even intellectual skills, or artistic, would seem to wax and wane. The writer who can't get a word on a page one day, who can't type fast enough on another; the painter who paints over her work and can't stand to look at it now, but who later gets mind onto canvas as if no hand were involved; don't these things happen all the time, perfectly expected? Well, guess what? I've had off-days and I'd bet every surgeon would admit -- at least inwardly -- that he or she has, too. Shouldn't it go without saying? And if so, shouldn't it scare the crap out of you? Well, maybe not. The scary part, anyway. Because "off" doesn't mean "offed."

I think it's a chicken/egg sort of thing. If a guy hits his first three, he gets pumped. If it clanks off the rim, well, not so much. There's a feedback loop. Likewise, you expect certain things to happen in surgery. Annoyances. A little bleeder here, an adhesion there. You navigate the waters. But sometimes it's one thing, then another. And another. Can't get the rhythm going; always one more little distraction making the flow elusive. So you get agitated, adrenalized. Then the hand is a tiny bit tremulous. You notice, and assume the nurse notices. You accidentally pull a stitch out. Take two or three attempts to grab something properly with a forceps. More adrenaline, more stress. Jesus! This patient is really a bleeder. One of those days. What's going on here? And so it goes. Nothing is smooth. Getting to point B from A is a series of zigs and zags.

So is that my fault? Is it just the random confluence of things in one place, like flipping up heads ten times in a row, or am I contributing to the chaos? Whatever it is, it adds up. It can get to you. On some occasions, I've literally had to step back from the table, take a deep breath, and make myself relax. Ask the circulator (the person in the room not scrubbed into the operation) to get some O.J. and stick a straw under my mask. The equivalent, I suppose, of the coach calling a time out, taking a stroll out to the mound.

The difference is you can't yank yourself out of the game. You've got to find a way. No one in the bullpen. So you do; you just do. You can't lose it, so you don't. Which is why, I think, it shouldn't be too scary to read this. It's part of being a surgeon; it's what we've learned to do.

Maybe laying down a bunch of sutures isn't as hard as laying down a bunt; but doing it no matter what -- knowing no one will take the ball from you, pat you on the butt, and call in the reliever -- that's harder, I think. No excuses; no post-game interview where you say "Just didn't have it today, couldn't suture worth a damn. Just gotta shake it off and learn from it, put it behind me. Tomorrow's another day, it's early. 'Nother patient tomorrow. Put on the ol' scubs one leg at a time. One operation doesn't make a career. I trust my stuff. I'm not worried. Trade rumors? Don't pay no attention."
Posted by Sid Schwab at 5:55 AM

Dr. Schwab,
I can't speak to the medical world (except for being a patient on numerous occasions), but I wanted to tell you how much I needed to read the topic of your post today. I have a 3.8 GPA in college and I'm on the National Dean's List and I'm attending college as a gift to my trauma surgeon, but I just learned that I failed my huge research essay in Composition II (really, really bad considering that I love to write historical novels). So anyway, I think a good doctor is also a good psychiatrist (whether they know it or not).

It's great, again, to hear a down-to-earth surgeon's perspective on stuff like this - because it jives with what I expect in the real world. Of course everybody has off days, why shouldn't surgeons? It's only the ones who pretend to be perfect that come totally unhinged when everything doesn't go as planned. I remember observing one of my less-favorite vascular surgeons as she realized she was in way over her head, and didn't have the good sense to call in a backup surgeon until it was almost too late.
It never hurts to admit being human, I say.

There is the risk that if we Demand pefection from surgeons (or else), then how can we count on them to take the risk of saving our life? I mean, if there is something really serious going on and I need my doc to "take a shot" at doing the near impossible, will he feel comfortable or able to do so, in this litigious world lawyers and claimants have created? I wouldn't take any unnecessary risks if I knew a lawyer would be breathing down my neck the first chance they could. Heck, I'd play it safe and let the patient bear the burden of this hyper-legal world we live in... just sayin...