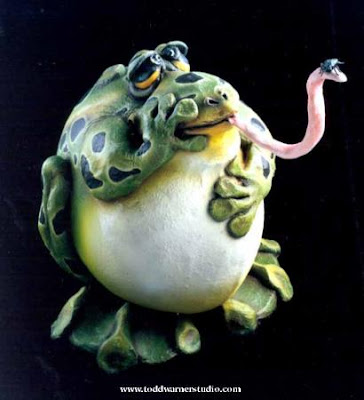 Let's see if I can describe something. The scrub nurse for the case I was doing this morning has a very cool move he uses to hand us the towel for drying our hands. For comparison, the typical method is simply to open it up and hand it over, or drape it on an out-stretched hand. Efficient, classic really, but hardly noteworthy. This guy, he folds it into thirds length-wise, then rolls it up like a sleeping-bag or a jelly-roll. Holding the roll in his palm, he secures the end with his thumb, the rolled side up and facing away. This he's done while we're outside washing, and he's all ready when we walk in. A flick of the wrist, and the towel arcs toward us like a frog's tongue at a fly, like a back-hand yo-yo trick, the formerly inner end landing in our hands, after which he lets go of his end. I think had we both been ready, he'd have been able to do a simultaneous two-handed toss. He says he's been working on it for a while. Were I more blogompetant, I'd take a video and stick it here. It's one for the ages.
Posted by Sid Schwab at 8:59 AM

As a puny medical student who has had trouble with simply receiving the towels without the superfluous flummery, I would be afraid I'd drop the towel, contaminate myself, or slip and contaminate the table. However, that does sound quite cool.

And I think *I* am easily amused.