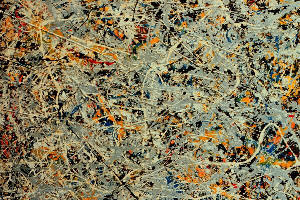 It happens sometimes: finished with a suture, you pass it back to the scrub-nurse, the needle contained in the jaws of the instrument, less than carefully locked. In placing it down on the sterile tray (the Mayo stand), you might see the needle spring up as if alive, arcing across the table to land an impressive distance away, on the floor. Or they get laid down momentarily on the drapes; or transferred by hand, holding the thread, only to have it slip away. Needles, in other words, sometimes find their way out of the field and into the ethers. Incorrect needle counts being anathema, adding precious (and expensive) minutes to operating time, forcing several people to devote annoying amounts of time in the search, occasionally even requiring reopening of incisions, you'd think thought would be given to making the hunt as easy as possible. So why do the designers of operating rooms so often come up with Jackson Pollack patterns on the linoleum; and why do hospitals buy it?

Only a few days ago I was reminded of it again, as I was asked where the needle was that I'd just instrument-laid in front of the nurse. As I've done many hundreds of times, I'd pulled it out of a laparoscopy port without giving it any particular thought. Automatic move. But somehow she hadn't received it. Could I say for sure I'd watched it all the way to the point of release? Well, no. Yet there was no reason to think I'd fluffed it, left it inside, and I was sure I hadn't. (If you grasp a suture in the wrong part of the jaws of some instruments, the grip is flimsy, and withdrawing it through the port provides enough resistance to brush it off.) I looked at the floor near me, and noticed that ridiculous surface, designed, I guess, to allow people to ignore sweeping their kitchens too often: hides dirt like a miracle. Leave the lettuce, Lucy. Won't show till it blots out the whole damn pattern.

Going through the litany of look-sees, finding no needle, we had no choice but to re-scope the entire abdomen, and, finding nothing while continuously updated on the fruitless search around the room, we called for Xray to be sure that needle was nowhere within our patient. As certain as I was, I couldn't be certain. No needle. Satisfied as we could be, we returned to sewing up, the meter running. At some point, an eagle-eyed nurse found the needle, lying invisibly within the curled and multi-colored linoleum lines. It couldn't have been harder to see if the pattern were of millions of surgical needles.

So tell me: what would be wrong with a single-color floor, chosen specifically for its ability to highlight a wayward needle? It's a damn operating room, ferchrissakes! Doesn't a dirt-hiding floor seem a little out of place?
Posted by Sid Schwab at 7:21 AM

I work in finance--at a pretty high level, thanks--and it doesn't take much to get me off onto a rant about why the HELL we let anyone anywhere NEAR a set of loan closing documents with a BLACK GEL PEN. Do we just WANT to throw away A WEEK'S PROFIT on having clerks pore over that stuff for hours trying to distinguish the ORIGINALS from the COPIES???

Every industry has somebody somewhere whose entire function is to defeat everyone else's purposes in these passive-aggressive fashions. The problem is that if your hospital fires them, they'll just come work at my bank. I, on the other hand, am going to fire my closing manager, which will provide you with a new Facilities Specialist.

Unless you surgeons can figure out how to suture those stupidectomies.

fabulous post. and i'm glad you tried so hard to find these mysterious and jumpy items.

well, at least you don't operate above haystacks ;)

If so, get one of those nice magnets-on-a-stick and keep it in the OR; you'd need three or four, since they'd get lost/stolen. Then a stray needle could deliver itself magically, and the hunt would end quickly.

Dang, I should have patented that first...

I love your story. As a scrub nurse who has done a lot of open heart and microvascular surgies, I know all to well about the missing needle(s). I have also worked in hundreds of OR's and have seen very few friendly flooring surfaces. I have seen the hard to find magnets and the nurses on their knees running white towels across the floor hoping to find that needle.

Think about this. The needles do go somewhere. Many are not found......until later. Hmmmm

I vote for solid color floors with no specklly thingys

The Magnet thing is good, but also look on the shoe covers! Many a needle in on the cover or the sole of a foot. I hate the incorrect needle count when a 7-0 on a BV2 is lost - it does not show up on Xrays - too small! Thank the Lord for my loupes. At least I can be sure the needle is not in my carotid incision...

The first commenter reminded me of OSHA and the "safety" needles and scalpels we now suffer with in the OR. An OSHA engineer has never used any of that stuff in real patient care. Ah well, don't get me started.

Seriously, is that really the floor of your OR in the pic? I don’t see, why anyone should bother searching on the floor. It’s way worse than looking for the proverbial needle in the haystack. The nurse who found it must have a really sharp eye!!

Here in India, in government hospitals the floors are tan or off-white linoleum mostly. After a particularly lengthy operation it ends up looking like a battle has just been fought there.

View from the Trekant said...

My hubby's an architect who once did a school project, at my suggestion, on redesigning the ICU to be more nurse/patient-care friendly. He LOVES to talk to people about how they plan on using a space -still does this years into his own practice.

The nurses that night were delighted to talk to him and even drew up a list of a dozen helpful suggestions.

As in "For the love of G--, please don't put the light switches on the post behind the patient's bed. Intubated, sedated critically ill people can't always help you turn the lights on or off!" and "Please find a slot to push the bedside commode in, out of the way."

Turns out, when a new ward or O.R. is built- no one ever gets the architect hooked up to talk to the people who will have to use it.

The architectural planning committee does spend hours, however, talking to paper pushing types, donors and administrators.

The picture is not of the actual floor, but it's really pretty darn close! It's a Pollack painting, in fact.

Echo Doc, so that's why all the doors in the hospital--including the cancer center's infusion treatment area's--weigh 400 pounds. And there I was, thinking that my health-care providers wanted me to try to push open that incredibly heavy bathroom door whilst dragging along an IV pump in my weakened physical state because they somehow thought it was good physical therapy for me.

I remember my surgeon telling me, post-laparotomy, that I wasn't to be lifting anything any heavier than the phone book. I asked if someone was going to eventually come get me if I found myself leaning fruitlessly against some door in the hospital, trying to lever it open with my cachectic little arse. I mean, sure, that won't open a belly wound like lifting a heavy object, but it has its Kafka-esque moments.

Rotating a flashlight on the floor is fantastically effective, though you would need to dim the lights first. I learned this from a gunsmith.

Now THAT is a really good one! I'm trying it, if there's a next time. Which there undoubtedly will be.

Try finding a 9-0 BV needle on the patterned floor - im-freaking-possible. Our OR floor is probably similar to your - dirty off-white with lots of little gray lines. Grr. . .

Glad you like the flashlight idea, you won't be disappointed.

I confess to submitting the following somewhat smugly:

If the floor was reasonably flat, you could slide a sheet of paper (heavy paper if you've got it) in your hand something like a snow shovel.
Shouldn't take too long to cover the floor if you go back and forth like a farmer plowing a field.

I'm impressed with the ingenuity expressed here. I do look at my shoe covers. Remaining scrubbed in, I've never had to resort to the other methods, although I've seen the magnet roller used to good effect. I think the "shovel" method ought to be tried, if for no other reason than to hope someone who was involved with floor-pattern selection would wander by and see what it'd come to.

not the most appetizing pollack.