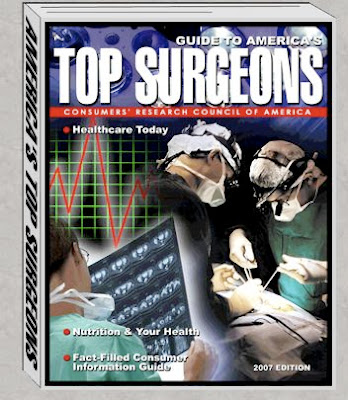 So I received this thing in the mail the other day. Nearly threw it out along with the rest of the junk, but it was shaped like and had the heft of a possible CD of some sort, so I opened it.

"Congratulations!" it grinned (or was it a wink?) "Your listing in the "Guide to America's Top Surgeons" is most impressive. You are among a select few..... Accomplishments like yours should be displayed proudly...." It went on to provide me with a number of options for flaunting my inclusion, from nicely framed, personalized and plaqued, to etched in glass. (Sadly, none carved in stone; but one of the glass panes is a proud erection on a faux marble base.) $149 to about $229.

Included was a single small blue-tinted page, about four times the size of a post-it, evidently from the people who produce the actual book. "Consumers' Research Council of America is pleased to announce your inclusion in.... [that thing in the previous paragraph], 2007 Edition.... The selection is based on a point value system that awards points for education, years in practice, affiliations with professional associations and board certifications. No fees, sponsorships, donations or advertising are accepted from physicians, medical treatment facilities or hospitals to insure an unbiased selection." Mind you, this is inserted into the high-gloss fold-out display of my showcase options, handy ordering form included. It (the blue page) ended with a website and an address (P.O. Box?), right there on Pennsylvania Ave, in my nation's capitol.

As many readers of this blog may know, I haven't had my own practice for over five years. I've been assisting others regularly, have done half a year as a surgical hospitalist, a little mentoring here and there. But I left my clinic a ways back. During the denouement of my active practice, I got a nearly identical mailing; at that time it was for being included in a national "Guide to Top Doctors." That one produced its list by asking physicians around the country to whom they'd go or send their family, among doctors practicing the various specialties. On the current one's website, it's correctly pointed out that that other system favored docs in big clinics, like me. The prior package included, of course, a similar set of impressive plaques and plates.

Each "guide" is available for public consumption; I actually got the first one, just to see what the heck it was. It's a real book, organized by regions of the country, and nicely produced. Having asked practicing physicians, I suppose it has at least some sort of credibility, although it's absolutely true that it disfavors the solo or small-group docs; and having none but that single criterion? -- well, doctors' choice are subject to surprising whims, just like real people. And this new edition (I'm unaware of any prior ones, by the way), with its "point system": that I'm listed as a 2007 winner -- raises more than a few questions, eh?

Hey, if I still had an office I could have ponied up and gotten each of those, stuck them somewhere prominent (although I didn't for the first one, when I was still in practice. I've mentioned it in hawking my book, though). My clinic probably would have paid for them. And I bet some patients would have been damn impressed.

Any point here? Yeah. All forms of data-gathering aimed at providing consumers (or payors or government agencies or financial fascists) with info on which to judge doctors or hospitals -- no matter how well-intentioned or plotted (and less evidently cynical than this one) -- are subject to such a wide range of sampling-error and other problems as to make them nearly useless. Any I've seen to date, at any rate. Yet it's a worthy goal, and in fact I'd always thought that if there were meaningful ways to measure and compare surgical outcomes I'd float to the top (so do turds of people with fat-malabsorption, but that's another story). Once or twice such lists appeared, based on an insurance company's data, and indeed I looked really good. Those who didn't screamed loudly enough that the lists got pulled. So, unfortunately, the state of the art remains for now, caveat emptor. And the poor emptor has a mighty meager set of resources on which to base his/her caveatizing. I might write more about that, later.

[Addendum: Curious, I emailed the Consumer's Research Council, asking who they are and requesting more information about their publication. I got an automated response promising a reply within 24 hours..... 96 hours, and counting. Were I you, I'd take them off my list of possible doctor reference aids. Those plaques, however: some are quite attractive....]
Posted by Sid Schwab at 7:45 AM

I wouldn't gloat too much about inclusion with this company.

I am a surgery resident. This past week I and all of the other residents received the same notification from this company that we were among America's top surgeons. They wanted us to spend several hundred dollars to buy a plaque honoring our inclusion.

We aren't even board eligible yet!!

Now Sid, here I was thinking you were more astute than this.

These things are simply money-making enterprises. How much do you think it costs for them to generate these books? They probably print them in small batches as needed, as duped MDs "buy-in" to this concept.

Uh, mad and greg: I think that was my point, yeah? Or is my writing that bad? "wink.... erection.... cynical" Were these words actually lost, or am I missing the tongues-in-cheek as I assumed you were missing mine?

Several of our ED physicians were joking around about all of them being "offered" the chance to be included in the "Best of..." artcle one of our local magazines puts together... For only $299, they could send in their bio to be included as one of the best physicians in our state...

I was suitable depressed when not one of the doctors from myhospital was chosen by that magazine as one of the best doctors in the state the next month... (tongue firmly planed in cheek for those slower on the sarcasm uptake...)

Good goggly moggly, this sort of scam survives in the doc world? Here I thought the publishing world only collected this sort of excrement.

I've been contacted by the same magazine no less than five times so that I could purchase a "lovely realistic plaque" for one of our authors who received a nice review for the paltry *coff* sum of $249.

Well I am trying to find a top bile duct surgeon and cancer center in the San Francsico Bay Area, so I kept running into this service on the Internet. That's also how I found your website. But I'm still lost. How does one find the top surgeon, and fast? My dad needs help. We'll even travel to wherever the top surgeon is. Anyone can help? thank you!

Hey, if one of you "Best Surgeons in America" would like to have services provided by one of the "Best Pathologists in America" (I just got my honored notice today!), please let me know....

Thanks for posting the info about this scam on the web...

What shall those who are truly the "best in America" do for a living now?

What is depressingly informative is that I first learned of this organization through a website of a Dr, who bragged of being on the listing.

The organization hawking these physician awards also goes in for other professions such as lawyers and financial planners. Here's a link to a choice article: