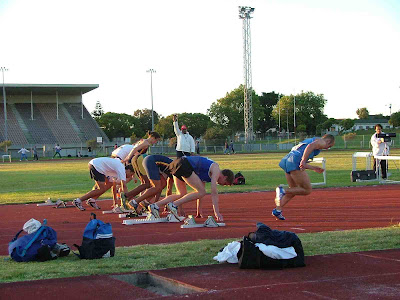 I've tried, but I don't seem to have it. Much as I'd like to return to the sort of writing I was doing earlier in Surgeonsblog, it's not happening. It's as if I'm in a darkened house with many rooms, but all the doors are locked. In a deja vu sort of way, I know there is stuff behind the doors, but it's inaccessible. Familiar, yet out of reach.

Re-reading old posts, I feel envious of the person who was able to write them, and of the good I feel it did, not to mention the wider world it created for me. But now I'm an interloper in my own life. It feels unnatural. Or, at least, unavailable.

So we'll see. I'm rummaging around in my brain, but so far it's like showing up for an Easter Egg Hunt. A day late.

To anyone who may have wandered here for the first time, I invite you to check out the "Sampler" post, for a sense of direction. Meanwhile, I'll keep trying.
.
Posted by Sid Schwab at 4:45 PM

It's probably just writers block Sid; I get it now and then. The feeling is just as you describe. I sit there and feel what I want to say bumping around in my head; but when I try to grab hold, it slips away.

Give it a break - the muse will return.

It'll come. And I am one patient out there who's awfully glad for the posts you've put up. Even if *I* never got to have my inner staples be so cool and go plip plip plip oops out you go. I did, however, get searched a tad too closely in an airport for saying I had one or two of them in there.

You need some Continuing Series...like I do on my Blog...
"Top MILFs of the 60's" "Landmarks of Atlanta" "Young Dr. Drackman", a medical soap opera serialized 1940's Pulp Novel Style"...

Hey Sid,
I really enjoy and am inspired by your writing. Take a break... I took 2 years. Being a writer is in you, just as you'll always be a surgeon.

Dr. Sid, thank you for the years of educating and entertaining your readers. I think we're all the better for it. Meanwhile I'll keep my subscription to your blog and hope one day to see an update notice in my e-mail.

ignore all the understanding notes of sympathy, sid!

here's an idea-->a series of posts where you introduce your lay-readers to the tools of your trade. pick a different surgical device, or a class of them, and explain their use, how you learn to use them, any special procedures where they are particularly important, and any other memories you may have that are somehow tied to the tool.

i realize it may not be as profound as your regular fair [and your MD readers may find it dull], but many of us couldn't name a lot of those scary stainless steel 'thingies', nor have we got a clue what their pruposes are [beyond the most obvious ones]. i would promise to read every one. . . =D

ego: not a bad idea. I'll think about it. I have written a few like that in the past, but I'm sure there's more to say...

Still here and still reading what you write. :)

I just wandered into your blog for the first time (insomnia and decided to do some research on the spleen) two hours later I am amused and educated and still not sleepy. Don't worry about the writers block..it happens to us all. You'll probably wake up at 2 am one morning with so many words bumping around in your brain that you'll be typing 'till dawn.

I was delighted to see you'd resumed your blog. Please keep at it. I hope the posts will flow more easily soon.

Don't give up!!
Here are some thoughts
When just because you can does not mean you should-I don't want my gall bladder taken out via my mouth!
Have technological innovations decreased the clinical diagnostic abilities of todays young doctors. Thinking of the scene in doc hollywood where MJ Fox is preparing to medievac out a cyanotic kid "with heart disease needing immediate surgery" and the local GP gives the kid a Coke to make him burp.

Why NO, I can't help you, and this is why is the best advice you can give a patient.

Why universal health care may be bad for one's health.

Write about how one of the most successful bands of all time funded the development money for the EMI head scanner! Talk about stange bedfellows.

tom: problem is, I've already covered many of those (very good) suggestions. I wrote about gallbladder/mouth here; about loss of diagnostic skills here. I don't think we agree about universal health care. The idea of when NOT to operate is a good one. I think I've addressed it, if not directly, in a few posts, but it's true, I think, that good judgment is more about knowing when NOT to intervene.

Thanks for the encouragement. I haven't given up entirely.

I know exactly how you feel. It happened for me a couple of years ago now. I have tried many times since, to start again. I fear it is permanently gone. I now don't even have to urge to try it anymore. Not only blogging but also my twitter account has gone dry. I just have nothing to say.

It was great while it lasted and I am happy I had my blog, but, for me, its over.

I hope this all works out for you because, you are one of the best medical bloggers there is.

Thanks for the link to Physical Dx blog...

Another thought on potential topic:
Who will do this work (healthcare) in the future? California is in a fairly steady state of educating doctors, nurses, etc. yet our population is growing, the number of hospitals is declining and only 50% (~66,000) of the States licensed physicians (~125,000) work 20 or more clinical hours per week. Also, 50% of primary care and 66% of speciatly care will see med-cal patient.

Another idea; Health insurance does not guarantee access health care.

Thanks for coming back!

As a student determined to get into medical school, your blog has really, really allows me insight as to what may be lying in wait at the end of the dark tunnel of "education". I have learned a lot about myself and my chosen career through your insightful words (though not always agree with you ex. universal healthcare-- I am a Canadian ;-) Should you choose to stop writing on this blog, I wish you all the best, but I hope you know that your writing is allowing many people to look forward to something.

SV- we met on fBook!

i have a question for you have you. Have you ever heard of a surgeon ordering levaquin iv after a major bowel surgery, for example bowel obstruction, release lysis of adhesions? I thought zosyn or flagl are the main abx prescribed, for aperson who lets says has nkda.

I wouldn't consider zosyn and flagyl routine for such an operation, either, as perioperative prophylaxis, absent allergies.

well then, if you don't mind me asking.......what would you suggest? This is coming from someone who would truley like to know, and understand. This is in regards to any major bowel surgery. Any info would be much appreciated.I have seen routinely postop pt at a certain facility receive levaquin for prophalaxis, and at another facility that did many many more surgeries in general including trauma cases use other abx such as flagl, and zosyn among others but not levaquin. I just thought levaquin was primarily used for upper respiratory tract infections, and urinary tract infections.

For prophylaxis in bowel surgery I used third generation cephalosporins. I think levaquin, zosyn, etc, should be reserved for known infections of the appropriate type, and not for routine prophylaxis. But I speak only for me (and those who've written papers on the subject.)

Well said. Well said.
You might look up "summerfallow" for an analogy to what you are describing. It's one I use. There's one link you may specially like (which you'll find by adding "uregina" to "summerfallow"). Hope you enjoy it and find it as a restorative analogy.

thanks for your insight into the appropriate use of abx therapy regarding bowel surgery. Your info is much appreciated thanks again.

I find myself in a similar position - plenty to think about, no urge to write about it. I think I just need a vacation and a recharge.

Nice posts you've written since this one, Especially the one about the pen. And the campfire. Kumbaya....