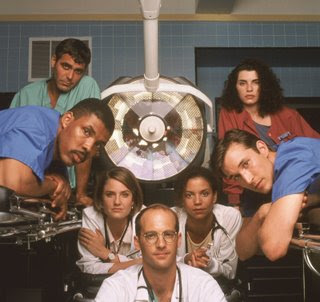 In response to a call for ideas, Mike asked about trauma. Specifically, he mentioned hearing that the most common cause of death in motor vehicle accidents (MVA) is injury to (and, presumably, exsanguination from) the femoral artery. He didn't hear it from me. (In fact, he admitted he heard it on an episode of "ER." That surprises me a little, because that show -- despite a completely inauthentic and distorted portrayal of emergency care -- didn't often give out-and-out false medical information. Or maybe they did. I stopped watching a few years ago.)

I'll admit I didn't look it up. But I can say that in several years working at one of the busiest trauma hospitals in the US, during training, and having cared for many MVA victims including fatalities then, and subsequently in my private practice, I don't recall seeing a femoral artery injury resulting from a car crash; certainly not a fatal one. By far the greatest number of deaths were from head and/or chest injuries, and I'd guess that is universally true.

During training, trauma care was the center of the world, the cauldron in which the steel of the surgeon was annealed. At every level of training, and especially as Chief Resident, my involvement in trauma care taught me more about surgery and surgical patients than any other time I spent in hospitals. I'm grateful and lucky to have put in several years, literally living there much of the time, at one of the (at the time, probably still) preëminent trauma centers in the country. Brilliant and tough, my teachers at SFGH (actually, when I was there, the emergency wing looked like this) gave me my sense of duty and commitment to my patients, the ability to make difficult decisions and to take responsibility for them, an understanding of the sort of "digital" thinking that a surgeon needs in the operating room. From them I learned a lot of technique, too; but the frosting on that cake I really owe to another, a decidedly non-trauma surgeon, Vic Richards, a legendary innovator, surgeon of singular intelligence (M.D. at age twenty, give or take), and a significant figure in my book.

But in real life, trauma was a pain in the ass. Unlike training, when we waited hungrily for the next case to roll in, in practice it was by definition a disruption. Destroying an operative schedule, crashing a full office, or robbing a night of sleep before a fully scheduled next day -- those were the least of the problems created by a call to the ER. It was the circus of managing a complicated and unexpected case in a hospital not primarily devoted to such things. It was dragging in a bunch of reluctant other surgeons (depending on the problem) -- orthopods, neurosurgeons. And the worst were the MVAs, for that very reason: multiple organs, multiple docs. If I had to come in to see a trauma case, give me a tidy gunshot or stab wound every time.

And I DID see a few injuries to femoral arteries from those causes. And to much bigger and bleedier vessels than that.

Once I got over the frustration at having been called (I'm an orderly sort of guy), it was never hard to be swept into the torrent. There is unequaled immediacy to trauma care, a series of "yes-no" decisions, absent "maybes." Real time, instinctive, urgent in the extreme, it's invigorating. There's nothing like the intrusion of certain death, turned around and sent away by the coming together of everything you know, to give a sense of purpose. There's nothing like slashing into a dead man's chest, sticking a finger into his heart, and watching him awaken even as your hand is beyond the wrist into him.

And I can do without it just fine.
Posted by Sid Schwab at 1:19 AM

I just started doing an undergrad internship at a large public hospital. All of the interns in the program, including myself, spend everyday hoping for a trauma. We volunteer in the ER but we also get to go in the trauma slot and observe. One thing I noticed on my first trauma experience was the relatively calm (and even lighthearted) mood of the staff as they tried to resuscitate a patient. I think I will always remember that. Another great post. Glad to see you are blogging again.

i think in the end i enjoy trauma, except for the fact that it is often after hours. it is usually quite simple, and can be rewarding. i am much less of an adrenaline junkie than i was in the old days though.

ou pre med i think maintaining calm during the otherwise volatile situations is essential, but that's just me.

So why don't all the scolds who like to get up in your s%%t if you so much as ride down your driveway without a bicycle helmet wear chrash helmets when they get into their cars?

Thanks for addressing it.

Mike: thanks for the suggestion.

S'Norm: well, of course the same "scolds" have insisted cars have shoulder harnesses with penalties for not using them; and there are air bags, ABS, anti skid systems. My training time was before any of those. And lots of the injuries are in people who refused to wear their harnesses.

Interestingly, and sort of off the subject, I'm in Portland at the moment, a city ranked among the most bike-friendly and bike-savvy. I've never seen so many people on bikes in the city, and so many not wearing helmets. I don't bike as much as I used to but I always have worn a helmet, and would feel stupid -- not to mention highly vulnerable, like a featherless bird -- without one.

No mention of the changes in how trauma is handled? The discovery that most patients do better hanging out in the ICU for a while instead of trying to patch them up in the OR immediately has really eviscerated (sorry) operative trauma. Nowadays it's more like 95% babysitting and 5% operating, and there's no babysitting quite as bad as trauma patient babysitting.

It's a good point, and a good subject: the extent to which various conditions are more likely to be observed now. Certainly another reason why it's a pain for the general surgeon.

Have you ever wondered why some patients in seemingly smaller accidents die and why others in horrible ones come through alright... some injuries but go home in a couple of days?

I've known people in much lesser accidents...and they died. A patient was in a fender bender of sorts and brought in joking and talking with staff. Ended up medivacced down to trauma facility and died in OR due to a lacerated liver.

Did you ever feel concern that someone you knew would come through the doors when you were on..or did that ever happen?

I suppose those could be post ideas. ? The seeming inequity of life vs death with patients and/or what it's like to be faced with someone you know in a trauma/medical situation.

I was getting bored with ER about 3 yrs ago too but kept watching it. I loved this last season. they really improved the stories and I was sorry to see them go off the air. Too bad they stopped writing like that previously.

For a minute there, BIMA, I thought it was a legit comment, even mistakenly referring to me as an EMT. In the end, though, it was just self-promoting spam. Lame.