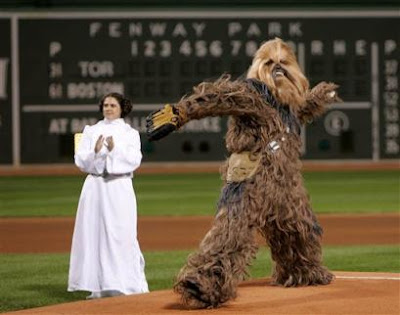 I feel a disturbance in the force, a stirring. Desire precedes delivery; but just this side of the edge of possibility I see resumption of Surgeonsblog, if only for a while.

There's no doubt I've always wanted to; it's been a combination of running low on ideas, and the taking over of my mind by the disignorable realities of politics, of our nation, our world. And it was easy: every day there are outrages aplenty, no end of blogfodder, as the evidence of devolution of our politics is everywhere. I suppose I got a few things out, decongested my hepatobiliary system. But really, it was the ever-truth that nothing I said on my other blog mattered. I always knew it. I don't know what led to the final recogniton that there was no point. Partly, I think, it was re-reading some posts over here, and the comments they engendered. It's not cold fusion, but I think it was useful, once in a while adding something to the common good, if only a tiny blip.

Here's the problem, though: now fully retired, I have only my diminishing memories on which to draw. My estimable surgical colleagues in the blogosphere are out there every day, doing good things and storing them up for good writing. I might have to steal ideas from them. I may have to repeat myself on a topic or two; spiff it up, add to it, make it better.

And I'd happily receive suggestions from any reader any time; comments here, or later. Barge in anytime. Meanwhile, I need a little more fermentation. But I think it's brewing.
.
Posted by Sid Schwab at 3:49 PM

You still have knowledge and a world outlook that can be spread. Use your experience to interpret daily events. Professor David MacKay (http://withouthotair.blogspot.com/) has written a book about *numeracy* in every day life.

Critical impact of aid in Africa.
Tough choices of health care reform.
365 Reasons Why You Should Start Exercising Now

If you are worried about only adding noise, just be sure to link and it'll all work out in the end.

give it time to ferment. we all look forward to the return of the master.

Heh. I knew you'd be back. Looking forward to reading your next post.

Definitely looking forward to anything else you choose to offer us.

I already expressed my joy at your return.

I love your writing...even in the other one. But looking forward to being a surgical groupie again. :)

Hope you'll decide to write here again. We miss you!

Ditto to all of the above.

Okay, here's an idea for you. I once heard that the main cause of fatality in car accidents is the severing of the femoral artery. Now, to be honest, it was on "ER" that I heard this. Is it true? How to accidents and/or trauma in general end up in fatality, and give us a few (more) stories. That is, if you want to :-)

Reading all the gory details of operations and disease will surely brighten my day compared to the sad commentary of our politics.

I think many of your readers shared the angst expressed in your politics blog. Even your detractors had to have come away with some enlightenment. But I'm so glad you're thinking of coming back here.

yeah glad to hear it, im hoping to do medicine and always felt a bit hard done by because i discovered your blog after you started the political one :D

How about more of the sort of psychological dilemmas and/or things you found hard as a new doctor but learned to deal with and how? thanks :D

Glad I never removed you from the feed. I guess I shoulda said something in the other place, but I can do that later instead of mucking up these comments.

You may be retired, but that doesn't mean your experience is useless. You've done a great job of showing that not all progress is good (while some, of course, is), and I hope young and future surgeons will be able to learn from you yet.

As suggested there must be plenty of news for you cut into. Not that this place need become "BadSurgery", but I'm sure some reason can be added in many cases. And presumably there is also genuine good news out there.

I think I once suggested you could have have a columnlike thing for young surgeons, but I don't know if any read. Soliciting questions from us might at least be a start. Even if you have little new to add, it's an excuse to link to past posts.

So if noöne else wants to, let me start:

I've decided to put my stuff where my mouth is and make good on my suggestion that we need to breed less. I don't expect I'll ever be in a position to have children, but I don't want any now, nor have I ever, so I think I may as well get a vasectomy. Now of course if I never have sex, that's pointless, but who's to say how the future'll be.

I'm seing my GP Tuesday, is there anything I should know and consider before that? And, of course, before the procedure? What'll happen? (I did a long while ago read the liveblogging when of the Sciblings had his done, but more info can't hurt.)

I'd love to hear some more anecdotes about life in med school from you.

Call me weird but I was quite interested in the political stuff.

looking forward to it!

All I can say is you can take the surgeon out of the OR,,,but you can't take the O.R. out of the surgeon...(plagiarized from some place I cannot remember)...I followed you over at ''cutting'', enjoyed it all even when I disagreed. I will miss Frank, but am sure he will appear here soon.

Just clicked on your other site and thought I'd check this one out. Bingo!

We are all more than our old experiences, even in retirement. Everything in broadcasting (my former work) and electrical engineering (my husband's former career) has changed, so we're all kind of obsolete in these latter decades. You're not alone!

I'm learning more about interior design now -- and music. I've never really liked country music, but after listening to Rascal Flatts a couple of years ago, I've added it to my areas of interest, in small doses.

Last night, I watched a wonderful show on Animal Planet. I learned all about hippos! They spend most of their time in the water during the day -- they mate in water, sleep in the water, give birth and nurse their babies UNDERWATER. They have documented communication between individuals and groups. Hippo sweat looks like BLOOD -- red and angry, but it has anti-inflammatory properties. Fascinating stuff!

Do an open forum a couple times a month. For example: Your visitor Sili wanted to know about vasectomy experiences. Here's ours: My husband (now Grandpa) had his procedure done in 1973. This was a wedding gift and it's the best gift I have ever received! We married with five kids in a merged family and didn't want any more. Since then, two of our sons have had the procedure more recently.

My husband underwent a very simple operation performed in the office of a urologist in Marlboro, Massachusetts. I watched and held his hand. He was funny as all get-out under the sedation.

Now my husband guarantees me "Not a sperm in a barrelful" and I happily threw away all the pills, condoms and other paraphrenalia. I haven't even worried about conception for decades.

There was some rumblings in earlier years about how a man could get allergic to his own sperm or semen and there might be immunity problems. Not sure where that controversy led.

By all means, Sili, if you wish to be child free, go for it! These days, there are plenty of people who support this choice. On this tiny planet, we've already got a population problem.

Parenting requires rigorous work, is not always appreciated, and changes the nature of you life in every possible way. You have to expend a huge hunk of personal time, space, and money. I have regrets sometimes because I might have been one of the dedicated working women who opted out of motherhood in the 1960s and 70s.

Grandparenting is more fun, now that I'm 70 and hubby will be 75 on 6/23. However, I'd be just as happy as a loving foster grandmother with anybody's child at this point in my life. Biology is definitely NOT destiny.

Just got the news. Good to have you back in town and I look forward to meeting you in Las Vegas (along with bongi, Ramona, and others)

You're back! The Prophecy has been fulfilled!

*calling Virgin Depot to cancel the shipment for tomorrow's offering*

Thank you for the story, Ellen.

I have enough self awareness to know I'd make a horrible parent. And I'm much too selfish to want to be one.

Sili, I think it was Ellen Peck who wrote the first book on the subject of being childfree. It was "A Baby? Maybe."

When I interviewed her in the early 1970s, I already had two toddlers 14 months apart, and was divorced from a man who said he was no longer in love with me.

I do believe Ellen Peck went on to have a child, but haven't revisited that subject in years.

Thanks for your comments.

Sili, I made a few errors due to misremembering books and authors. Sorry about that.

This is a pretty interesting Wiki treatment on the history of Non-Parenting.

Please cut and paste if you're interested. Thanks. EK

(No, we've never met, even virtually. I've just been caught in the world of medicine and surgery as a patient too long, and developed an interest in seeing it from the other side. Your writing has taught me a lot, as have several other medbloggers.)

I have four comments about the vasectomy First, it really does make your sex life better. Two, there's some evidence that it's associated with a type of alzheimer's wherein the victim loses language skills. Three, you haven't lived until you ejaculate clotted blood. And last, it imparts to swinging bachelors such as yourself immunity from a variety of legal entanglements. And yes, there are too many people anyway.

I'm glad you're back. I refer some of my residents to your blog, hoping that they'll see what a "real" surgeon is all about.