The Bed In Which They Lie 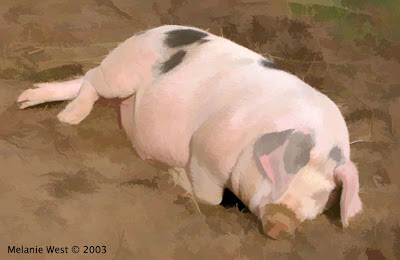 Might there actually be justice? Could it be that McCain and his lipsticked liar have overplayed their hand to the point that even voters will notice? Is it possible that the dual deceivers have devolved in desperation, doubling down on duplicity? Might a campaign based on lies be rejected? Well, it's never happened, of course. But could it, finally? Would unsustainable deficits, lack of energy plans, an unfocused response to the threat of terrorism, health care failures, education devolution be enough to make a majority of voters think seriously enough to demand straight talk from their politicians? Not to mention their free press! Nope, nope. Probably not. But a guy can dream...
I've never bought the media-enabled persona of McCain as a man of integrity; but let's give him the benefit until now. Now. Finally, it's being asked: is there anything he and his campaign have been saying of late that's remotely true? Isn't it obvious that, whoever he might have been, he's happily and without any remorse lying about pretty much everything? Pigs, pork, sex-ed. Taxes. Travels, tallies.
And here's the thing: whereas it's clear that Sarah Palin and her fight against "earmarks" is a complete fabrication, even if it weren't, WTF??? I mean we're facing outrageous deficits and our debt is intolerable, with consequences so dire that practically no one is talking about them. (Want scary? Watch this.) So even if Slippery Sarah rides in on a white horse and eliminates all the earmarks that she ever asked for (lots), turns back all the money she kept from bridge to nowhere and other porcine programs (millions), and even if she wipes out all the acoustical aims of every other politician in Congress, it'd have virtually no effect on the budgetary problems we face. So it's a diversion, and a very cynical one at that. Talk all you want about Sarah Palin, says Juggling John. The more you do, the less time there'll be to look behind the curtain.
What got me going this time? This. McCain's senior economic advisor, in a book to be released after the election, acknowledges that any president will have to raise taxes, that we simply can't sustain the current policies. And whereas McCain insists not only that he'll not raise taxes but lower them, and while he declaims against Obama for suggesting the need to raise them, the reality is that no one can or will speak about the fatuous folly. From the article, there's this:
"So why does tax-cutting mania persist among Republicans, I asked Holtz-Eakin, the McCain adviser--given...that, as Holtz-Eakin himself explain to me, taxes soon have to go up substantially in any event?
"It's the brand," he said, "and you don't dilute the brand." "
We are so screwed! I'm not so silly as to think that Obama and the Democrats will be lots better; but at least they're acknowledging the problem and saying unequivocally that the Bush tax cuts (which McCain has promised to make worse) can't be maintained.
Patriotism. Love of country. Sacrifice. Country first. What empty words; how meaningless, as enunciated by John McCain and his apologists. In these dire times, what are called for are things no one wants to face: tighten our belts; use less oil; be willing to pay more taxes to save the country; address entitlements; stop useless military programs. Talk straight about oil, debt, terrorism. But that's the sort of straight talking that if McCain was ever for, he no longer is. Run on lies and innuendo and obfuscation; pick a veep willing to do the same, willing to say anything. Tabula rasa, like George was. Prestidigitation. It's obscene. At least they admit it:
“Every day not talking about the economy, the war and how to fix a broken system is a victory for McCain,” said John Weaver, a former top strategist to the nominee who left the campaign last year. “They’re going to ride it as long as they can and as long as the mainstream media puts up every ridiculous charge.”
The only way politicians would actually stand up on their hind legs and say and do what needs saying and doing, is if the electorate were to demand it; if they'd make it clear that the kind of sleaze, distractions, and phoniness that we're now seeing, mainly coming from the McCain side, will no longer cut it. Not now. Enough. Not in these times!
Might such a rejection actually happen? Well, so far it doesn't look like it. Fed a line of b.s. for the last eight years, told not to worry, everything's fine (well, not exactly not to worry: not to worry about anything but terrorism), voters expect not to be asked to think, nor to make demands. Prefer it, no doubt. So whereas it seems our pathetic media are finally waking up and seeing McCain and his campaign for the lies and sleaze that they are, I'm far from convinced -- the opposite, really -- that it'll make much difference. We're not about solutions in this country. We're about ignoring the facts, wishful thinking, scapegoating, and referring to anyone who points it out as part of the "hate America first crowd." Until that changes, nothing else will. And if it doesn't change in this election cycle, it'll be moot. The future will have slipped away irretrievably. Party on, dudes. Why not? They're playing the tune, and we're dancing. Party like there's no tomorrow.
Posted by Sid Schwab at 10:50 AM